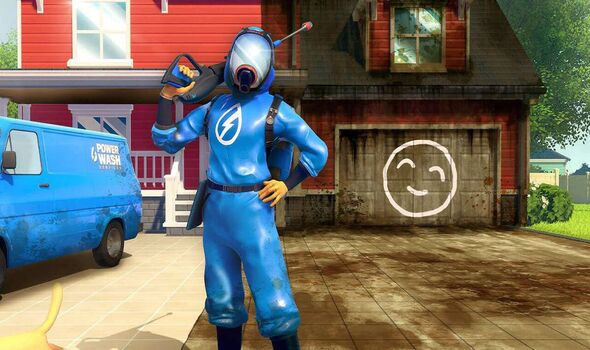 After racking up a surprisingly large following on PC and Xbox, PowerWash Simulator has been announced for PlayStation 4, PS5 and Nintendo Switch. As the name suggests, the aim of PowerWash Simulator is to wash away grime. It may not sound as exciting as something like Call of Duty or Fortnite, but fans and critics have been quick to praise the zen-like action. If you’re looking to practice your power washing technique, then you’ll be pleased to find out that PowerWash Simulator has a January 31 release date on PlayStation and Switch.

Better yet, PowerWash Simulator will launch alongside free Tomb Raider DLC on all platforms.

That’s on top of Lara’s most valuable exhibits, as well as some of her off-road vehicles.

“For the Tomb Raider Special Pack, we focused on the illustrious Croft Manor, including its grounds and some of Lara’s trusty vehicles that have been muddied out on (and off!) the road,” reads a recent blog post.

“In the Special Pack, we’ve left the perilous plots to Lara whilst challenging our players to undertake the most hazardous escapade yet… cleaning her stately home!

“Only the very best will do when it comes to the Croft residence; so unwind and blast away every speck of dirt you can track down, whilst Lara regales you with tales of past adventures.”

The base game – which is out now on Xbox and PC – has an “overwhelmingly positive” rating on Steam, where thousands of fans have praised the relaxing gameplay.

One reviewer calls it a work of art and a masterpiece. While another player with over 200 hours of gameplay, describes it as one of the best games ever made.

“Wash away your worries with the soothing sounds of high-pressure water.

“Fire up your power washer and blast away every speck of dirt and grime you can find. Build your own power-washing business and unlock new tools, upgrades and more – all with the simple satisfaction of power-washing to a sparkling finish.”