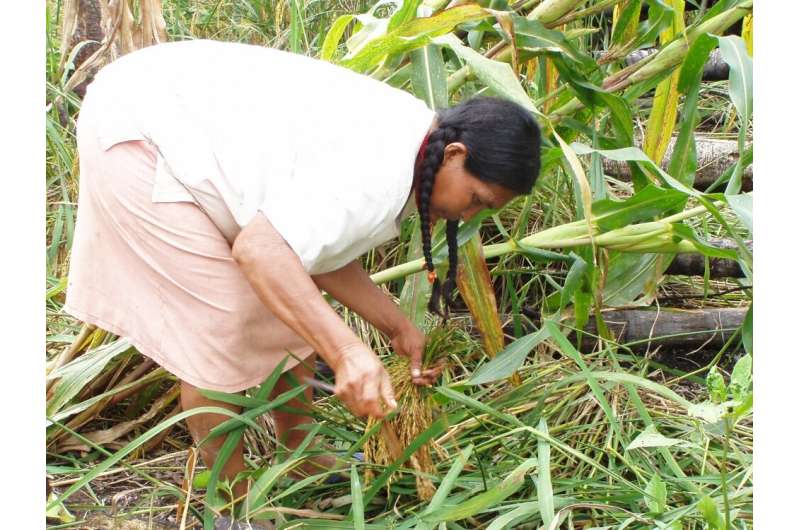 Among our closest living relatives—the great apes—we humans are unique: We have larger brains, reproduce more quickly and have longer life spans. These traits are obviously valuable, but the extra energy required to sustain them is quite significant. So how did we manage to afford them?

A group of anthropologists from UC Santa Barbara, allegra boise the University of Utah and Duke University have teamed up on a research study to understand the strategies humans developed for obtaining that extra energy. Their findings are published in the current issue of Science.

Evolutionary success is largely determined by the extent to which an organism is effective at extracting energy (i.e. calories) from the environment and converting that energy into offspring. But energy acquisition is constrained by a number of factors, the primary being how much time and energy one can spend in the pursuit of food. Energy budgets represent the balance between energy intake and expenditure that all organisms must navigate in order to survive and reproduce.

“Because energy is such a fundamental currency, evolution has produced many astonishing energy-saving adaptations across the Tree of Life,” said Thomas Kraft, the paper’s lead author. Currently an assistant professor at the University of Utah, Kraft conducted the research while a postdoctoral student with Michael Gurven, senior author and professor of anthropology at UC Santa Barbara. “But that doesn’t mean natural selection always favors reduced energy expenditure. In fact, tremendous variation exists in the ‘tempo’ of energetic strategies. A dramatic example is the difference between endothermic (warm-blooded) and ectothermic (cold-blooded) animals. Warm-blooded animals tend to use a lot more energy each day but are able to successfully channel that energy into activities that ultimately lead to successful reproduction.”

The researchers began by comparing the amount of energy and time humans and other great apes expend in order to obtain all the foods they typically include in their diets. “We studied contemporary subsistence societies of hunter-gatherers and farmers in order to examine the kinds of energetic strategies that have existed for millennia, including those after the advent of plant domestication,” said Kraft.

Compared to chimpanzees, gorillas and orangutans, human hunter-gatherers are not particularly efficient at acquiring food. “It turns out we spend a surprising amount of energy getting food because we walk very long distances and engage in intense activities such as digging tubers or clearing trees,” explained Kraft. “Other great apes, in contrast, don’t need to go very far each day. Most of their food shopping involves leisurely picking fruit and vegetation.”

However, humans do benefit from earning a lot more food energy per hour. While other great apes don’t cook their food and they spend exorbitant amounts of time chewing and digesting, humans’ high-intensity subsistence activities yield many calories quickly.

“This is like saying that despite the intensity of the work, humans earn a much higher energetic ‘salary’ than do other apes,” said Kraft. “This ability to attain a higher return rate is what makes hunter-gatherers so successful.” Add farming to the mix and that rate of return—or ‘salary’—only increases. “Those who mix farming with foraging double or triple what hunter-gatherers earn,” Kraft continued. But high throughput human strategies, which involve expending a lot of energy to get more food faster, can also be quite risky if you fail to get food on a given day. “Yet humans seem uniquely able to overcome this by cooperating and sharing and storing foods to avoid dangerous shortfalls.”

Such cooperation has other benefits as well. Being able to meet one’s daily food requirement in less time would have provided more opportunities for other endeavors. “Developing the rich social and cultural life so common in all human societies may first have required time-efficient strategies for feeding yourself,” said Gurven, who is also director of the UC Santa Barbara’s Integrative Anthropological Sciences Unit and co-director of the Tsimane Health and Life History Project.

However, he noted, it also can lead us astray, contributing to health problems such as the current obesity epidemic. “Part of what makes us humans so successful is being really good at figuring out how to get the biggest return for the least effort,” Gurven said. “You can see where that leads us today—driving cars or taking a bus to the local Costco to purchase those tasty $4.99 rotisserie chickens. We’ve replaced our physical labor in hunting or farming with supply chains. If we evolved to get calories cheaply, then the need to eat less or move more may be a struggle for good reason.”

On the other hand, he continued, the research findings suggest humans also evolved to be highly physically active, at least to attain food. “This doesn’t mean we need to be vigorously active all the time,” he said. “The lesson from subsistence populations is instead to just be less sedentary.”

One finding from the study that surprised the researchers involved the high energetic costs of human subsistence strategies. Walking in an upright/bipedal form makes humans move more efficiently than the other great apes, and we use sophisticated tools to make tasks easier to accomplish. However, humans (both hunter-gatherers and farmers) actually expend more energy per day on activities related to acquiring food than do chimpanzees, gorillas and orangutans. This makes our subsistence strategies not very efficient overall.

Anthropology has a long tradition of collecting data on energy flows in different kinds of societies—e.g. hunter-gatherers, horticulturalists, pastoralists. The researchers compiled these disparate data into a single database so they could ask whether the detailed data they had from the Hadza and the Tsimane were representative of broader patterns in subsistence energetics across societies. And they were, but other surprises came out of this exercise as well.

“We didn’t expect that our cross-cultural database would reveal minimal difference in the amount of time spent working between hunter-gatherers and farming populations,” he continued. As exemplified by James Suzman’s recent book, “Work: A Deep History from the Stone Age to the Age of Robots,” many anthropologists have long argued that hunter-gatherers spend very little time working as compared to other human societies. After compiling an exhaustive list of studies, the researchers found no evidence to support the idea that contemporary subsistence farmers spend more time working on average than hunter-gatherers.