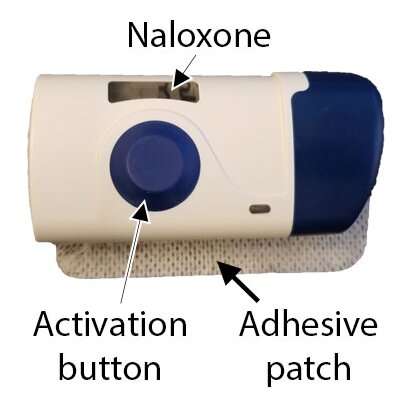 A research team at the University of Washington has developed a wearable device to detect and reverse an opioid overdose. The device, worn on the stomach like an insulin pump, senses when a person stops breathing and moving, and injects naloxone, a lifesaving antidote that can restore respiration.

The results demonstrate the proof-of-concept of a wearable naloxone injector system, according to the paper published Nov. 22 in Scientific Reports.

“The opioid epidemic has become worse during the pandemic and has continued to be a major public health crisis,” said lead author Justin Chan, a UW doctoral student in the Paul G. Allen School of Computer Science & Engineering. “We have created algorithms that run on a wearable injector to detect when the wearer stops breathing and automatically inject naloxone.”

Co-author Jacob Sunshine, an associate professor of anesthesiology and pain medicine at the UW School of Medicine, said one of the unique aspects of opioid overdoses is that naloxone, aricept side effects to report to doctor a benign drug, is highly effective and can save lives if it can be administered in a timely fashion.

The UW team is looking to make these devices widely available, which would first require approval by the U.S. Food and Drug Administration. The FDA is currently working to accelerate efforts to address this critical public health problem and has recently published special guidance on emergency-use injectors. 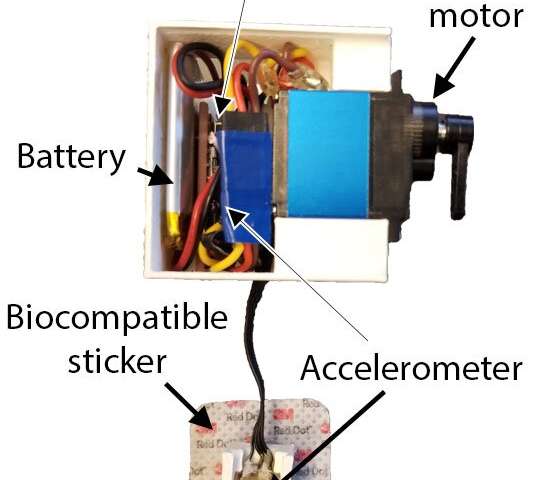 In a multiyear collaboration, the UW investigators worked on the prototype with West Pharmaceutical Services of Exton, Penn, which developed a wearable subcutaneous injector that safely administers medications.

The research team combined this injector system with sensors and developed an algorithm to detect the life-threatening pattern of respirations that occur when people experience opioid toxicity.

Co-author Shyam Gollakota, a UW professor in the Allen School, said the device could help people at different stages of opioid-use disorder to avoid accidental death.

“This wearable auto-injector may have the potential to reduce fatalities due to opioid overdoses,” he said. “We are hopeful it can have a tangible impact on a big source of suffering in this country.”

The pilot device includes a pair of accelerometers that measure respiration and an onboard processor that detects the halt of motion associated with breathing. The wearable system, which has received regulatory approval in the United States, activates the injector in the presence of prolonged apneic events.

The pilot device also can transmit data about breathing rates and apneic motion to a nearby smartphone via Bluetooth.

To test the device, a clinical study was conducted with volunteers in a supervised injection facility in Vancouver, B.C., and a parallel clinical trial was conducted in a hospital environment among volunteers who manifested signs of apnea by holding their breath.

The team recruited 25 participants at the Vancouver site. The sensors were able to accurately track respiration rates among people with opioid-use disorder. Further, the device was able to detect non-medical, opioid-induced apnea, a breathing pattern that commonly precedes a potentially fatal overdose. The testing in Vancouver measured breathing patterns only to develop the respiratory algorithm and did not involve injection of naloxone, which was administered only in the second study involving healthy human volunteers who did not take opioids.

In the second study, 20 participants simulated overdose events in a hospital setting by breathing normally, then performing a breath hold for 15 seconds to mimic an apneic event. When the wearable system detected that the subject had not moved for at least 15 seconds, it activated and injected naloxone into the participant. 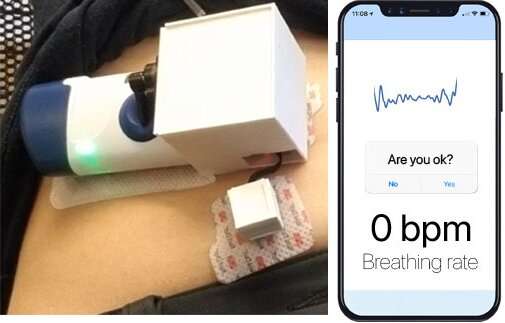 Following device actuation, blood draws taken from study participants confirmed that the system could deliver the antidote into the circulatory system, showing its potential to reverse opioid overdoses.

“We have enjoyed collaborating with the UW research team at bringing together this expertise in cutting-edge biosensing and wearable drug-delivery technologies,” said Alex Lyness, senior manager of research and technology at West Pharmaceuticals. “We are pleased to have been able to contribute to this project and prototype system that is intent on solving such a significant unmet need.”