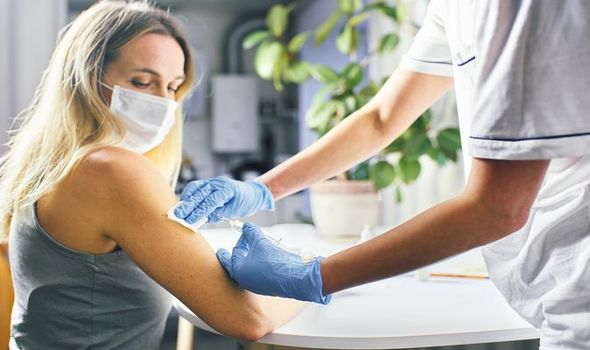 In the latest compelling evidence of the need for booster shots, researchers found protection fell gradually from 90 days after vaccination. After six months, the risk of testing positive was almost three times higher when compared with the first three months of being double-jabbed. Experts said the findings, published in the British Medical Journal, suggested dangers of a breakthrough infection increased progressively with time. However, the study did not look at whether people were still protected from severe illness.

The Research Institute of Leumit Health Services looked at data from more than 80,000 people in Israel, including around 8, 100mg caffine pills lb 000 who tested positive for coronavirus between May and September.

Dr Peter English, a retired consultant in communicable disease control, who was not involved in the research, said: “The fact that immunity wanes over a matter of just a few months matters, particularly with regard to transmission rates.”

Most people in Israel got the Pfizer vaccine so the results are not directly applicable to the UK, where the AstraZeneca jab was also used. Dr English also noted that the UK introduced a longer 12-week dosing interval between the first and second Pfizer jabs.

He said: “The study was undertaken in a population in which the second dose was routinely given four weeks after the first dose. We now have good evidence that the longer interval between first and second doses used for most people in the UK generates better, probably longer-lasting, immunity. It is not unlikely that immunity in the UK would not fall as far, as soon, for this reason.”

But he added: “The findings that immunity wanes over as little as three months is further support for the idea that a third dose of vaccine will routinely be needed to give better protection against serious disease and, importantly, if we are to get close to or achieve herd immunity, against infection and transmission.”

Separate evidence from the Government’s Scientific Advisory Group for Emergencies (Sage) shows that, for the Oxford/ AstraZeneca vaccine, protection against infection with symptoms falls from 65 percent three months after the second dose to 45 percent at six months. For the Pfizer/BioNTech jab, the drop was from 90 to 65 percent.

Protection against hospitalisation also fell from 95 to 75 percent for AstraZeneca and 99 to 90 for Pfizer. Leading health charities are today joining with the Government and NHS to urge the most vulnerable to get their Covid vaccinations.

Groups including the British Heart Foundation, Carers UK, Diabetes UK, Epilepsy Action and Cancer Research UK will urge members to get their first, second and booster doses when invited. People who have severely weakened immune systems, and may therefore not respond as well to the jabs, are also being encouraged to get third primary doses.

Health and Social Care Secretary Sajid Javid said: “With winter approaching it’s so important that those who are at risk from the virus are protected.The vaccines are safe and effective and are helping us build a wall of defence against Covid-19. Please come forward for yours as soon as you can.”

More than 16 million people have had a booster or third primary inoculation in the UK. This equates to just over a third of the 46 million people who have received their first two doses. This week the National Booking Service opened to people in their 40s to book their booster, which they can get once six months have passed since their second jab.

Following concerns about a wave of cases sweeping Europe, sparking the return of lockdowns in some countries, ministers are urging everyone who is eligible to take up the offer as soon as possible. The Department of Health and Social Care said people who have their booster by December 11 will have high protection in time for Christmas Day.

Vaccines minister Maggie Throup said: “This partnership with health charities is vital to allow us to reach the groups most in need of a Covid-19 vaccine to keep them safe from the virus. It’s brilliant to see so many different organisations step up to help get this message to those most at risk.”

The call came as a further 43,676 Covid-19 cases and 149 deaths within 28 days of a positive test were reported across the UK yesterday. Meanwhile, the former head of the Vaccines Taskforce called for the risk of a future pandemic to be put on a par with defence threats.

Dame Kate Bingham urged ministers to ensure the country was better prepared for future diseases. She told BBC Radio 4’s Today programme: “This pandemic, devastating how it was, could have been a lot worse. It could have been more lethal – it could have been a virus that mutates much more rapidly, which means you can’t develop vaccines. So this is not the time to sit back on our laurels. Pandemic threats are as serious as defence threats and should be supported in the same way.”