Scientists around the world have been conducting extensive research to develop vaccines that can help us fight the pandemic. To this end, a significant amount of progress has already been made as evident by the several vaccines that have already received emergency use authorization (EUA) from global regulatory bodies.

Intranasal (IN) vs. intramuscular (IM) vaccines 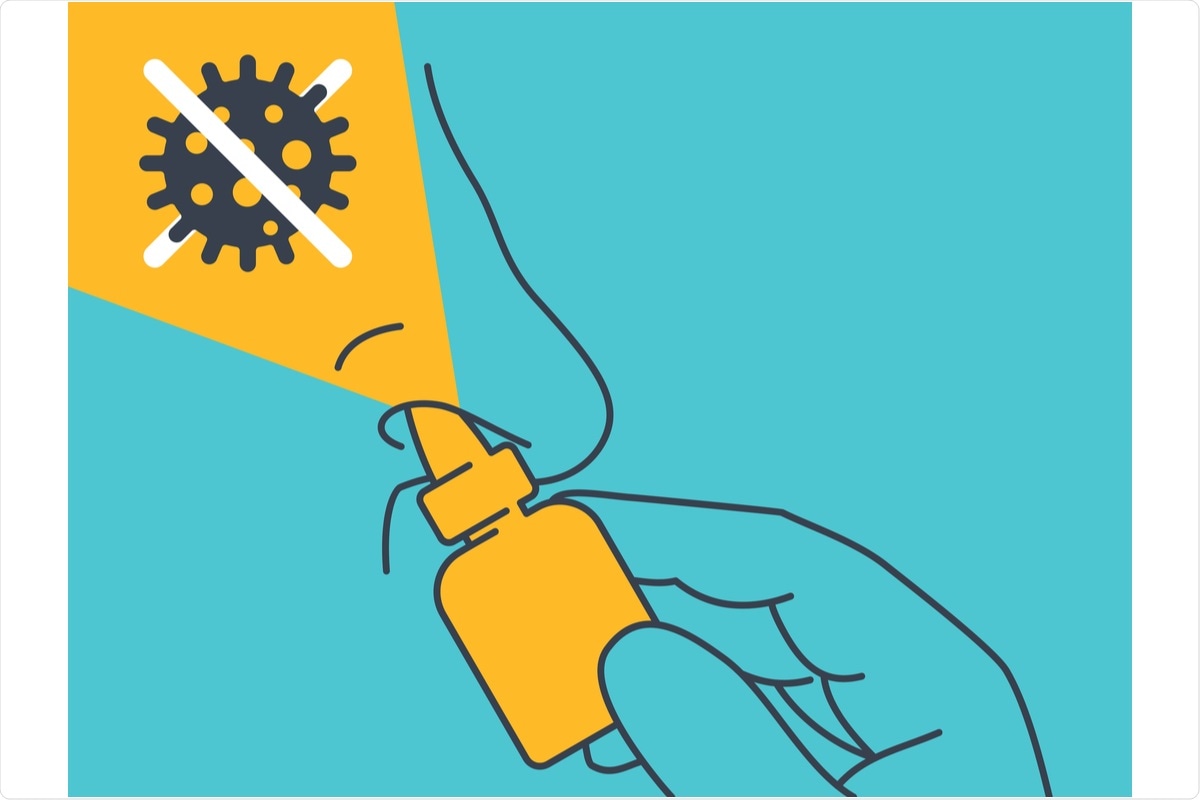 Scientists have conducted several non-human primate (NHP) challenge experiments, during which many vaccines were found to successfully reduce or prevent viral replication in the lower respiratory tract. Despite these encouraging observations, subgenomic and genomic viral RNA has been found in the nasal sample swabs of tested animals. Although vaccination is expected to prevent or reduce the severity of the disease, infection of the upper respiratory could still occur and contribute to viral transmission.

Research has shown that intramuscular (IM) vaccines, despite producing systemic immunoglobulin G (IgG) responses, produce a poor mucosal response. Local antigens, particularly those that reside in the upper respiratory tract, are required to elicit mucosal immunity. To address this issue, scientists have published a new study in the journal Science Translational Medicine that evaluates the use of ChAdOx1 nCoV-19 as a potential intranasal (IN) vaccine candidate in hamster and rhesus macaque models.

Three groups of 10 Syrian hamsters each were vaccinated with a single dose of ChAdOx1 nCoV-19 28 days before the viral challenge. The first group received the vaccine via the IN route, while the second group received it via the IM route.

For inoculating the first group, scientists used the SARS-CoV2/human/USA/RML-7/2020 isolate containing the D614G mutation in the S protein. The third group served as the control and received ChAdOx1 green fluorescent protein (GFP).

Oropharyngeal swabs were taken from 6 animals per group on the 7th day post-infection (DPI). Viral RNA was significantly reduced in IN-vaccinated hamsters as compared to the control group on 1-3 and 6-7 DPI. For the IM-vaccinated group, a reduction was only observed at 7 DPI.

Viral RNA and infectious virus detected in IN animals were much lower than that of the control group. However, the same result did remain true when comparing the IM animals to the controls. The researchers repeated the above experiment in a direct contact horizontal transmission setting. As in the previous experiment, IN-vaccinated animals showed higher neutralizing antibodies as compared to those that received the vaccine IM.

Oropharyngeal swabs were also analyzed, which demonstrated that the IN animals had a significantly lower amount of viral RNA and infectious virus as compared to the control. Once again, no marked difference was found between the IM group and the controls. 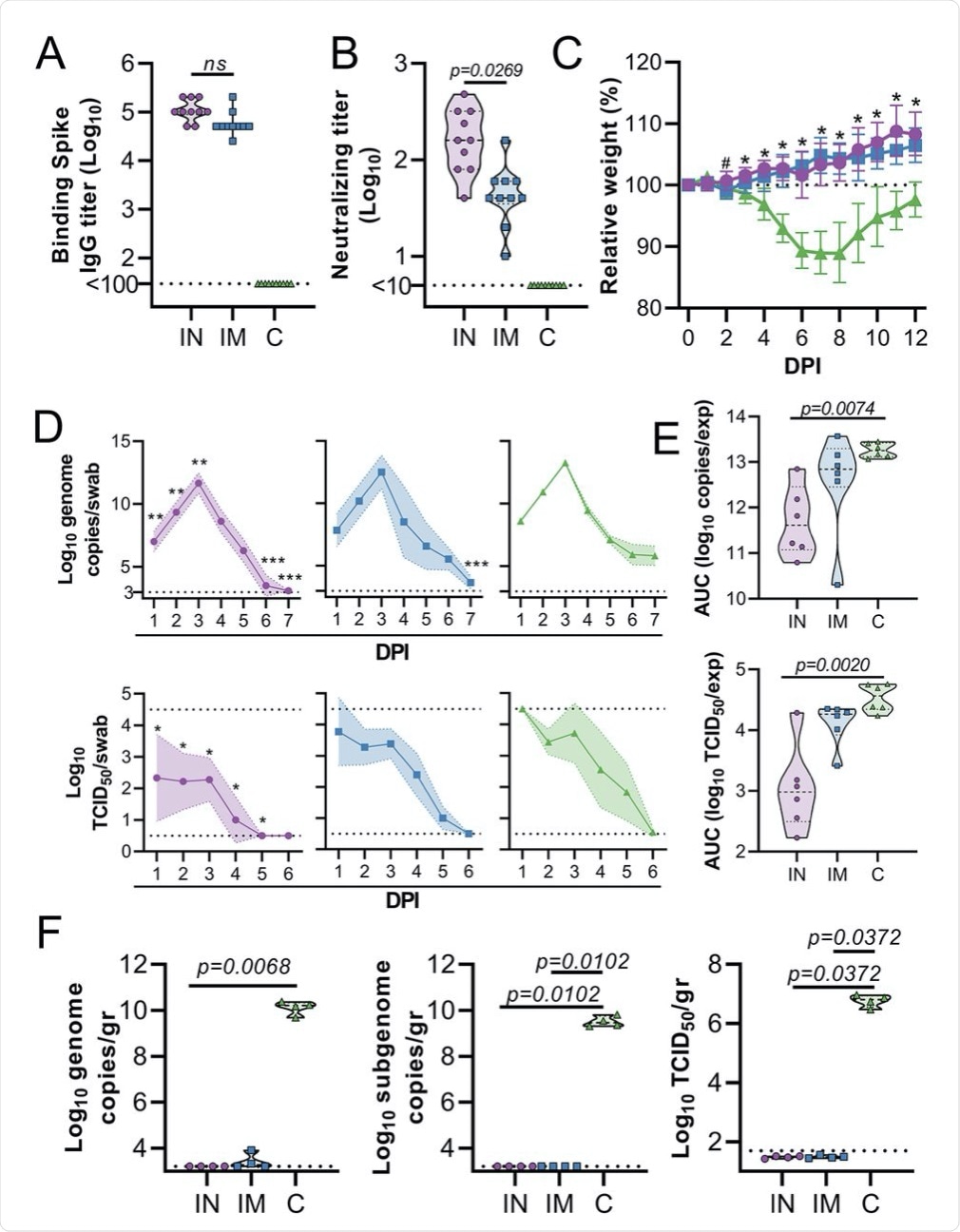 Hamsters (n=10 per group) were vaccinated via the IN route (purple), IM route (blue) or with control (C) vaccine ChAdOx1 GFP via the IM route (green). (A) Binding antibody titers against SARS-CoV-2 S protein in serum are shown for day 28 post-vaccination. (B) Virus neutralizing antibody titers in serum are shown for day 28 post-vaccination. For (A and B), the geometric mean and 95% confidence interval are shown. Dotted line = limit of detection.(C) Relative weight was measured as a percent of starting weight at indicated days post-inoculation (DPI) with SARS-CoV-2. #p<0.05 between IN and control group; *p<0.05 between vaccinated groups and control group. Geometric mean and 95% CI are shown. (D) Viral load and viral titer in oropharyngeal swabs are shown as geometric mean (symbols) and 95% confidence interval (shade). *p<0.05; **p< 0.01; ***p< 0.001 relative to controls at the same time point. Dotted line = limit of detection. (E) Area under the curve (AUC) analysis is shown for viral load and titer detection in oropharyngeal swabs over 7 days post-inoculation. (F) Viral load and titer in lung tissue isolated at 5 DPI are shown. For (E and F), the dashed line within the violin plots indicates median; dotted lines within the violin plot indicate quartiles. Statistical analyses were done using mixed-effect analyses (C), two-way ANOVA (D), or Kruskal-Wallis test (E and F).

The success in hamster models prompted scientists to study the impact of IN vaccination in rhesus macaques. These studies confirmed the ability of ChAdOx1 nCoV-19 to produce a robust immune response.

Similar to the results produced in the hamster studies, a higher fraction of IgA to total Ig was also detected in IM vaccinated rhesus macaques as compared to controls. S and receptor-binding domain (RBD)-specific IgG antibodies were also detected in serum and nasal samples. The researchers also observed that antibodies in vaccinated animals promoted natural killer cell activation and phagocytosis. 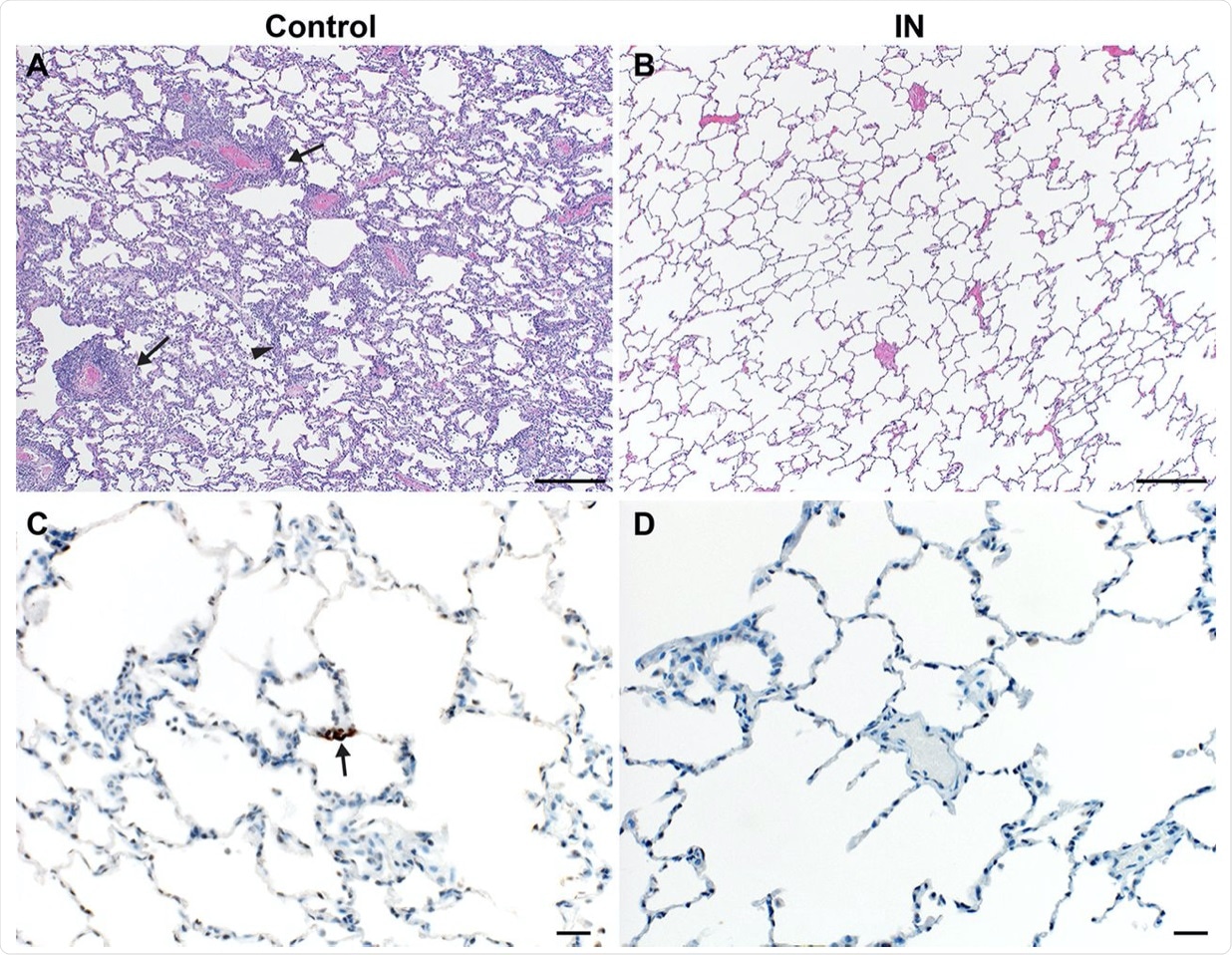 Lung pathology is reduced in ChAdOx1 nCoV-19 IN-vaccinated rhesus macaques after SARS-CoV-2 challenge. (A and B) Lung tissue sections isolated from IN-vaccinated (A) and control (B) rhesus macaques were stained with hematoxylin and eosin. Scale bar = 200μm. (A) Interstitial pneumonia (arrowhead) and lymphocytic perivascular cuffing (arrow) were observed in control samples. (B) No pathology was observed in IN-vaccinated lung samples. (C and D) Immunohistochemistry for SARS-CoV-2 antigen (brown) reveals rare type I pneumocyte immunoreactivity (arrow) in control samples (C) but no immunoreactivity in IN-vaccinated samples (D). Scale bar = 20μm.

The studies described here show that the ChAdOx1 nCoV-19 vaccine protects against SARS-CoV-2 containing the D614G mutation. Future studies will need to determine whether IN vaccines provide sterilizing immunity and whether IN-vaccinated individuals are still vulnerable to infection of the upper respiratory tract.