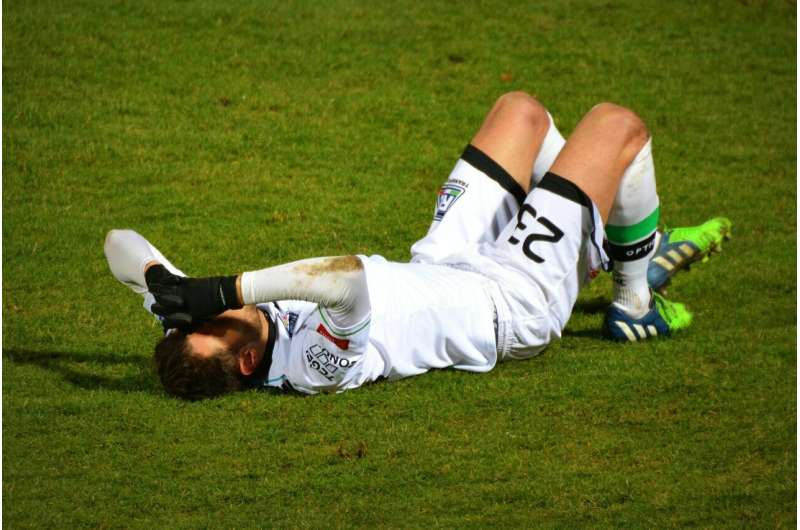 A new study has used a state-of-the-art blood test to track damage to the brain in people who have sustained traumatic brain injury (TBI). Measuring the protein biomarker in the blood will provide a simpler, more accurate way to predict clinical outcomes and may help to identify those at higher risk of developing dementia. The study is published today (29 September) in Science Translational Medicine.

Around 50 million people each year worldwide experience TBI as a result of head injury. In the brains of these individuals, the nerve cells encounter severe stretching and sheering forces which cause damage to their axons, the part which transmits electrical signals. Axonal damage is the best predictor of clinical outcomes and recovery but has been difficult to measure in patients.

The team from the UK Dementia Research Institute’s (UK DRI) Care Research and Technology Centre, based at Imperial College London, set out to identify a chemical that could be easily detected in the blood—a biomarker—that would accurately reflect this axonal damage in the brain after TBI. To do this they harnessed cutting-edge technology called single molecule array (SiMoA) that can measure sub-femtomolar (10-16) levels of chemicals in the blood.

In this multicentre study, the researchers began by detecting proteins that are important to the structure of the nerve cell axons. They found that measuring blood levels of neurofilament light, a protein important for axonal structure provided a remarkably accurate long-term prognosis for the patient.

Dr. Neil Graham, joint first author and Alzheimer’s Research UK Clinical Research Fellow based at the UK DRI’s Care Research and Technology Centre, based at Imperial College London, said that he’s “extremely excited by the ultrasensitive blood test technology we used here as it has opened up a whole new world of possibilities when it comes to precise injury diagnosis and prediction of outcomes after head injury. This is particularly useful in the area of dementia risk assessment after TBI, which is very challenging at present. If we could roll the neurofilament light test out across the country, it would be hugely impactful. We’re gearing up to offer it to NHS patients at Imperial in the near future.”

Dr. Karl Zimmerman, joint first author and postdoctoral researcher based at the UK DRI’s Care Research and Technology Centre, based at Imperial College London, said that “these results are exciting as they pave the way for the use of these advanced biomarkers in the assessment of head injuries in other contexts. We have studied and shown that there may be similar changes occurring in professional athletes exposed to head injuries. We’re setting up more research to look at this in detail to improve care of sportspeople concerned with later life risk of dementia.”

Professor David Sharp, senior author of the paper and Director of the UK DRI’s Care Research and Technology Centre based at Imperial College London, said that “outcomes after TBI are very difficult to predict. This is a major challenge for doctors trying to care for patients recovering from head injuries of all severities. What we need are more accurate diagnostic tests that can be used in our major trauma units and clinics. Our work shows that measuring neurofilament light soon after head injury helps predict who will develop long-term problems. We are applying this in various contexts, including for the investigation of sporting TBI, and will be investigating whether this blood test can be used to predict those at high risk of developing dementia”

Dr. Rosa Sancho, Head of Research at Alzheimer’s Research UK, said that “traumatic brain injury is a risk factor for dementia, and identifying the long-term impact of individual head injuries remains an important goal for research. This work gets us closer to a blood test able to predict how brain changes develop up to one year after injury. Dementia develops over many years and we need to build on these findings to help improve longer-term prognosis and to reliably determine an individual’s risk of dementia following a head injury.”

“As the UK’s leading dementia research charity, we’re pleased to have funded both Dr. Graham’s clinical work and the UK DRI. We couldn’t do either without the continued dedication of our supporters.”

The study involved over 200 patients who had experienced moderate to severe TBI, recruited from eight major trauma centres across Europe. In 56% of cases the injuries were classed as ‘high energy’, involving falls from over 3 metres or collisions at more than 30km/hour, with the majority of these caused by road traffic accidents.