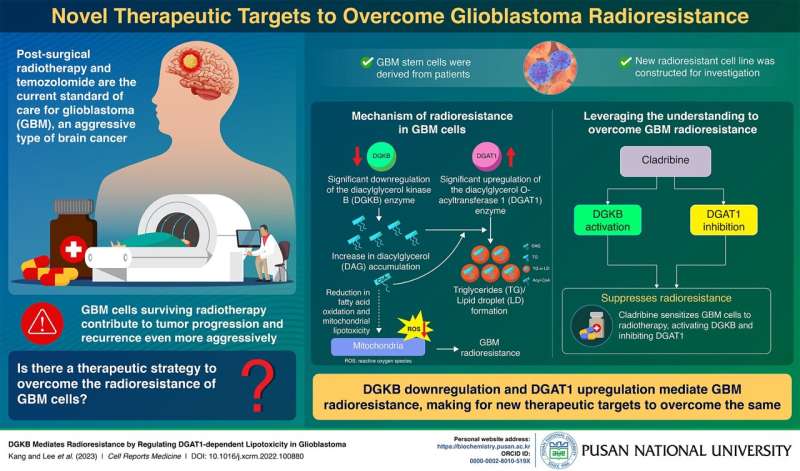 Post-surgical radiotherapy and temozolomide, coumadin cold medicine interactions a chemotherapeutic drug, targeting post-cell division is the current standard of care for glioblastoma (GBM)—the most prevalent and lethal primary tumor of the central nervous system. An aggressive form of brain tumor, GBM is highly resistant to current therapies with high mortality and frequent recurrence.

Moreover, GBM cells are highly radioresistant and contribute to tumor progression and recurrence even more aggressively when surviving radiotherapy. Thus, there is an urgent need to revise the standard treatment strategy and develop a new therapy to overcome the radioresistance of GBM cells.

To this end, a team of researchers from Korea and U.S. led by Professor BuHyun Youn from Pusan National University in Korea has now unveiled a plausible mechanism underlying the radioresistance of GBM cells that involves regulating an internal steady state of lipid within the cells, known as “lipid homeostasis.”

“Put simply, radioresistant GBM cells prefer to stock up on fatty acids instead of utilizing them as an energy source in order to reduce mitochondrial reactive oxygen species that may cause damage to their DNA, RNA, and proteins, and, in turn, cell death,” explains Prof. Youn.

In their study published in Cell Reports Medicine, the researchers derived GBM stem cells from patients and established radioresistant cells for investigation. They showed that diacylglycerol kinase B (DGKB), a regulator of the intracellular level of diacylglycerol (DAG), was significantly suppressed in radioresistant GBM cells.

This, in turn, increased DAG accumulation and decreased fatty acid oxidation, reducing mitochondrial lipotoxicity (harmful lipid accumulation in non-adipose tissues) in GBM cells and contributing to their radioresistance. Further, the team showed that the ionizing radiation induced an increase in the level of diacylglycerol acyltransferase 1 (DGAT1), an enzyme that catalyzes the formation of triglycerides from DAG.

Armed with this understanding, the researchers further demonstrated that the genetic inhibition of DGAT1 suppresses radioresistance. In addition, they discovered that cladribine, a clinical drug, activates DGKB and inhibits DGAT1. This action sensitized GBM cells to radiotherapy both in vitro and in vivo ( in mouse models).

“Our research has revealed cladribine as a radiosensitizer for GBM treatment by drug repurposing, which can offer multiple advantages,” says Prof. Youn. “As an FDA-approved oral drug, the side-effects of cladribine are quite manageable and it has been well evaluated for pharmacokinetics. Additionally, the clinical trial period will be considerably shorter than that required for new drug development. In this regard, cladribine could become a standard future treatment for GBM.”

Taken together, this study demonstrates that DGKB and DGAT1 are potential therapeutic targets for overcoming GBM radioresistance. Moreover, drugs like cladribine could potentially replace existing treatment options with a new and more effective strategy.