You might stand up and do a few stretches when you work from home, but would you sink into a lunge at the office? Genevieve Healy wouldn’t hesitate – but that’s because her own job involves changing workplace culture to reduce sitting.

“In meetings I’ll alternate sitting and standing, para que es cilostazol 100 mg and with meetings of just one or two people, I’ll make it a walking meeting. I do emails standing up – a sit-stand desk makes it easy to change position – and I might do calf raises while I’m standing,” says Healy, lead researcher of BeUpstanding, a free program based at the University of Queensland to help organisations nudge deskbound staff into sitting less. 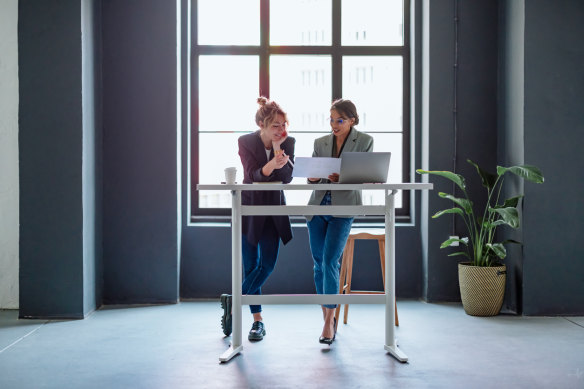 As risky activities go, sitting seems tame compared to, say, perching on scaffolding, but it’s earned a place on Safe Work Australia’s list of workplace hazards – along with asbestos exposure and coal dust. Too much uninterrupted sitting is now linked to a list of problems: a greater risk of heart disease, type 2 diabetes, some cancers, lower back pain, depression and even lower bone density.

In a perfect world, our working days would involve no more than five hours sitting, we’d all have a sit-stand desk, there’d be more reasons to move – like using printers located away from our desks – and we’d prioritise a walk at lunchtime, says Professor David Dunstan, Head of the Baker-Deakin Department of Lifestyle and Diabetes in Melbourne.

“Standing doesn’t deliver the same benefits as moving does but it’s an improvement. The advantage over sitting is that it increases blood flow and engages postural muscles that keep us upright – these muscles aren’t switched on when we sit,” he says.

“Changing posture throughout the day is essential for preventing musculo-skeletal problems including back pain,” explains Dunstan who sets a timer prodding him to stand up and move every 30 minutes. “I used to get odd looks in meetings when I stood up and moved around but I don’t any more. In meetings at the Baker Institute and Deakin University we announce at the start that everyone should feel free to get up and move.”

So how far have Australia’s workplaces come in reducing uninterrupted sitting?

“We’re making some progress. Sit-stand desks are generally standard where I work, and organisations that are renovating or building new offices increasingly include height adjustable desks, “he says. “But we still have a way to go compared to countries like Denmark and Finland where offices are more conducive to movement.”

Both he and Healy were involved in SMART Work and Life, a new study of almost 800 UK workers published in The British Medical Journal that found that changing the office environment slashed their sitting time by more than an hour – an improvement that continued 12 months later. Some workers also reported less pain in the lower body.

What made the difference?

The use of sit-stand desks, motivational posters, standing meetings, relocation of printers and waste bins – and ‘workplace champions’, staff members trained to encourage their colleagues to sit less. These champions helped by being role models themselves, linking colleagues to online education sessions on breaking up sitting, and organising ‘sitting less’ challenges.

Champions are also recommended by BeUpstanding, which includes training for them in its online toolkit.

But it’s moving more, not just standing up more often, that’s the big challenge with both working in the office and working from home, says Dunstan.

“Studies have found that uninterrupted sitting is more likely when you work from home, especially if your normal commute involves walking or cycling. Sometimes people work longer hours at home too.”

And if you think concentration will suffer if you keep standing up to move, it’s more likely that breaking up sitting has brain benefits too.

“For one thing, it improves both blood flow to the brain as well as glucose uptake in the brain,” Dunstan explains.

It might even boost your memory. Earlier research by the Baker Institute on the effects of movement on a six and half hour sitting session found that standing up and moving every 30 minutes improved working memory.

Walking before work could deliver another bonus, he adds – the same study found that a 30 minute walk before the sitting session raised levels of BDNF, a brain chemical that improves brain function.

“Ideally we need both – regular breaks from sitting and a commute to work that includes some walking.”

Make the most of your health, relationships, fitness and nutrition with our Live Well newsletter. Get it in your inbox every Monday.