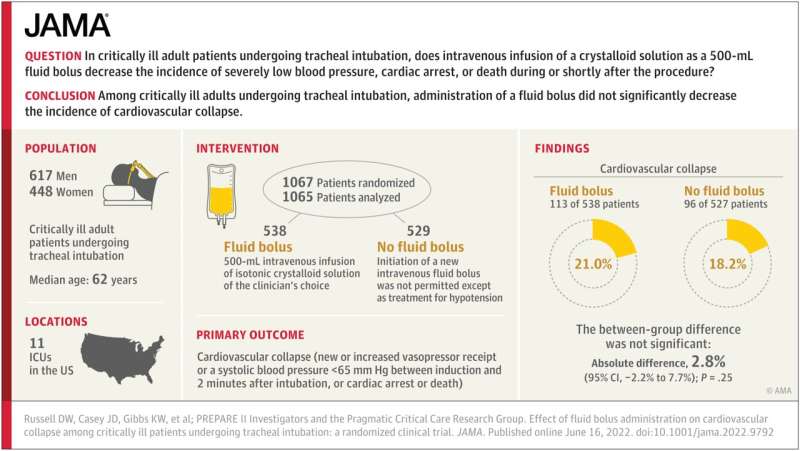 New findings from University of Alabama at Birmingham researchers provide new details that may determine whether implementing a fluid bolus before tracheal intubations prevents circulatory failure.

Nearly one in five patients undergoing intubation in the intensive care unit experiences cardiovascular collapse, defined as severe hypotension, lo necesario para renovar dni vasopressor administration, cardiac arrest or death. An intravenous fluid bolus—salt water or saline—is commonly administered before or during a tracheal intubation in critically ill patients to try to prevent cardiovascular collapse. This practice is also widely recommended in expert guidelines for doctors who perform tracheal intubation and is given to millions of patients worldwide each year, but it was still unknown whether fluid bolus was effective.

The study, published in the Journal of the American Medical Association, revealed that fluid bolus administration, contrary to the study hypothesis and many expert recommendations, did not significantly decrease the incidence of cardiovascular collapse in this population.

“The PREPARE II results have been humbling, as they conclusively demonstrate that a standard therapy that has been given routinely for decades to millions of patients to try to prevent a dangerous complication of tracheal intubation is simply not helpful, and could potentially even make things worse in some patients,” Russell said. “I hope this leads to physicians’ focusing on other factors that improve outcomes when performing the complex, high-risk procedure of tracheal intubation in the ICU. However, this also shows we need to study other treatments to take its place that hopefully will be able to prevent cardiovascular collapse.”

The randomized clinical trial enrolled nearly 1,100 critically ill adults undergoing tracheal intubation with sedation at 11 intensive care units as part of the Pragmatic Critical Care Research Group across the United States between February 2019 and May 2021. The incidence of cardiovascular collapse was 21% with administration of a fluid bolus compared with 18.2% without administration of a fluid bolus—a difference, Russell says, that was not statistically significant.