Medical residents have cleared many hurdles to get where they are, as detailed in Medscape’s Residents Salary and Debt Report 2022, which explains their challenges with compensation and school loans as well as long hours and problematic personal relationships.

Whereas 72% of residents described themselves as “very satisfied” or “satisfied” with their professional training experience, only 27% felt that highly about how well they’re paid. Satisfaction levels increased somewhat farther into residency, reaching 35% in year five.

Respondents to Medscape’s survey described mixed feelings about residency, with some concluding it is a rite of passage.

Do Residents Have It Easier Today?

If so, coop renovation rules is that rite of passage getting any easier? You’ll get different answers from residents and physicians.

Medscape asked respondents whether their journey to residency was made easier once the Step 1 exam was converted to pass-fail, and interviews brought online, because of the COVID-19 pandemic.

Many residents conceded their journey became easier, less stressful, and less expensive under the new Step 1 formats. One respondent said he was freed up to focus more intently on higher-yield academic goals such as research. 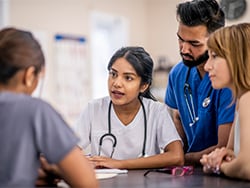 Another respondent called the pass/fail change a “total game-changer,” as it lets applicants apply to all specialties while having other qualifications than test scores considered. A resident who took Step 1 before pass/fail was instituted described the “insurmountable stress associated with studying for Step 1 to get the highest score you possibly could.”

But not all residents liked the difficulty in being able to differentiate themselves, beyond med school pedigrees, in the absence of Step 1 scores.

Meanwhile, some doctors posting comments to the Medscape report strongly disagreed with the idea that residency life is getting harder. They depict residency as a rite of passage under the best of circumstances.

“Whatever issues there may be, [today’s residents] are still making eight times what I got and, from what I’ve seen, we had a lot more independent responsibilities,” one physician commenter said.

Other doctors were more sympathetic and worried about the future price to be paid for hardships during residency. “Compensation should not be tied to the willingness to sacrifice the most beautiful years of life,” one commentator wrote.

Many resident respondents celebrated the opportunity to interview for residency programs online. Some who traveled to in-person interviews before the pandemic said they racked up as much as $10,000 in travel costs, adding to their debt loads.

But not everyone was a fan. Other residents sniped that peers can apply to more residencies and “hoard” interviews, making the competition that much harder.

Whether to Report Harassment

In its survey, Medscape also asked respondents whether they ever witnessed sexual abuse, harassment, or misconduct; and if so, what they did about it. Among those who did, many opted to take no action, fearing retaliation or retribution. “I saw a resident made out to be a ‘problem resident’ when reporting it and then ultimately fired,” one respondent recounted.

Other residents said they felt unsure about the protocol, whom to report to, or even what constituted harassment or misconduct. “I didn’t realize [an incident] was harassment until later,” one resident said. Others thought “minor” or “subtle” incidents did not warrant action; “they are typically microaggressions and appear accepted within the culture of the institution.”

Residents’ confusion heightened when the perpetrator was a patient. “I’m not sure what to do about that,” a respondent acknowledged. An emergency medicine resident added, “most of the time…it is the patients who are acting inappropriately, saying inappropriate things, etc. There is no way to file a complaint like that.”

Rewards and Challenges for Residents

Among the most rewarding parts of residency that respondents described were developing specific skills such as surgical techniques, job security, and “learning a little day by day” in the words of a first-year gastroenterology resident.

Others felt gratified by the chances to help patients and families, their teams, and to advance social justice and health equity.

But challenges abound — chiefly money struggles. A third-year psychiatry resident lamented “being financially strapped in the prime of my life from student loans and low wages.”

Stress and emotional fatigue also came up often as major challenges. “Constantly being told to do more, more presentations, more papers, more research, more studying,” a fifth-year neurosurgery resident bemoaned. “Being expected to be at the top of my game despite being sleep-deprived, depressed, and burned out,” a third-year ob/gyn resident groused.

But some physician commenters urged residents to look for long-term growth behind the challenges. “Yes, it was hard, but the experience was phenomenal, and I am glad I did it,” one doctor said.

Batya Swift Yasgur, MA, LSW is a freelance writer with a counseling practice in Teaneck, New Jersey. She is a regular contributor to numerous medical publications, including Medscape and WebMD, and is the author of several consumer-oriented health books as well as Behind the Burqa: Our Lives in Afghanistan and How We Escaped to Freedom (the memoir of two brave Afghan sisters who told her their story).