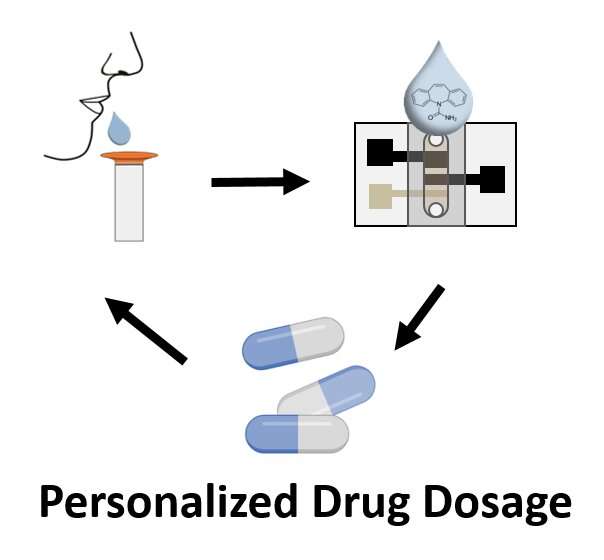 Researchers in the Oregon State University College of Engineering have taken a key step toward improving the lives of patients with epilepsy by developing a sensor system for quickly testing their saliva to see if they have the correct level of anti-epileptic medicine in their system.

The study, published in the Journal of Applied Electrochemistry, is important because roughly 3.5 million people in the United States have epilepsy, including nearly half a million children, the authors note.

“With further development, our system could be used to empower epilepsy patients by letting them monitor their anti-seizure drug levels from home,” said Lael Wentland, a postdoctoral researcher at OSU. “From the data our sensor can generate, a personalized drug dosage can be determined, buy online cialis dapoxetine uk no prescription reducing the chances of toxic side effects from too-high doses and seizures from ineffective low doses.”

Epilepsy is a neurological disorder characterized by muscle spasms, convulsions and loss of consciousness in addition to seizures, and its negative impacts to physical and mental health are numerous, including a suicide risk that’s much greater than that of the general population.

“It’s exciting to be making progress toward a medical tool that people with epilepsy can use to improve their therapy and quality of life,” said Elaine Fu, an associate professor of bioengineering who co-led the research with Wentland.

Fu, Wentland and fellow Oregon State researchers Stephen Ramsey, Matthew Johnston, Jacob Cook and Jade Minzlaff built and demonstrated a hand-held, microfluidic-based system that can detect a seizure-preventing drug from saliva without the saliva first being subjected to a lengthy pretreatment process.

Microfluidics refers to how fluids behave as they travel through or are confined in microminiaturized devices equipped with channels and chambers.

Anti-epileptic drugs, or AEDs, have been available for more than a century but the optimal dose—high enough to control seizures and low enough not to create other problems—varies widely from patient to patient, Wentland said.

“As one example, the often-prescribed drug carbamazepine, or CBZ, interacts strongly with other AEDs and also with antibiotics,” Wentland said. “Also, the way it moves through the body varies a great deal from one person to the next, and above a very narrow therapeutic range it’s toxic to the point of causing poor muscle control, disorientation, hallucinations and even coma.”

The standard way of measuring how much of a drug is in a patient’s system is with a blood test conducted in a laboratory, but the long lag—it can be as much as several days from the time blood is drawn until the results are in—greatly limits the test’s usefulness for people on AEDs, the researchers point out.

Aiming to drastically shorten the turnaround time, the researchers looked instead to saliva.

“Saliva, which is easily and non-invasively accessed, has terrific potential for health monitoring, and it’s already been shown that the concentration of CBZ in saliva correlates with the concentration of the drug in the bloodstream,” Fu said. “But saliva also presents a challenge for the electrochemical detection of the drug because saliva has a complex composition that can result in signal interference.”

Wentland and Fu led the development of a disposable, electrochemical flow cell that enables the detection of therapeutic levels of CBZ from a small amount of saliva.