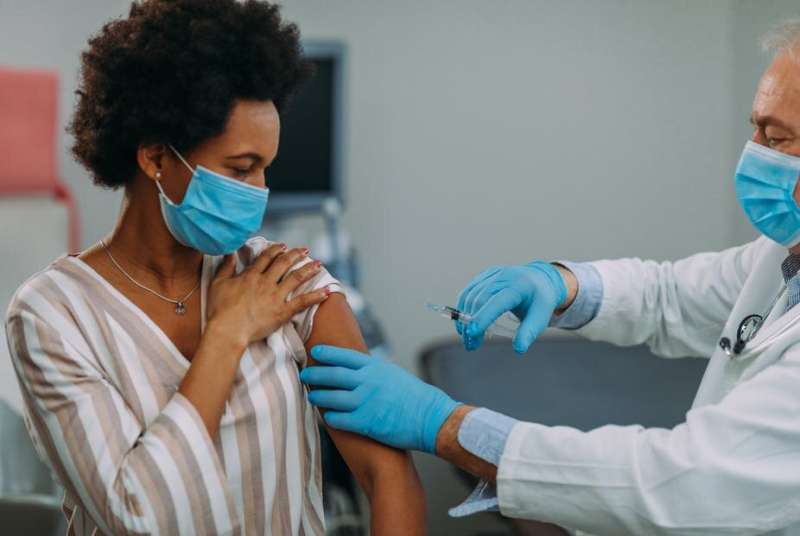 Graham was a healthy 34-year-old until he developed COVID in July 2020. Along with his wife and children, he had a fever, a cough, breathlessness, profound fatigue and he lost his sense of smell.

But instead of getting better like the rest of his family, Graham found that his breathlessness persisted. Even minor physical exertion or intellectual tasks like making shopping lists left him exhausted.

Against his better judgment, Graham returned to his job as a schoolteacher after six weeks. But he quickly crashed—essentially he became so tired he could barely get out of bed—and had to go on sick leave again.

Graham is fictitious but his story is typical of someone with long COVID—defined as COVID symptoms that are not better after four weeks (“post-acute COVID”) and especially after 12 weeks (“chronic COVID”).

Data from the U.K.’s Office for National Statistics (ONS) shows that 1.8 million people in the U.K. (2.8% of the population) self-report symptoms of long COVID. Of these, female thinning hair birth control pills 791,000 (44% of all long COVID patients) have been unwell for more than a year and 235,000 (13%) for more than two years. These groups are sometimes referred to as “long haulers.”

There is currently no known cure for long COVID, though even long haulers may improve with multidisciplinary rehabilitation. This involves physiotherapy and help with prioritizing and planning to make the most of limited energy.

Graham caught COVID before vaccines became available. When invited for his jab ten months after his initial illness, he wanted to know if it would make him better, worse or have no effect. At the time, his doctors couldn’t answer that question—but now we know more.

While evidence suggests that people who are vaccinated before they get COVID are less likely to develop long COVID than unvaccinated people, the effectiveness of vaccination on existing long COVID has been less clear.

Scientifically, the best way to test the impact of a vaccine on long COVID would be to take a few hundred unvaccinated people with long COVID, measure their illness severity (ranking each symptom on a scale of one to ten, for example), and randomly allocate half of them to receiving a COVID jab. The other half would get a placebo (a saline injection, for example). After a few months, the symptom scores would be collected again before revealing who had had which jab.

This design is known as a randomized controlled trial. Unfortunately there have been no such studies (perhaps because scientists have been busy on other aspects of this new disease), so the “gold standard” answer to Graham’s question is lacking.

At the other end of the scientific spectrum, there are anecdotes—stories of people like Graham’s neighbor whose long COVID improved after a vaccine. But one individual’s experience doesn’t speak for the population. And even if the anecdote is accurate, who is to say that the vaccine led to the improvement, as opposed to it being a coincidence? Association is not causation.

Thousands of people with long COVID have joined online communities, some of which invite their members to take part in survey studies. In one such study of around 800 people, a little over half of respondents felt improved after one jab, around one in six felt worse and the remainder reported no change in their symptoms.

But since certain kinds of people—white, educated, female, affluent, health-conscious—are more likely to join online communities (and respond to surveys) than others, these types of studies aren’t necessarily a good reflection of the population as a whole.

A new study published in the BMJ looked at more than 28,000 U.K. adults who were part of the ONS COVID-19 Infection Survey. All had tested positive for COVID and at a later date (varying in time since their infection) underwent a course of COVID vaccination.

Participants filled out symptom questionnaires before taking the COVID test, before vaccination and a few weeks after each dose. Overall, one in four people still reported some symptoms four weeks after their initial COVID infection. In one in six, symptoms were severe enough to limit their activities.

On average, the first vaccine was associated with a 13% reduction in the chances that a person still had long COVID symptoms (which wasn’t sustained after 12 weeks) and the second with a further 9% reduction (which was sustained). But this overall figure masks wide variation between people. In the survey mentioned above, we know that while some people improved, a few got worse and some stayed the same.

In the BMJ study, improvement was greater the sooner the jab was given after COVID infection. There were small differences between different vaccines which may have been due to chance.

So what’s the bottom line? As we argue in this commentary, people like Graham with long COVID are more likely to improve (or stay the same) than deteriorate if they receive a vaccination. Although, as some patients have reported deterioration of long COVID symptoms after vaccination, more research into possible reasons for this will be important.