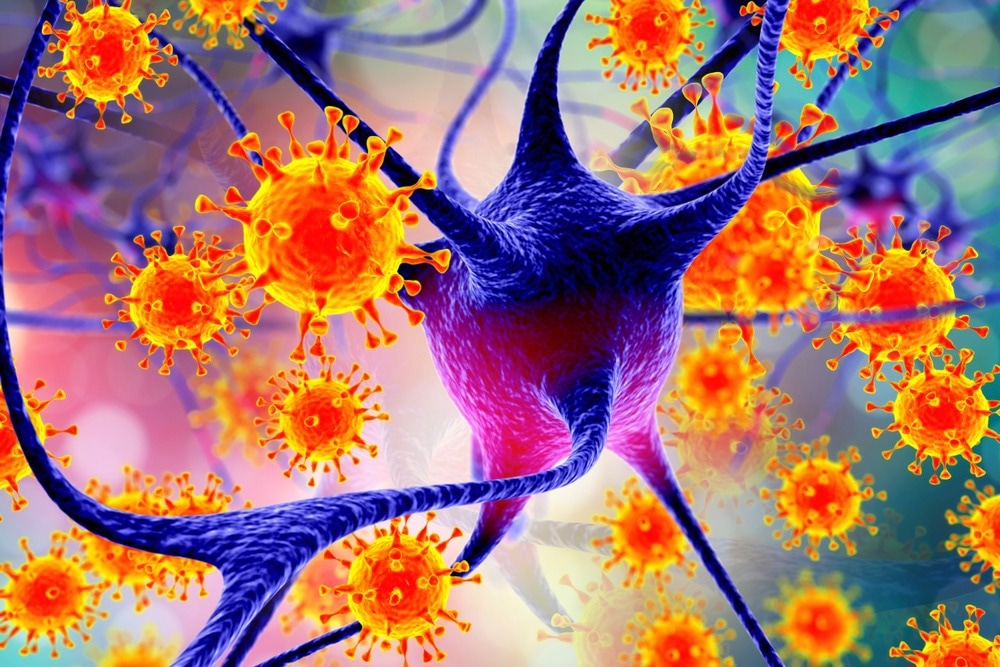 MS is an immune-mediated condition that results in chronic inflammatory demyelination of the brain and spinal cord, possibly triggered by a viral infection. Comparatively, EBV is a human herpes virus that persists for life inside a host, with its latent form found within B lymphocytes.

Most EBV infections do not result in the development of MS; in fact, the etiology of MS is unknown. However, some pathological studies have shown the presence of EBV in MS demyelinated lesions and elevated serum antibodies against EBV nuclear antigens (EBNAs) in MS patients.

Nevertheless, it remains challenging to discern a direct cause-effect association between EBV and MS. Furthermore, cheap sinemet cr without prescription there remains a lack of evidence of causality, which implies ascertaining that some individuals who developed MS following EBV infection would not have developed MS if they had not been infected with EBV.

While EBV is ubiquitous and affects over 95% of the population, MS is a relatively rare disease. This has impeded longitudinal investigations in the past, as it was not feasible to find a cohort of EBV-negative individuals, some of whom will become EBV-positive during the follow-up and some who will not.

The United States military is a racially diverse population of over 10 million individuals. In the current study, the authors identified MS cases among active-duty U.S. military personnel between 1993 and 2013. At the beginning of their service, these individuals provided serum samples that remained in the Department of Defense Serum Repository (DoDSR).

DoDSR samples of all U.S. military personnel were subsequently screened to determine EBV status at first sampling, as well as the association between EBV infection and MS onset during their service tenure. A total of three serum samples were obtained before the date of MS onset for each MS case.

Cytomegalovirus (CMV) was used as a negative control to assess the possible correlation between environmental, behavioral, and other characteristics with susceptibility to both EBV infection and MS.

The VirScan assay was used to search for the antivirome antibody response in 30 randomly selected MS cases and 30 matched controls. Serum samples collected zero to three years before and zero to two years after MS onset were used for this assay.

The first serum samples of about 5.3% of U.S. military personnel were EBV-negative, of which 955 were subsequently diagnosed with MS during their service tenure. A total of 1,566 controls were available for 801 MS cases to assess EBV infection status.

Most study participants were over 20 years of age at the time of their first blood collection. On average, most participants who developed MS did so 10 years following the first sample collection.

Of the 801 MS cases, only one MS case occurred in an EBV-negative individual. On average, these samples were collected one year before MS onset.

The hazard ratio (HR) for MS in EBV-positive versus EBV-negative was 26.5. At baseline, 34 EBV-negative MS cases became infected with EBV during the follow-up period; however, all 35 seroconverted before MS onset.

The HR for MS comparing EBV seroconversion as compared to long-term EBV seronegativity was 32.4. Furthermore, 97% of individuals who developed MS during follow-up had a high seroconversion rate.

Antibody levels against CMV were also assessed. At baseline, seroconversion for CMV occurred at a similar rate in those who developed MS and those who did not. The lower risk of MS in CMV-positive individuals indicates that the host immune response to CMV weakened the adverse effects of EBV.

Except for EBV, the antibody response to about 110,000 viral peptides of VirScan was similar in MS cases and controls at both time points. This finding indicates that immune dysregulation during the MS preclinical phase was not associated with general susceptibility to viral infections.

Taken together, the specificity of the association between EBV and MS was evident, thus nullifying the role of another virus in MS etiology.

The authors presented evidence to support the hypothesis that EBV infection is a cause, rather than a consequence, of MS. One key finding supporting this conclusion, is that EBV seroconversion occurred well before the elevation of sNfL levels, which is an early marker of preclinical MS.

Only one MS case was identified in an EBV-negative individual. It is likely that this individual failed to seroconvert in response to EBV infection or developed EBV infection after blood sample collection. Another explanation could be etiological diversity, where another virus causes a clinically indistinguishable form of a disease.

The authors recommend direct targeting of EBV through anti-cluster of differentiation 20 (CD20)-based therapies to combat the risk of MS. It would also be beneficial to add MS to the list of diseases an EBV vaccine could target to accelerate ongoing research in this area.

Neha is a digital marketing professional based in Gurugram, India. She has a Master’s degree from the University of Rajasthan with a specialization in Biotechnology in 2008. She has experience in pre-clinical research as part of her research project in The Department of Toxicology at the prestigious Central Drug Research Institute (CDRI), Lucknow, India. She also holds a certification in C++ programming.