A father-of-one has defied the odds by walking again after a horror rugby tackle left him paralysed from the chest down.

Ashley Mooney, 31, was left quadriplegic after the freak accident during a match for Redditch Rugby Club in Worcestershire last October.

He was rushed to hospital with devastating spinal injuries and was told he only had a 1 per cent chance of walking again, he claimed.

His first breakthrough came within just three weeks of the accident when he realised he could wiggle his toes while at Birmingham’s Queen Elizabeth Hospital.

By December, around the time of his 30th birthday, he was able to stand for the first time after being transferred to a specialist spinal unit in Oswestry, Shropshire.

His father died in January, but despite the loss, he used it to spur him on to carry his coffin at the funeral months later.

And after months of rehabilitation, hard work and willpower, Mr Mooney astounded doctors by taking his first steps unaided in April.

Despite fears his ‘active life was over’ when he became injured, he was back behind the wheel driving in May.

Now, Mr Mooney says he is ready to return to work as a firefighter after proving his doctors wrong. 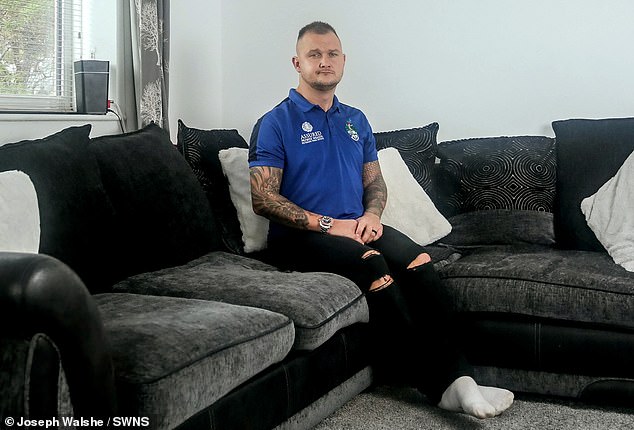 Ashley Mooney, 31, from Redditch, Worcestershire, has defied the odds by walking again after a horror rugby tackle left him paralysed from the chest down 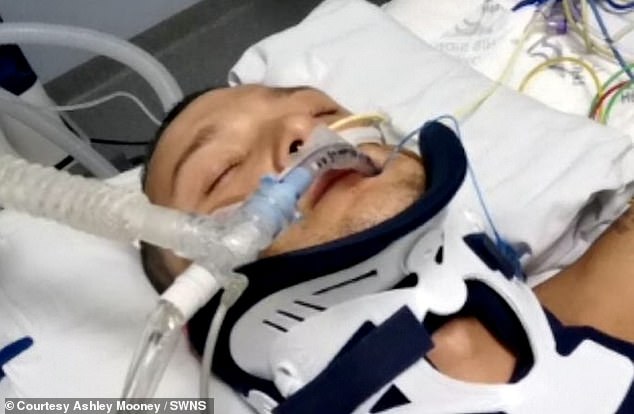 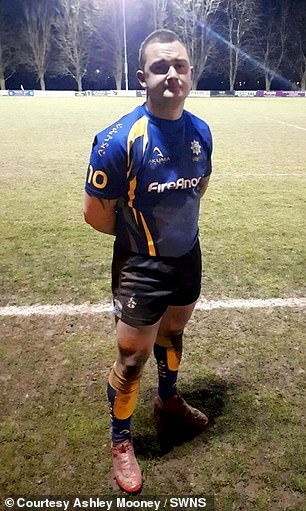 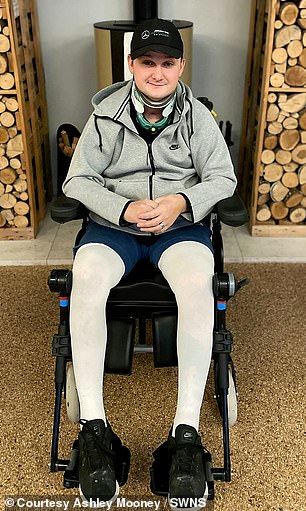 Mr Mooney was left quadriplegic after the accident during a match for Redditch Rugby Club (pictured in his kit, left) in Worcestershire on October 2 last year

The cervical spinal cord is the uppermost region of the vertebrae and is in the neck.

The higher the injury to the spine, the more severe the damage and the more likely it will be life threatening.

A patient may not be able to breathe on his or her own, cough, or control bowel or bladder movements.

Ability to speak is sometimes impaired or reduced.

When all four limbs are affected, this is called tetraplegia or quadriplegia.

It requires complete assistance with activities of daily living, such as eating, dressing, bathing, and getting in or out of bed.

The patient may be able to use powered wheelchairs with special controls to move around on their own, but will not be able to drive a car on their own.

An ‘incomplete’ spinal cord injury means the ability of the spinal cord to convey messages to or from the brain is not completely lost.

Although a quadriplegic cannot move their limbs, ‘incomplete’ often means they still have some sensation in their arms and legs, even if it is faint.

Some quadriplegics have been able to regain some function once swelling goes down or if they have surgery to remove something pressing on their spinal cord.

‘I thought my active life was over. But when I first started to get that movement within after a couple of weeks that’s when the flip switched.

‘Even when I was moving my legs a consultant said I’d never walk — but I just said I’d prove him wrong.’

Mr Mooney suffered the severe injury during a ruck clear out while playing against Cannock Rugby Club which left his spinal column ‘forced into’ his spinal cord.

He had crushed both the C5 and C6 vertebrae nerves at the base of his neck, leaving him with an injury most people never recovery from.

Around 2,500 people are thought to suffer spinal injuries every year in Britain, according to estimates by the Spinal Injuries Association.

The cervical spinal cord is in the neck and is made up of seven sections — C1 at the top to C7 at the bottom.

The higher the injury, the more severe the damage and the more likely it will be life threatening.

C5 injuries, like that suffered by Mr Mooney, make up 15 per cent of all spinal cord injuries.

Mr Mooney’s was incomplete, allowing him to wiggle his toes, but this still leads to paralysis in most cases.

Injuries to the C5 spine also come with a range of other symptoms like loss of muscle, spasms, difficult breathing and inability to control the bladder and bowels.

He said: ‘It was just a normal Saturday and it was traditional British weather, all rain. There was an injury early on in the game and that set the mood.

‘Around 10 to 15 minutes later I got injured. It was during a clear out. I’m not sure how it happened exactly but obviously contact was made with my head.

‘I was carted off an hour later over the rugby pitch to an ambulance which took me off to the QE in Birmingham.

‘They did an X-ray but already I sort of understood this wasn’t going to be a quick patch up and back out tomorrow.

‘They told me I had crushed the C5 and C6 of my spinal column and that it had forced itself into my spinal cord.

‘I had my 30th birthday in the intensive care unit and I could feel nothing from the chest down.’ 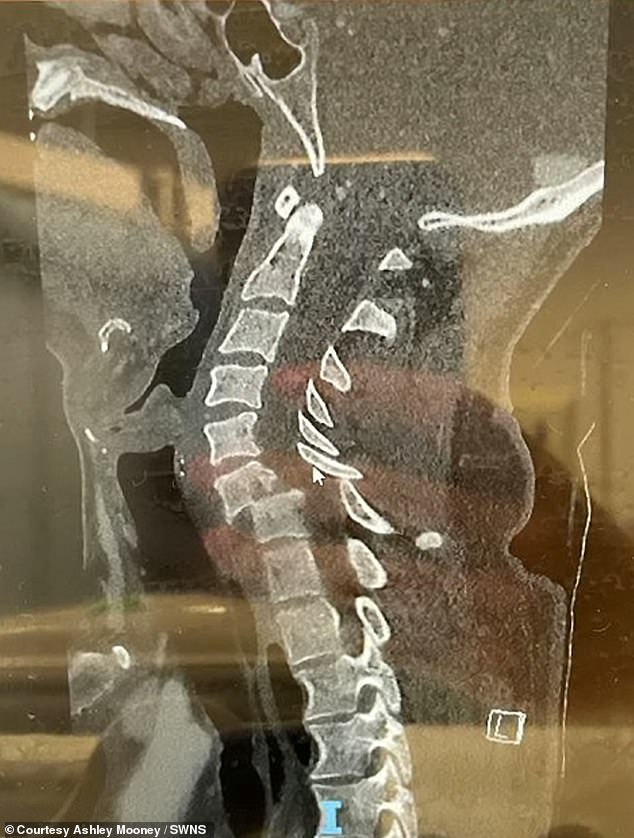 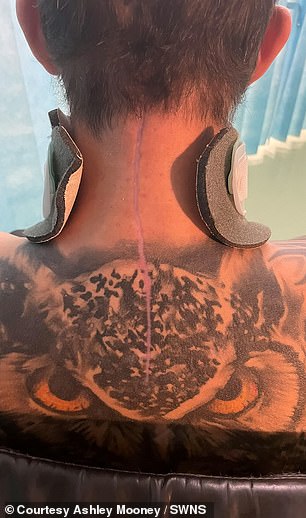 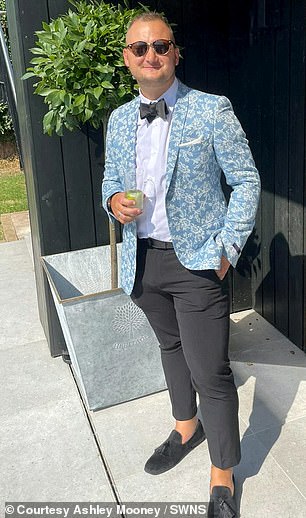 He had crushed both the C5 and C6 vertebrae nerves at the base of his neck, leaving him with an injury most people never recovery from. Left: Mr Mooney’s scar after the injury. Right: Mr Mooney after regaining the use of his legs

He said: ‘It just went from there. By December 4, I could lift my arms and grip. I started doing my own exercises in my room, I had a 1kg dumbbell which I used.

‘It was December 21 when I first actually stood. The physio said I had good leg strength. Playing rugby my legs were always my best asset.

‘They were able to get me to stand, not completely on my own but I was standing again and knew I had to then literally take the next steps.’

Mr Mooney was forced to return home earlier than planned on January 17 after his father tragically died.

But he used the tragedy as inspiration, becoming determined to carry his father’s coffin and ditching his wheelchair for a zimmer frame.

Afterwards, he spent weeks at a time at rehabilitation units thanks to help from the Injured Players Foundation and The Firefighters Charity.

He said: ‘I was adamant that I could carry dad. I carried him along with my brothers and uncle.

‘Then the Injured Players Foundation helped me — they even paid the wife’s fuel to see me and helped with the house bills for six months at the start.

‘I went to their recovery centre and spent three weeks there and after that I didn’t need my zimmer anymore.

‘It was five hours a day of rehab and it was really intense, it’s what you need.’

He started driving on May 9 after going to an assessment day to assess how he was operating the car.

Mr Mooney added: ‘In January I was still in a wheelchair, I remember feeling angry, but by May I was driving.

‘My hands still don’t fully work and I have a long list of medication. I also walk with a limp so I won’t ever be back to 100 per cent physically.

‘I wouldn’t return to playing rugby though — my playing days are over. It is difficult to take why I have recovered and lots of people who have had the same injury don’t.

‘I suppose I have defied the odds.’