There’s really not a whole lot left to be said about Chivalry 2 at this point that I haven’t already said during the build-up to its release. So, let’s just get straight to the point: Chivalry 2 is great. From its overly gruesome and violent combat to its cross-play compatibility, Torn Banner’s sequel takes what made the first game so special and makes it even better.

My pre-release experience took place on the PC version of the game. For this review, however, I played the PS5 version along with my teenage nephew who immediately fell in love with the game, even though he has never played the original game that was released in 2012. He is particularly taken with Chivalry 2 due to its high difficulty factor, and ultimately, the satisfaction that comes from stringing together a line of over-the-top kills before each inevitable death, relating it to his favorite titles from the Soulsbourne lineup. Although I’m not as big of a fan of Dark Souls or Bloodbourne as he is, I can’t help but agree that Chivalry 2 does well to make each combat encounter distinctly immersive and satisfying. 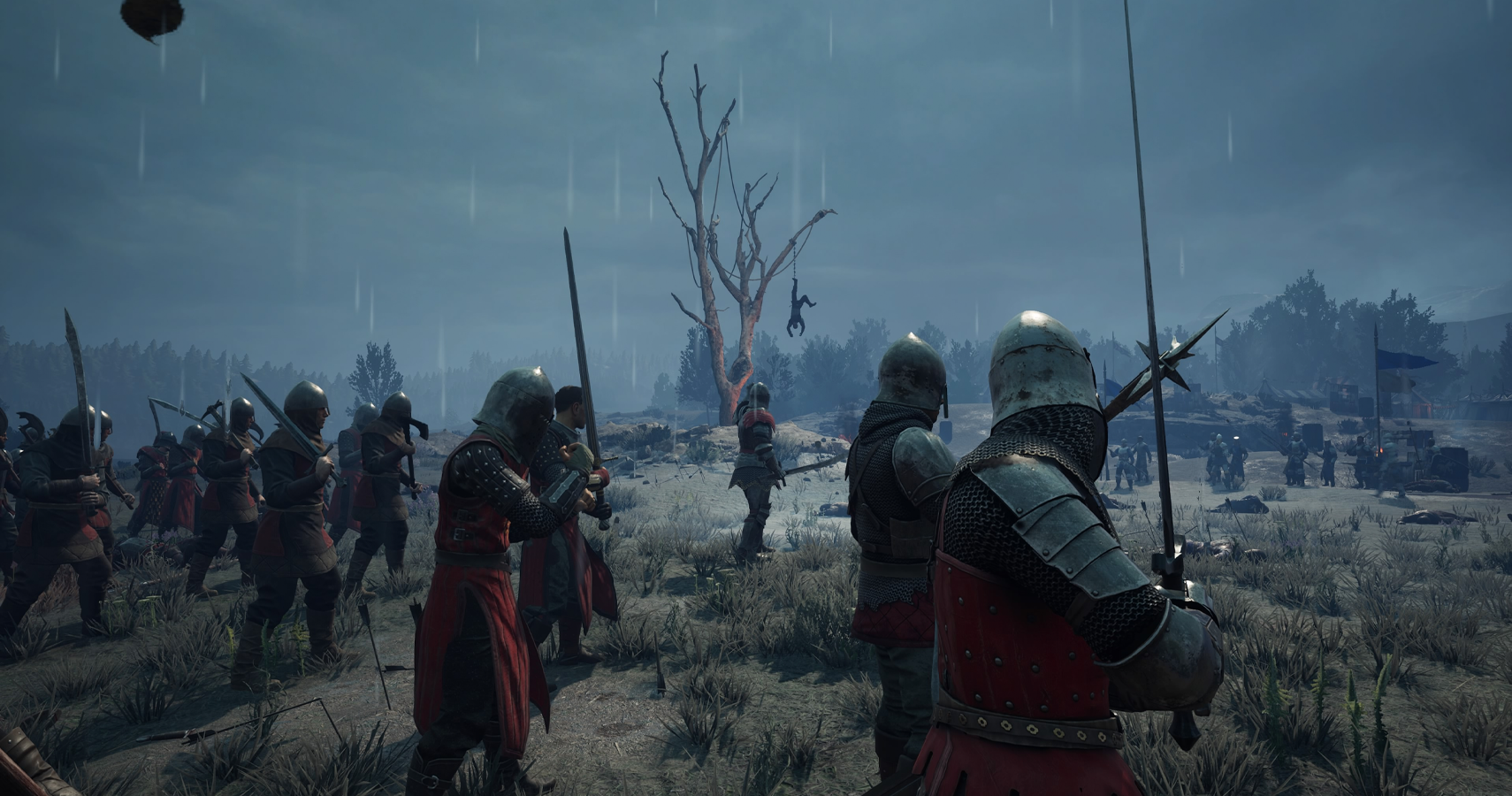 Combat is elevated to the extreme in Chivalry 2. Whereas the original game only allowed for up to 32-player battles, Chivalry 2 features 64-player and 40-player matches, all of which are possibly the most chaotic skirmishes I think I’ve ever experienced. Game modes include everything from free-for-all, attack and defend, and escort (or defend against) the payload – or, as my nephew so aptly noted, “It’s basically Overwatch meets Dark Souls.”

The various game modes and objectives are pretty self-explanatory, but let’s be real: You’re here for the ridiculously bloody swordplay. 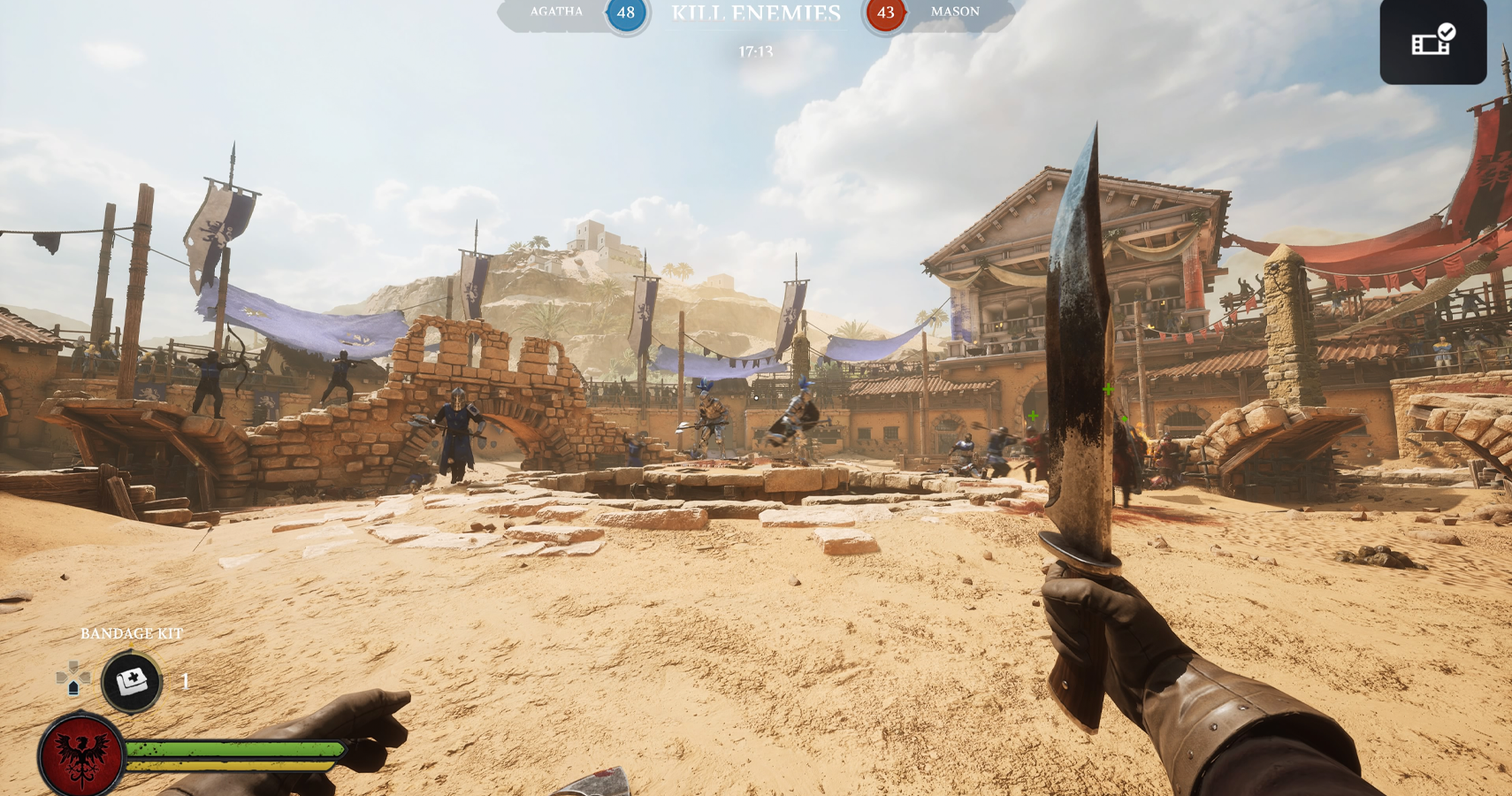 Chivalry 2 features over 60 weapons that are split across four primary class types, each containing a total of 12 different subclasses. Weapons range in everything from single-handed longswords and battle axes to heavy-handed greatswords and warhammers. Of course, each weapon comes with its own unique characteristics and strategies for taking on the enemy. While smaller weapons may be faster, they don’t deal the damage of a heavier and slower weapon. Chivlary 2 does well to build upon the first game with its hand-to-hand combat, whether you’re blocking or dodging out of the way of an oncoming attack, feigning an attack to keep your enemy guessing where you’ll actually be swinging from, or meleeing with a quick kick to the gut to buy yourself some time to re-establish your footing. You’re even able to huck your weapon at an enemy from afar for a ranged attack. Of course, this means you’ll be left relatively defenseless against enemy attacks until you’re able to pick up another weapon. Luckily, Chivalry 2 has you covered in that regard, and then some.

“Sam! I got a fish,” I hear my nephew excitedly exclaim as we make our final stand against the attacking Masons. Yep, he had managed to pick up a fish from somewhere on the map and proceeded to slap someone in the face right before being decapitated by their sword. There is no shortage of weapons – or things to be picked up and used as a weapon – scattered throughout the map. From fish to rocks to branding irons, almost anything not nailed down can be used as a blunt instrument or throwable, in addition to the major machine weapons that are available such as trebuchets and ballista bolts. You can even pick up and use the limbs and severed heads that are littering on the ground, which is about as gross as it is humorous – humor being another major component of the game with its role-playing mechanic that features hilarious voice lines that almost always get a chuckle out of me. 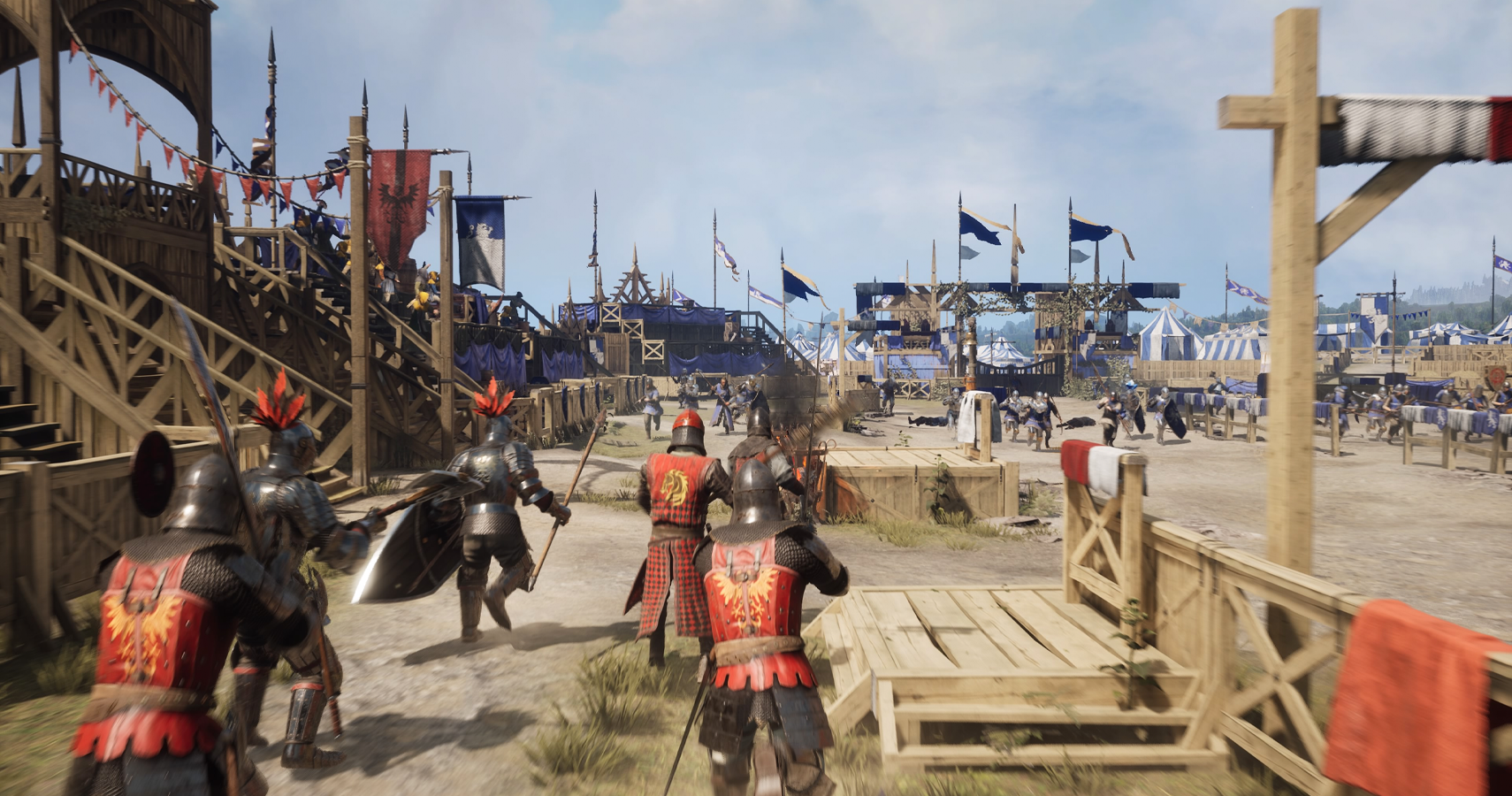 As great of a game as Chivalry 2 is, there is certainly still room for improvement (we’ll just pretend that the Day One server issues never happened). Perhaps the most frustrating issue occurs during the stage-based battles. I often encounter a “Deserting Match” notification, even though I am clearly in the middle of the battlefield fighting with other players. This has often resulted in being taken out of the immersive experience and ultimately killed as I tried to figure out where I needed to go to get rid of the error. There have also been a handful of times when the game froze while navigating the menu screen, forcing me to close down and restart the application. Luckily, this issue has never occurred during an online match.

Finally, there is no 1-v-1 duel mode on the PS5… yet. This was a staple in the original game, and one that I would love to see again in Chivalry 2. Hopefully, that mode will be added at some point.

In terms of the gameplay experience on PS5, it feels pretty solid. Having only previously played both Chivalry games on PC, there was a bit of a learning curve to get the feel for controller-based gameplay. That said, my nephew had no trouble at all getting up to speed as a brand new player to the franchise.

Chivalry 2 doesn’t necessarily feel like a totally new game, but it brings a lot of little changes that make it feel like a fresh experience. While there are still a few kinks to be worked out, Chivalry 2 brings everything that I loved from the first game and takes it to the next level in an incredibly fun and addicting experience.

A PS5 copy of Chivalry 2 was provided to TheGamer for this review. Chivalry 2 is now available on PC, PS4, PS5, Xbox One, and Xbox Series X|S.