I’m sitting far enough back that I’m out of the crowd. Watching. Watching the line of people and vehicles as they wait at the border. Watching the Tower Group guards as they give the go-ahead to some to pass through the gate, forcing others – often physically – out of line and sending them wearily back to the bordertown; the badlands. They were probably mutants. Tower guards hate mutants. On the other side of the gate lies Cincinnati, now one of the only places in North America that’s hospitable enough to act as a major city – at least, as far as I’m aware right now. I’ve seen planes flying in and out of the city. There has to be somewhere else, right?

I continue to sit back and watch until an announcement comes over the gate’s loudspeaker that rudely informs everyone that the border is closed for the night and to come back tomorrow. Another typical day as I wait for my chance to get through the gate myself – or at least gain enough insight and information to find some other way to get on the other side of the wall. 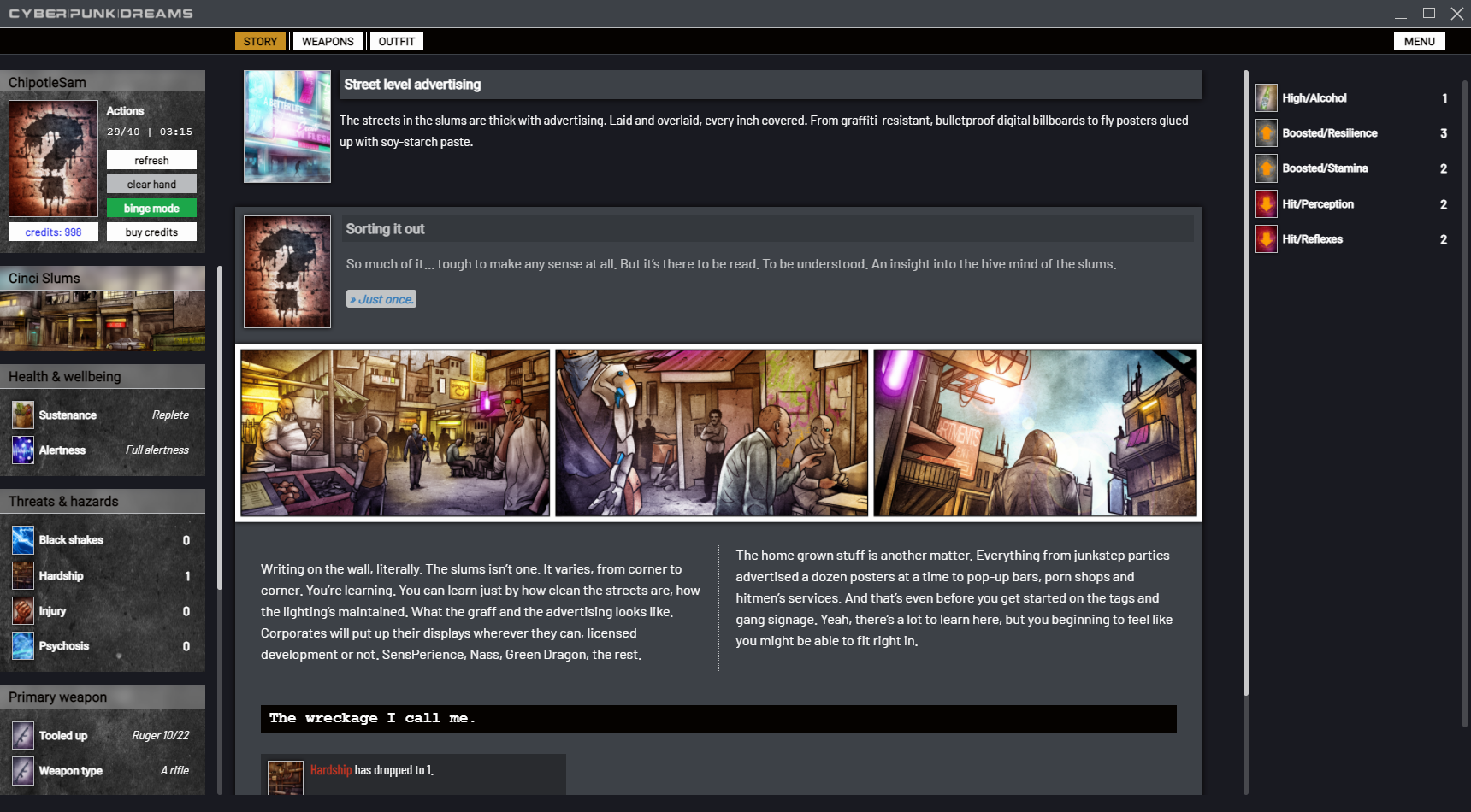 Then, out of nowhere, a truck explodes. Bullets begin to whiz past me. On one side of me, a group of bordertown rebels are attacking the guards, not caring if any innocent civilians get caught between their crosshairs. On the other side, the Tower guards at the gate respond by unleashing hell with their automatic rifles and tower turrets. I’m caught in the crossfire and I need to move. As I start, though, I hear the screams of the child that’s trapped in the cabin of the exploded truck. She’s somehow still alive – her mother, the driver of the truck, not so lucky. I could easily start running the opposite direction, away from the chaos. Instead, I take a chance and sprint towards the truck in an attempt to save the child while staying alive myself – a dice roll with odds that aren’t exactly in my favor.

This is just one of the countless scenarios that you may find yourself in while playing Cyberpunkdreams – a free-to-play text-based role-playing adventure game from indie developer Late Night Games. Set in the 2090s, Cyberpunkdreams takes advantage of the current popularity of the cyberpunk genre, although the game has been in development since 2013. Each decision you make impacts your story within the world, and is uncompromising in its rewards and punishment system. I’m not someone who is generally a fan of text-based adventures, but Cyberpunkdreams is something special. It’s the most immersive experience I’ve ever had in a cyberpunk setting. The game has its hooks in me and won’t let go… not that I mind at this point. 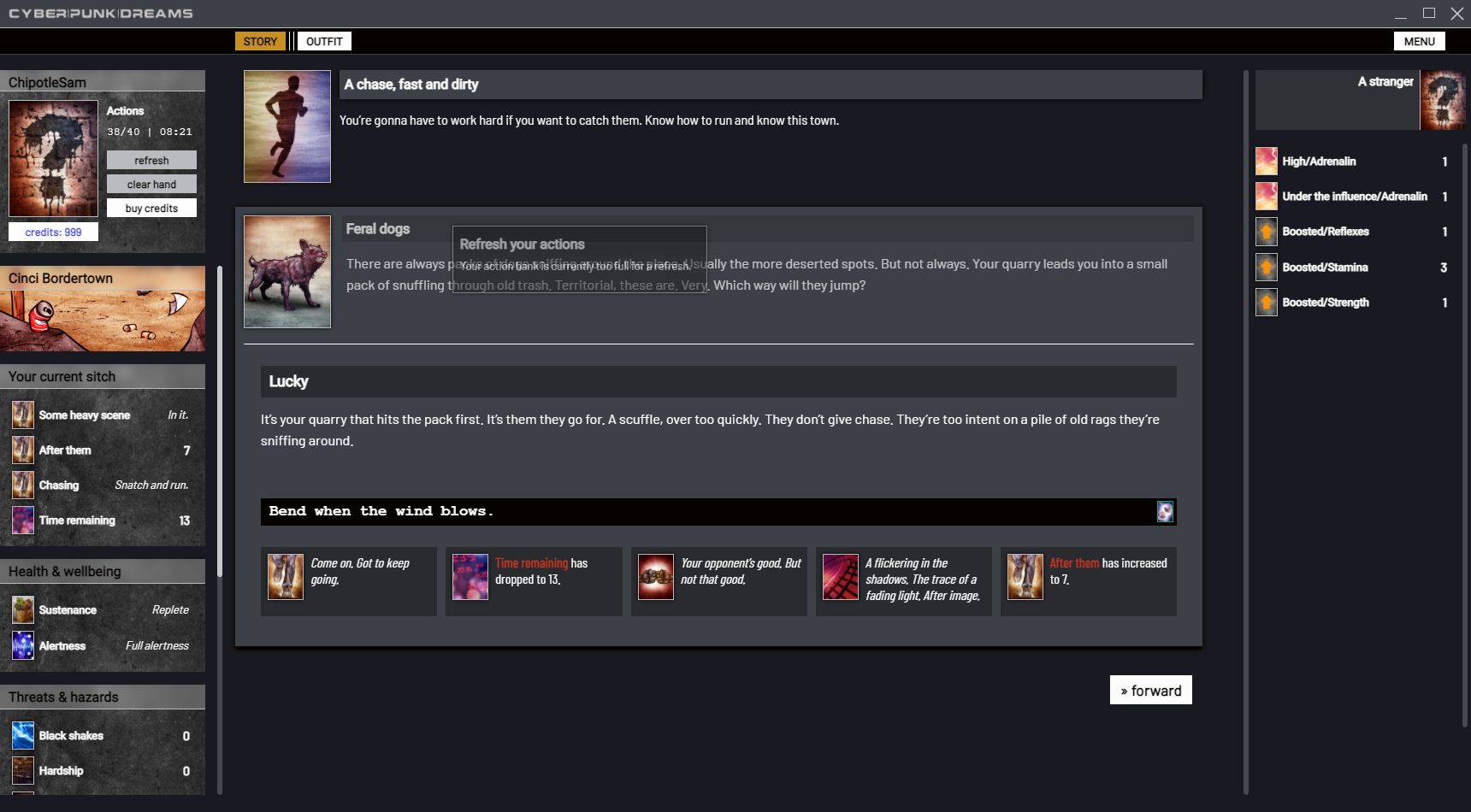 Upon entering the game for the first time, there’s a bit of a learning curve. I wouldn’t go so far as to say it’s super steep, but the interface can be a little overwhelming until you spend some time with it. There’s also often a vagueness in the narrative that takes some getting used to. However, I think this adds to the game’s immersive experience. You’re essentially a newcomer to the bordertown, tasked with somehow getting through the gate into Cincinnati. You’re not really given any direction and are left to figure things out on your own. This “picking yourself up by the bootstraps” experience forces you to be uncomfortable and confused at first, but eventually pays off as you learn the nuances of the game.

Gameplay is controlled through decks of cards that are drawn. Each draw provides you with three new cards that kick off certain actions. Some repeat often, like taking a walk and getting some fresh air. Others are story-driven based on the storylines you’ve encountered. Maybe you’re looking for someone specific. A related card might appear that will lead you down the path to finding them. Most cards come with different options/decisions, each of which has a percentage of success assigned to it. Cyberpunkdreams is very much high-risk, high-reward. If you select an option with a low percentage of success, you’ll either be handsomely rewarded or strictly punished. 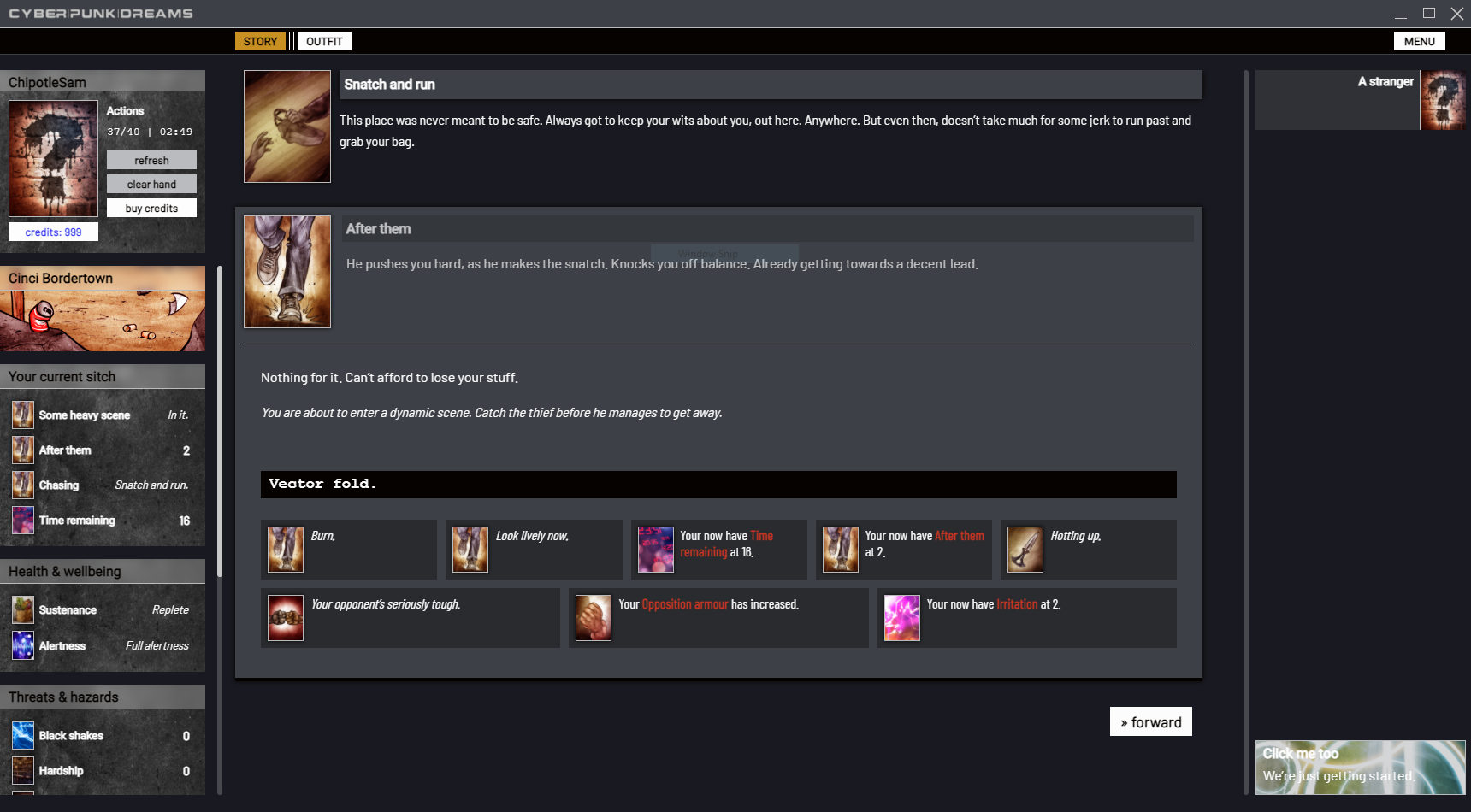 And you will be punished. Whether you randomly get mugged in a back alley or end up in a long and slow death loop that drains you of your money, health, and resources, Cyberpunkdreams is not an easy game. You’re going to die, but you’ll begin each subsequent playthrough with just a little bit more of an advantage. After weeks of playing, I’ve somehow managed to keep my second character alive and thriving. I’m sure I’ll run into a wall at some point, but apparently, I’ve been making the right decisions… or, the more likely reason, have been incredibly lucky.

Cyberpunkdreams is free-to-play, but there is an optional in-game transactional component. Everything you do in the game requires an Action. You have 40 Actions available to you, and gain one new Action every ten minutes. Obviously, the faster and longer you play, the quicker your Actions will get used up. Once you reach zero, you’ll need to wait for your Actions to build back up, or you can buy Credits using real-world money to expedite the process. Credits can also be used to buy locked content, should you come across it while playing. Credits are definitely optional, though. I was provided 1,000 Credits for review purposes, but in my weeks of playing, I’ve only used 170 Credits. I really only used them during my longer play sessions that lasted upwards of two to four hours. I actually like the Actions system, since when I run out of them, I take that as my indicator to pull myself away from the game’s cyberpunk world and re-enter real life. There’s no question that I could play Cyberpunkdreams for hours on end, so that “forced” break is appreciated.

You don’t need to be a fan of text-based adventures to enjoy Cyberpunkdreams. For fans of the cyberpunk genre, this is a game that you absolutely need to play. While chance and luck play a large part, the experience is exactly what you make of it. You’re more or less in charge of what happens to your character based on the decisions that you make. Even in my weeks-worth of playtime, I’ve barely even scratched the surface. There’s so much lore in this game. There’s even an e-book for those interested in diving into the Cyberpunkdreams world even more. More content is planned post-release, and with a dedicated community of players, Cyberpunkdreams is one game that you need to check out.