I hear you, I get it – Dead by Daylight isn’t adding Lady Dimitrescu as its next killer, and that’s a tragedy for video games. As a fellow tall lady, I, too, wanted to be chased by the giant woman in heels, but it’s not happening. I’ve made my peace with it, and honestly, the more I think about it, Dead by Daylight sourcing some of the classics is a much better choice. I’ve poured a few hundred hours into the asymmetrical horror game, and after looking at early footage of the collaboration, I think Behavior and Capcom made the best choice in adding Resi fan favorites like Nemesis, Leon, and Jill. Sorry, Resident Evil 7 and 8 fans.

Look, first and foremost, let’s settle the debate around what everyone thinks the partnership should have been. These collaborations don’t happen overnight. The team at Behavior didn’t wake up yesterday, throw together plans for Nemesis, and completely ignore the wild thirst posting over Lady Dimitrescu. If you’ve even paid a bit of attention to the studio on its social channels, you’ll realize they’re a bunch who are always down for a bit of fun and jokes. Regardless, that’s beside the point. My gut tells me the timing just didn’t work out to chase Lady D’s viral sensation – and that’s okay. Anyway, I have a hard time imagining her scaled down to fit into the game, and thankfully we’ve been spared adding Ethan and his weird hands into the game.

And I get it, Nemesis isn’t really known for his small stature, but I don’t think that’s what makes him so damn scary, and he’s still shorter than Lady D. It’s the terrifying thump thump thump of his steps, and the barreling through walls and obstacles after poor Jill. My memories of Nemesis involve him busting through walls and sending me into a panic. I haven’t gotten a chance to play him in Dead by Daylight’s PBT, but the idea of him punching through pallets and boarded up doors triggers my fight or flight more than any other killer. As far as creepy Resident Evil villains go, this dude is my worst nightmare. Also, cute idea giving him the ability to just smash breakable walls in the game; the Behavior team was paying attention. 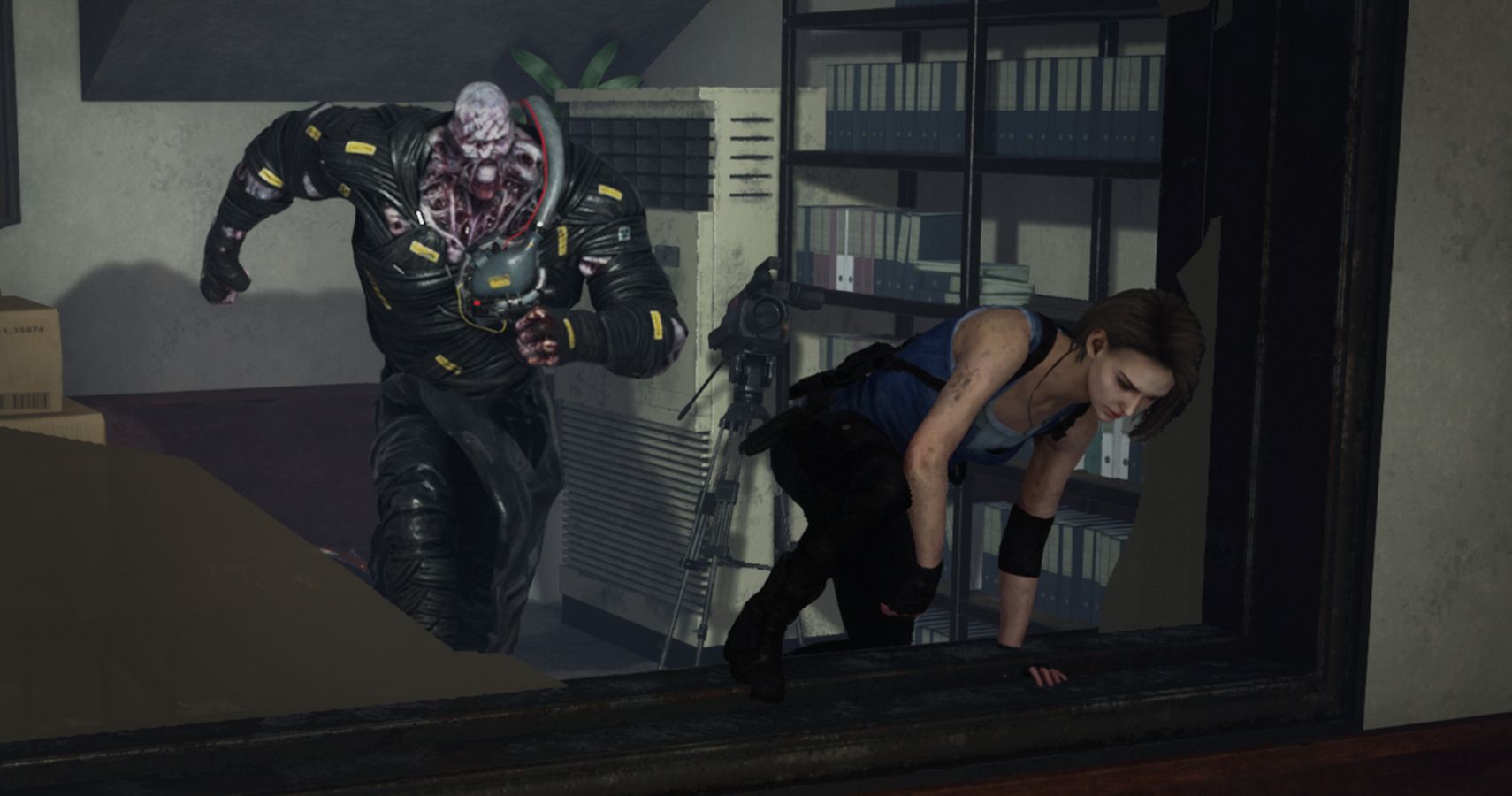 Then there’s Leon and Jill, and that’s where my biggest sigh of relief hit as the details on the chapter were revealed. Despite having an iconic cast from six other mainline entries and spinoffs prior, there was a little piece of me that kept thinking, “oh god, what if they put faceless Ethan in there for more Village promotion.” I’m a little sad my darling Claire is nowhere to be found, but Jill and Leon were the perfect choices. And again, you can tell the team over at Behavior and Capcom made sure fans would delight in their perks.

As a casual Resident Evil fan, the fourth game has always been my favorite – and I don’t think it’s particularly controversial that we all mostly agree it’s among the best. Leon seems like the least controversial pick among the crew, being from some of the most beloved entries. As a newbie to Raccoon City PD in Resident Evil 2, there’s something quite charming about the Behavior team leaning into that and giving him a few perks based on his scrappy personality and tenacity. Sure, we could’ve also gone with Chris, but in all honesty, as much as I love him and his weirdly large arms in 5, I’ve always found Leon to have the better characterization. I’m hard-pressed to name much I remember about Chris that feels as iconic – weird arms aside. 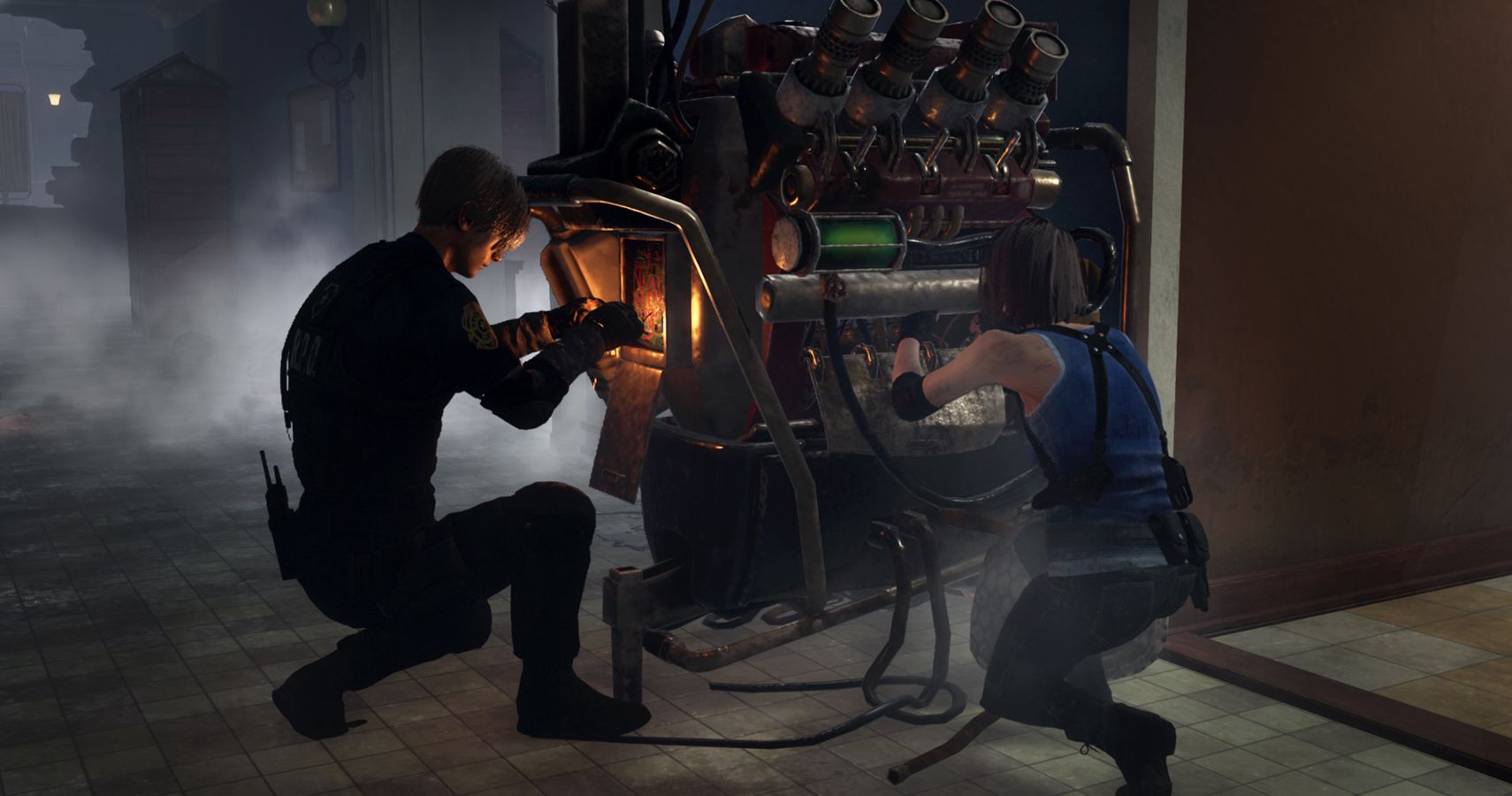 As for Jill, I know she’s the better pick, no matter how much I do love Claire. Like Leon, her perks nail her cleverness and resilience in the same way she’s characterized in the series. Counterforce and Resurgence fit right in if you think about how she’s portrayed in Resident Evil 3. Counterforce makes her cleanse Totems faster, which I reckon makes sense for someone known as the master of unlocking, so she’ll be easily sabotaging any annoying hex perks killers run. Resurgence just speaks to her scrappy personality; I’m not sure how many times I saw her go flying from Nemesis in Resident Evil 3, but she did always get right back up.

The trio makes all the sense in the world, even if they aren’t your oddly specific favorites. Up until this point, I think they’re arguably some of the most recognizable to even the most casual of fans, like myself, and that’s important. Would I have preferred Mr. X over Nemesis? Absolutely. Would I ideally just have Claire and thirty outfits for her over Leon and Jill? Yep. But outside of Lady D, I think these are some of the most well recognized, thoughtful characters in Resident Evil. In a cast full of greats, I don’t think they could have really fumbled, but I do believe that Dead By Daylight’s Resident Evil chapter nails a lot about what makes this trio, and series, so special.