It’s been more than seven years since I played and reviewed Deadly Premonition: The Director’s Cut. Here in 2020, I’m certain of only one thing: This franchise is infinitely weirder than I remember. I should explain.

I’ve been playing Deadly Premonition 2: A Blessing in Disguise on Nintendo Switch for what feels like an hour when the screen fades out, and blood-red leaves flit across my TV screen, lazily backflipping against an infinite black void. A few seconds later, subtitles appear as someone begins to speak.

“Zach?” FBI Special Agent Francis York Morgan asks. He’s our hero, but you can just call him York. Everybody does.

“Zach?” York asks again, in voice and in text.

For the first time — and for sure not the last — I wonder if maybe I’m Zach. Is York talking to me? I don’t know. This is the first conversation between the two of them (us?) that I’ve heard. I’m confused, is what I’m saying.

I don’t know if I’m participating in the joke, or if I’m the butt of it. I see things in this game that are just about impossible to describe, and if you’re willing to sit through a lot of nearly unendurable nothingness to get to those moments of purposeful chaos, you may have a great time.

Deadly Premonition 2: A Blessing in Disguise is a product of Hidetaka “Swery” Suehiro’s mind, and Swery makes weird, unique games. Oddities. Deadly Premonition 2 is both a sequel and a prequel to the original game because … well, because Swery.

Perhaps the most famous scene from the original Deadly Premonition involves a character ordering a “sinner’s” sandwich. What’s a “sinner’s” sandwich, you ask? Why, turkey, strawberry jam, and cereal, of course! Why would anyone invent something so disgusting? To atone for past sins — the culinary equivalent of a hair shirt. What sense does that make? None. But if you squint at it really hard, in a dim room, you can maybe glimpse the outlines of something bigger, something that’s internally consistent, except the rules will never be explained. The shape of it might make sense if we could zoom out far enough to see the whole thing from space, maybe, but we’re all stuck at street level, and it’s a mess down here.

That tone continues through the sequel. My first hours with the game are just shy of excruciating, in fact. Everyone seems to be speaking nonsense, or in some kind of code, and I have no idea what’s happening while everyone drones on, and my FBI work just won’t start.

The scene with the red leaves is actually an interstitial moment between the sequel and prequel sections of the game, and I have a lot more agency on the other side of it. Well, eventually.

When I can finally explore the world and play detective, I’m mostly following directions and clicking on diamond-shaped clues, which prompts the game to solve mysteries about a murdered young woman for me. It’s more of a visual novel than an action or adventure game, and even when it does become an action game, it’s limited to dungeons filled with a single enemy type, at least in the first chapter. But all the game’s action is rote, and none of it inspires enthusiasm.

I have plenty of time to think about what I’m seeing and doing, in fact, which is good in a game where the sense of place and imagery is so important. The game doesn’t play itself, but I’m often a passenger about to be shown some very, very weird shit.

There are, as far as I can tell, two possibilities: Either Deadly Premonition 2 is a disaster of a game from a team that can’t credibly develop anything — which we know at this point can’t be true, unless this is gaming’s first case of outside art going mainstream — or it’s an elaborate ruse designed to drive me mad.

The art style is ugly — the game looks like a muddier, blurrier Dreamcast version of Crazy Taxi — but the title sequence, which is an homage to True Detective, is beautiful, and it feels like maybe that’s where the team spent all of its budget. That intro also tells me next to nothing about what’s about to happen, other than to get ready to lean in to the inscrutable world of this very particular game.

Deadly Premonition 2 struggles to reach double-digit frames-per-second performance when I’m skateboarding (somebody stole York’s car, so this was his fallback option) around the fictional Louisiana town of Le Carré. And when I’m riding through town, the sound of my wheels grinding on the pavement is so loud that I can barely hear the dialogue as York cycles through the same six repeated “conversations” he has with the Me-Zach in his head. I can choose from four different control schemes, but I can’t invert the y-axis. My basic problems with the game are so basic that I have to believe they were put there intentionally, but … to what end?

The developers surely could have done better — technically, at least — if they’d wanted to. This all looks and feels like aging tech, so it must be style, not incompetence.

The weirdest thing is that, at a certain point, despite all of this broken surreality, the more I play, the more I want to keep playing. The more baffled I feel, the more compelled I am to unravel not just the mystery inside of the game but the mystery of the game, behind the game. I’m invested, and I want answers.

And that’s when it dawns on me: If I can’t tell why anything is happening, then what difference does it make? It’s a mystery, and I’m the detective getting deeper and deeper into the case of the murdered woman and the broken game, and no matter who I’m role-playing, I’m on the case.

Sometimes, I think the whole thing is garbage. Being annoying for the sake of being annoying is just being an asshole, right?

I know where I’m supposed to go, but it’s the wrong when. I try anyway, knocking at someone’s front door, and all York says is something about having bad timing — better try again later. I try this several times. It never gets better.

I’ve got to kill, like, six in-game hours to progress the story. Even my side quests are at dead ends. But they can’t seriously expect me to just wait out the in-game clock, right? Of course they could! Or maybe I’m missing something, but the game, up until this point, has trained me to expect to be inconvenienced, annoyed, and confused. Things going wrong and holding me back seem to be part of the entire grand design. What that design is meant to show me, however, remains a mystery.

So I wander around the city looking for random things to do. I shoot a platoon of squirrels (with a non-inverted y-axis at 11 fps). One of them is blue? I collect their parts and realize that they’re not squirrels. I don’t know why, any more than I know why I’m collecting their tails or why one occasionally steals the coffee that I didn’t know I was carrying.

I skateboard back to my hotel and walk up to my bed. Sure enough, I can sleep away a few hours — you know, like you do in video games. In-game hours later, only after I reach my destination within the appointed time frame, the game gives me a pop-up menu explaining that I can sleep back at the hotel to pass the time.

That’s clarifying and confusing at the same time. Did I do what the game expected me to do, or are we all on our own out here? I feel like I’ve never played anything that was so sure of itself, while simultaneously making me so unsure of exactly what is going on.

The whole thing seems set up to rely on my knowledge of gaming conventions, and if I missed how the bed works, the system will be explained only once I’ve suffered. It’s almost like a playful, or maybe mean-spirited, gaming vocabulary pop quiz. I think I aced it?

Or maybe it’s a bug. But how, exactly, could I confidently tell the difference in Deadly Premonition 2?

I’m going to tell you something that I can’t easily explain: When I advance the quest, I’m having fun. I barely know why, in the same way that it’s difficult to explain why paying off a mortgage in Animal Crossing is fun.

It makes little sense in the abstract, but I’m willing to put up with the mountains of horseshit — the assault to my eyes, a side quest that wants me to find a literal single grain of rice sitting somewhere in an entire open-world city without a hint or clue (and I did!), everybody’s interminable yammering monologues — just to see what’s next because everything exists for the purpose of constructing the weirdest world possible. And Swery isn’t afraid to get really weird, which is a powerful motivational tool for me to keep going to see where his mind goes next.

With some investment, things that were once off-putting become interesting — endearing, even. The more I hang around Le Carré, the more I want to know about it and its people. Talk my ear off, weirdos, because I am here for this. There’s a reason the original game is a cult classic, and the super fans will likely instantly start digging just as deeply into this mess, trying to scrounge up meaning where none may exist. Or maybe this game explains everything, and I just don’t get it. I genuinely don’t know, and I’ve made peace with that.

For the last few weeks, I’ve been making my way very slowly through The Last of Us Part 2. It is everything that Deadly Premonition 2 is not — polished, beautiful, coherent, gorgeous.

The Last of Us 2 has plot twists, but Deadly Premonition 2 takes place in a world that’s always twisted. Not knowing what to expect next and going along for the ride trumps technical ability in this case. (Yes, I’m straight-up defending a game that runs like garbage.) While some games want to shock us with violence, other games like Deadly Premonition 2 want us to question everything, and there’s something both cosmically frightening and utterly delightful about that end goal. I mean, who does that?

I don’t think I quite get it yet, though. I may never get it. But I’m a detective, and still I’m on the case.

Deadly Premonition 2: A Blessing in Disguise will be released July 10 on Nintendo Switch. The game was reviewed using a download code provided by Thunderful Publishing. Vox Media has affiliate partnerships. These do not influence editorial content, though Vox Media may earn commissions for products purchased via affiliate links. You can find additional information about Polygon’s ethics policy here. 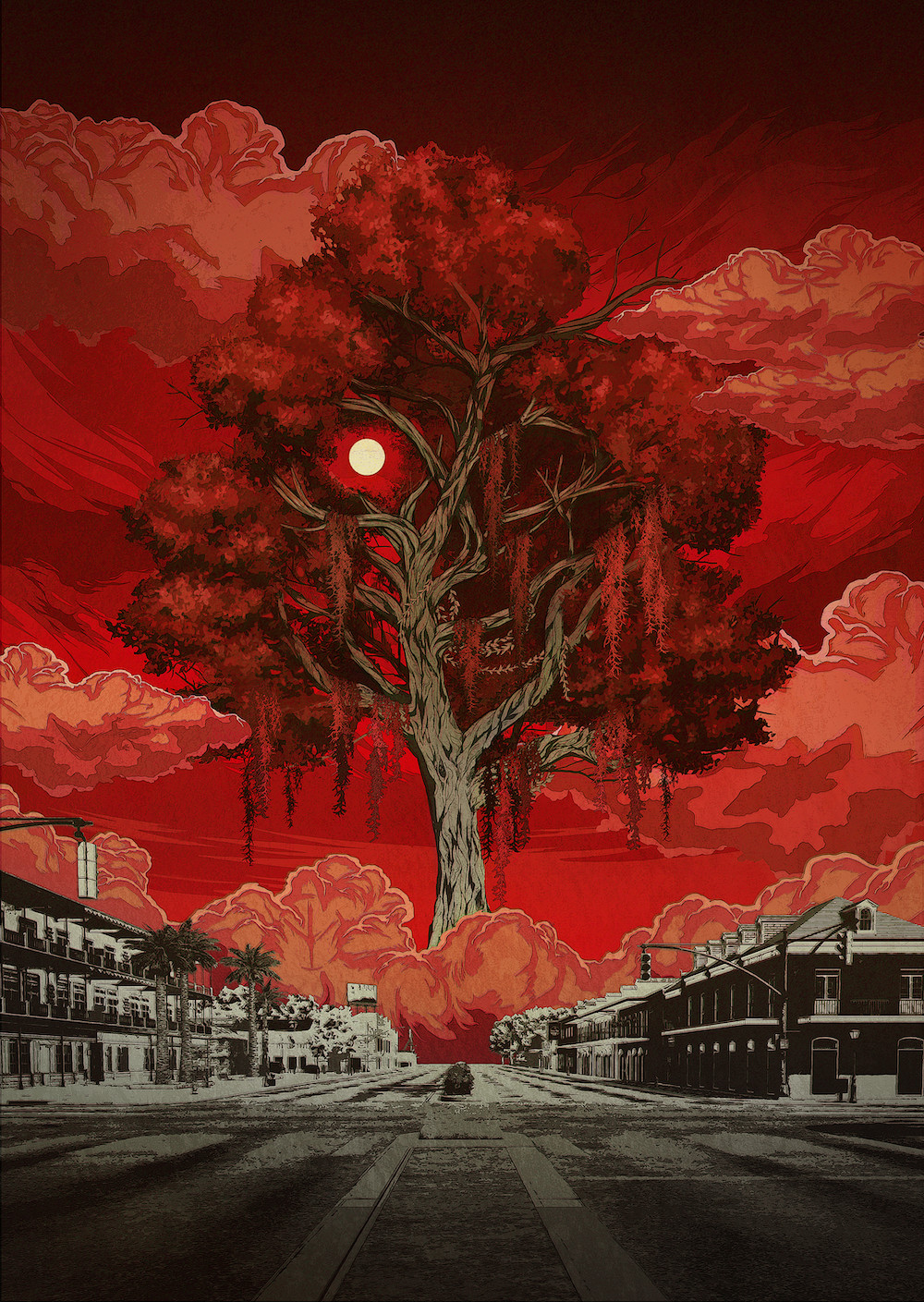 Deadly Premonition 2: A Blessing In Disguise

Because why not? At least I’ll have someone to talk about it with!