There’s little hope to be found in Until We Die, a base strategy defence strategy game about defending an underground train station against an onslaught of infernal beasts. Even the game’s name is a nod towards the overwhelming sense of hopelessness you’ll face as the Soviet Union’s last bastion of strength; after all, you’ll simply keep putting up defenses after defenses, until the walls inevitably crumble around your people.

But it’s also this despair that fuels much of the tension behind Until We Die, even if this punishing difficulty can feel like a never-ending struggle. The truth is that you won’t be commanding an army of trained soldiers, but a scrappy group of civilians. Their only means to defend themselves and your base is to smash their spanners and shovels against the bestial intruders—the very tools they’ll also be using to construct walls and forts around the station. Like many base defence games, a few precious hours will be allocated during the day to collect and mine for resources, bolster your defences, and ready your men for battle. When night falls, waves of enemies will be throwing themselves against your crumbling walls, flanked by your men on the left and right sides of your encampment. These defences will break eventually. It’s a Sisyphean task. Plenty of men will be lost. Morale—even that of your own will to keep on fighting—will dip significantly.

Base defense games are some of the most hellish experiences in games, as you’re locked in eternal conflict against cascading waves of beasts. That said, Until We Die still manages to offer some brief reprieve when you successfully expand your base, bit by bit, across the train station. Laboratories, tents, and bigger generators can be found and repaired to upgrade your defenses. Stragglers will come by, becoming an additional pair of hands to help you unearth more resources and bolster your defenses. For every few days you’ve survived, you’ll also be granted additional bonuses, such as stronger barricades, barbed wire, and even traps for your intruders to walk into. And as you delve deeper and expand further into the station, more resources and food can be unearthed. But this progress isn’t just your own; the infernal creatures that descend upon your camp will also become much more menacing the more you expand. Creatures with the ability to spit toxic bile can eliminate a small army within mere seconds. Despair will always linger within the deepest recesses of your head. 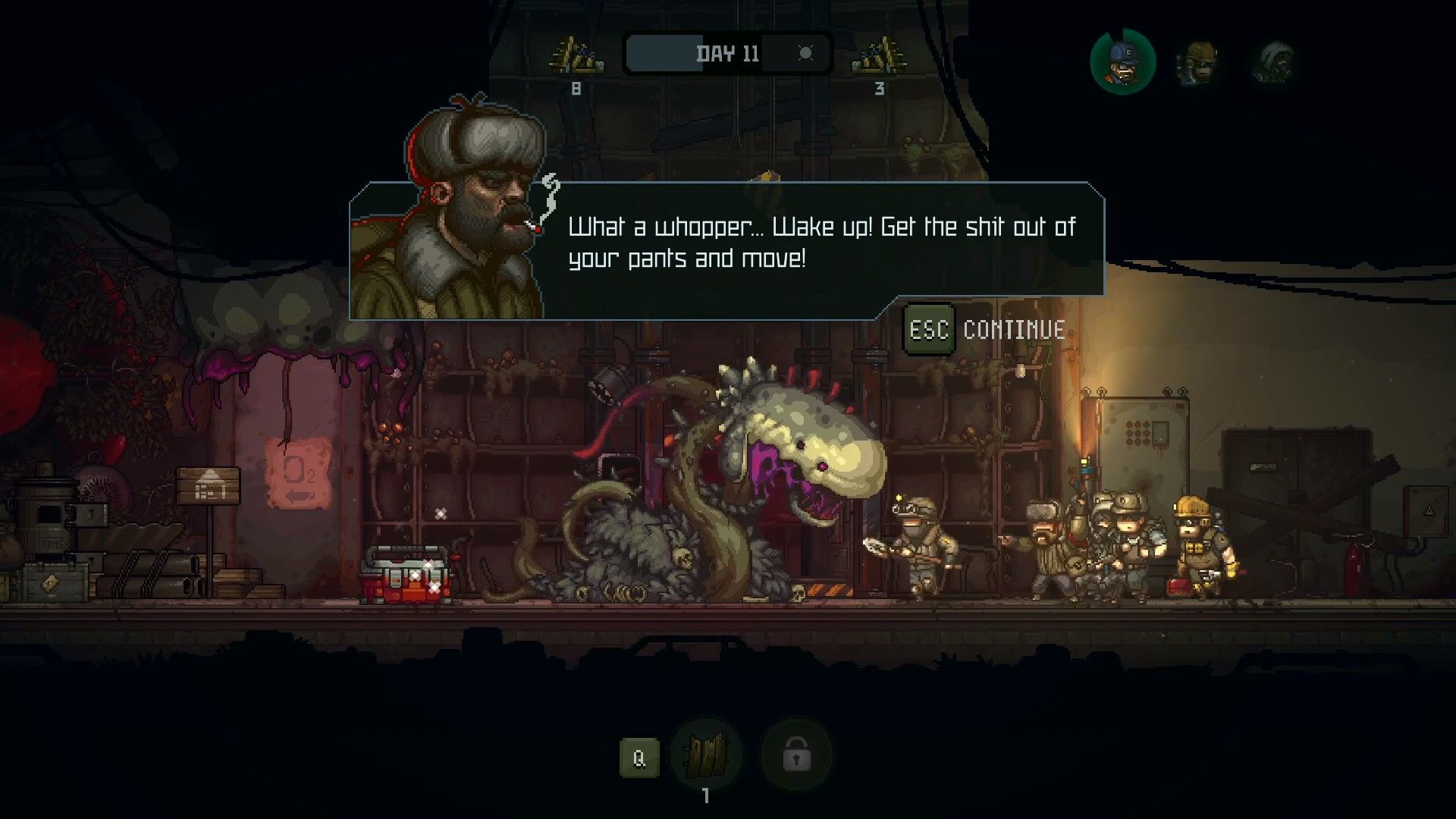 Of course, Until We Die doesn’t peddle in psychological horror like the dungeon crawler Darkest Dungeon. Its terrors arrive in predictable waves, and you can more or less imagine your final fate, perhaps even count down to your final days. Your men are unwaveringly loyal, willing to throw away their lives even as you lead them towards their end. But the point of Until We Die is to see how long you can survive against the brutality of the tunnels, rather than getting out of it unscathed. It's inexplicably difficult to complete, but there’s an intoxicating thrill in attempting to stay alive, as much as possible, against the game’s unrelenting challenges. Even if you fail, you can always refine your strategy in the next round. And the next. And the next. Despite what the game says about itself, death is really only the beginning.