You’re wandering across wastelands devoid of all but the most ancient and hardy life. It’s quiet, almost to the point of eeriness, when all of a sudden a machinated worm several times the size of Pokemon’s Onix erupts out of the ground with a bone-shattering screech – easy to live in the utterly uninhabitable when your organs are made of metal, eh?

Horizon Zero Dawn’s combat choreography was always one of its strongest points. From the untamed forestry roamed by sleek Stalkers to the high-octane Rockbreaker encounters described above, Zero Dawn’s environments always felt as if they were perfectly tailored to both their context in the world and your ability to navigate them with Aloy. The combat itself was also pretty good, pairing crunchy critical hits with satisfying feedback – although Aloy’s magic spear materializing out of thin air always felt a bit awry. For the most part, though, it was the set pieces themselves that did the heavy lifting, as opposed to pinpoint headshots and raucous Ropecaster stunts.

This looks set to change with Horizon Forbidden West. While I got into the nitty gritty of Horizon Zero Dawn’s skill tree when I spoke about converting traditional vaulting into functional swimming mechanics, the recent news that it’s due to be overhauled is extremely exciting. It’s not that Zero Dawn’s skills were bad by any means – they were great! But despite being predominantly developed on PS4, Forbidden West has one thing at its disposal that Zero Dawn was too much of a young ‘un to benefit from: the DualSense.

As well as revamping how skills work in Forbidden West, Guerrilla has implemented an all-new combo system with the DualSense’s cutting edge haptic feedback and adaptive triggers (plus Aloy draws her spear like a normal person now, minus the legendary sleight of hand). What this means is that, provided Guerrilla retains its excellence in arena design, combat is likely to be elevated exponentially. It’s not just a lucky shot to the correct machine shoulder anymore – you’ll be able to chain skills and attacks while the gamepad controls tension, responsivity, and more.

Again, I really enjoyed taking down large hunks of dino metal in Zero Dawn. The human enemies were a bit more boring, but I’m hoping that element of play will benefit from these new adjustments, too. What human enemies primarily lacked was spectacle – there’s a huge difference between a ten-minute grapple with a Snapjaw and sending an arrow sailing into a Shadow Carja numpty’s noggin. This recent revelation, though, combined with the combat we saw in the first official Horizon Forbidden West gameplay trailer, gives me enormous hope. The stealth, mobility, and combat mechanics on show there reminded me of an old Assassin’s Creed game, except catapulted into a technophilic fantasy setting developed with the fanciest tools modern money can buy. Decima is a great engine for beautiful environmental design – just look at Death Stranding! – but the hardware functionality of the PS5 and its controller ensure that the software potential of Guerrilla’s proprietary engine can be properly unshackled. 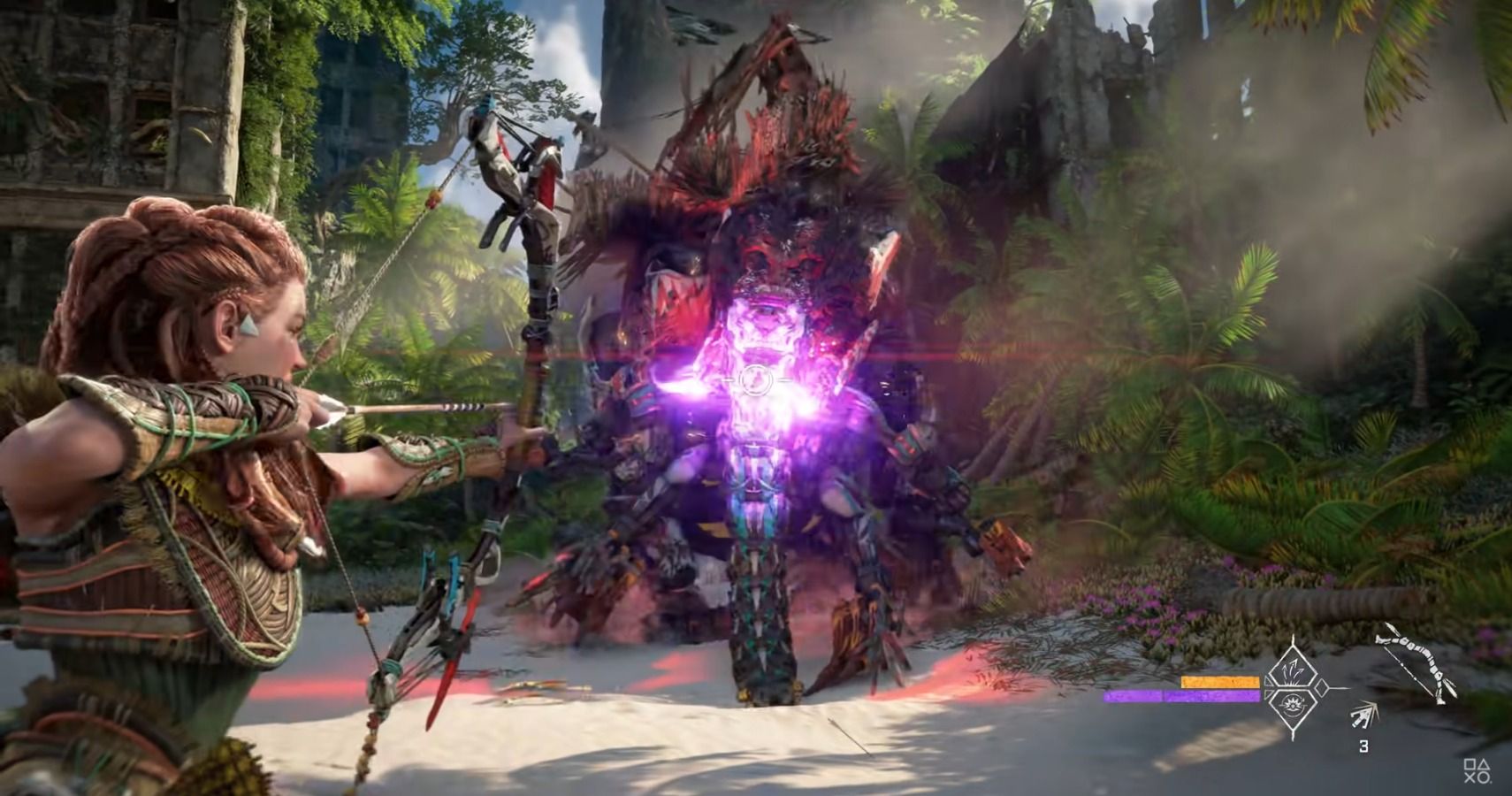 It’s still early days, of course. We’ve seen 14 minutes of gameplay and heard a little bit about the fact that combat has been redesigned with the DualSense in mind, adding in new skills and combos to make use of its improved capabilities. Judging on how solid the first game already was in this department, though, and given that its downfalls had more to do with firing arrows tipped with wet tissue paper than any of the truly difficult stuff – setting the stage, creating unique enemies, and making each fight a show in and of itself – I reckon this is that final, elusive spice destined to make the overall dish a delicacy. I mean, I don’t really like spices, and I’m not a man for delicacies either, but you know what I mean. I don’t have to eat video game combat, so it doesn’t matter what it tastes like.

I was sceptical of Horizon Forbidden West when I watched the first gameplay trailer. It was past my bedtime and it didn’t address some of the elements of the game I wanted it to – namely, how lifeless the cities in the first game were, and how improving that single aspect of the game could have an astronomical impact on the overall integrity and verisimilitude of its world. That being said, the more I hear about Forbidden West, the more my faith is not just restored, but amplified, like a Stormbird hooked up to Lamb of God’s Marshall rig. I’m not sure if Randy Blythe and co. are Marshall men, but you know what I mean. Hopefully… I have a lot of faith!

If combat truly kicks back and firing a bow is properly tied to the adaptive triggers, Horizon Forbidden West could be a phenomenal showcase of what’s to come in the future of game design.