Have you ever experienced something and had no idea if the appropriate reaction was to burst out laughing or cry for a month? If so, that about sums up my response to seeing the trailer for Palworld, the new open-world survival game being released by PocketPair. I’ve watched the trailer about ten times now, and I still have no idea what to make of it.

If you haven’t seen the trailer yet, it basically looks like a Pokemon game meets Breath of the Wild—that is, until you get to the part where guns are involved. As a brief overview, the Pokemon-like creatures in this game are called Pals, and you can have them garden with you, work construction, and aid you in battles. Though, in this game, “aid in battle” can mean “use as a meat shield then toss to the side.” The scene that includes what look like little Pichus in a factory crying while they’re crafting guns almost gave me a heart attack.

Palworld involves some of the typical survival game trappings, such as dealing with food shortages and harsh weather conditions. What seemingly distinguishes this game, however, is the part where you can eat your beloved Pals to survive or shoot endangered Pals for sport (though it is illegal, so you must try not to get caught). While this is jarring to imagine, it’s not so far off from how I’d imagine life if Pokemon were a reality.

Interestingly enough, I’ve written before on what this would look like, and this new game doesn’t seem to stray all that far off from my predictions. On the one hand, I’m incredibly interested to experience a game that shows us how things would actually go down if Pokemon (or the equivalent) were real. Many humans are cruel and selfish, and it doesn’t surprise me to see those aspects shine through in a more realistic Pokemon-type game. Exploring this could be a dark yet fascinating dive into human nature. 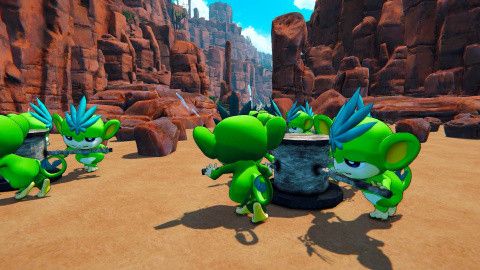 I’m quite curious, though, if the player will get to decide what type of person they want to be. While the violence against the Pals in this game horrifies me a bit, it would still be an enjoyable game if I can play a character that works to save Pals amidst their harsh reality. I mean, it says we can eat them to survive, but I already know that I’ll be the one letting myself starve before that happens. But allowing room to roleplay as whatever type of character you want to be would make me much less anxious to give it a chance.

While the realism elements in Palworld basically provide a take on the Pokemon world that I’m quite interested in despite how dark it is, I’ve also only experienced 20+ years of nothing but cute games that are mostly tailored to children from the Pokemon franchise. I have no problem sitting down to watch a violent or gory movie, but suddenly when I see what looks to be a Pokemon getting hurt, my whole world turns upside down and I don’t know how to handle it. It’s possible that this might just take some adjusting, but I am far from mentally prepared to gun down a bunch of Poke-Pals.

One thing’s for sure though, PocketPair has captured my interest. It’s like the train wreck that you want to look away from, but you just can’t bring yourself to. The game doesn’t come out until sometime in 2022, so maybe by then I’ll be able to toughen up enough to play this unspeakably twisted Pokemon knockoff.