In his recent AMA on Twitter, Iksar revealed that Blizzard will revisit the concept of Shadow Priests in Hearthstone. This is a fascinating revelation since the concept was only ever briefly explored in the Shadowform card from the Classic set, which never saw mainstream use in any meta and was ultimately moved to the Hall of Fame in 2020.

The news comes in response to a question about the future of Priest class design, which points out that unlike other classes, Anduin has a wide toolkit from a design perspective. Over the years the class has seen deck archetypes revolve around Healing, Random card generation, Traditional Control, and Tempo-Curve, so the idea of the other side of Priest, those who embrace the shadows, would be a welcome change for the class and its long-term design. Considering that Shadowform was never a good card in early Hearthstone, and that we have already seen another iteration of Shadow Priest with Shadowreaper Anduin in the Knights of the Frozen Throne expansion, how might Blizzard bring back the concept in a new and interesting way? 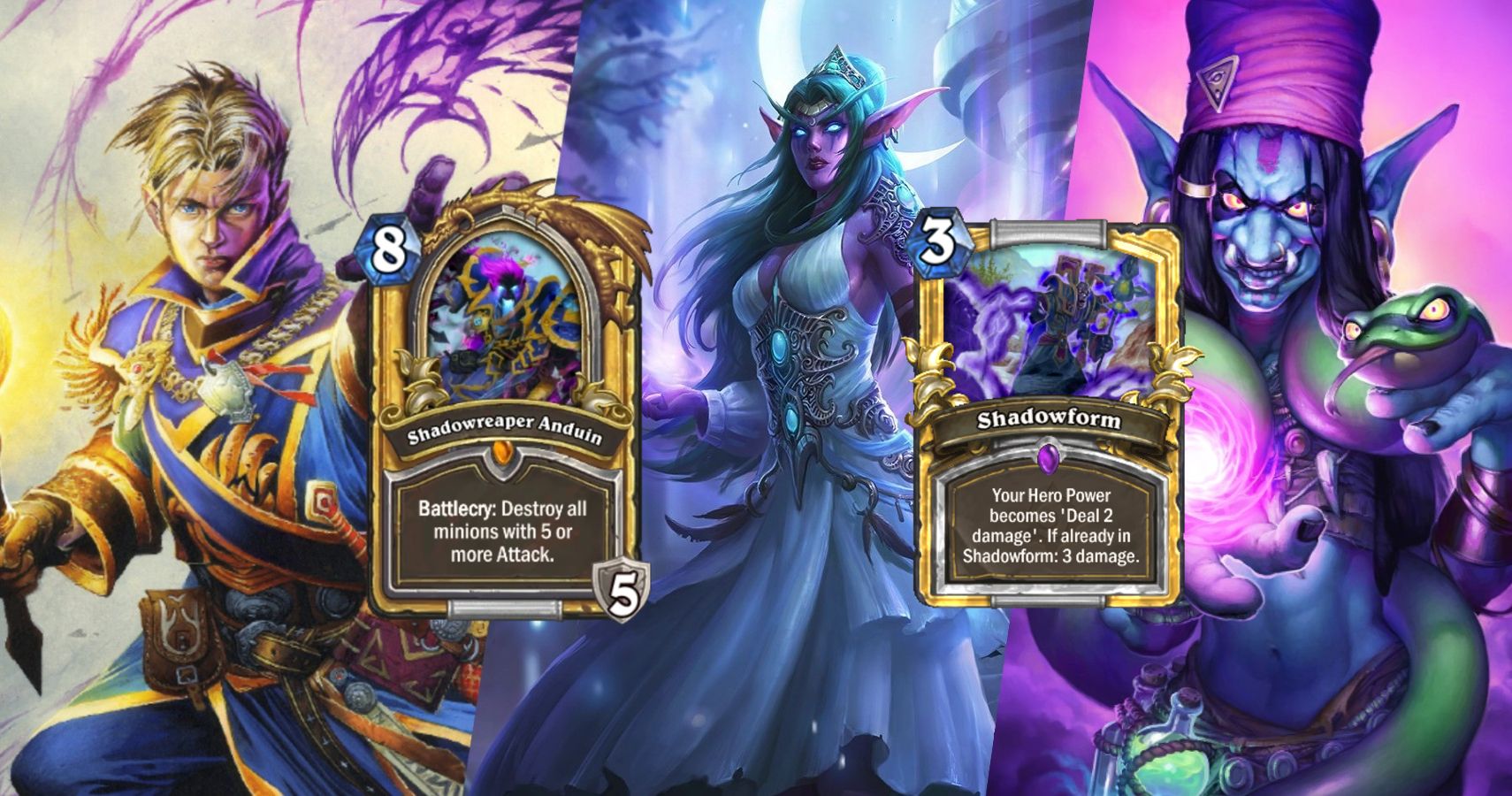 Shadow Priests In The World of Warcraft Trading Card Game

In 2006, Blizzard released the World of Warcraft Trading Card Game, a full eight years before the launch of Hearthstone. As a big fan of World of Warcraft, TCGs like Magic: The Gathering, and Living Card Games (LCGs) like Call of Cthulhu: The Card Game, this was an exciting time. One of my favorite decks to play was and remains to this day a Shadow Priest that uses heroes Runetusk or Omedus the Punisher. 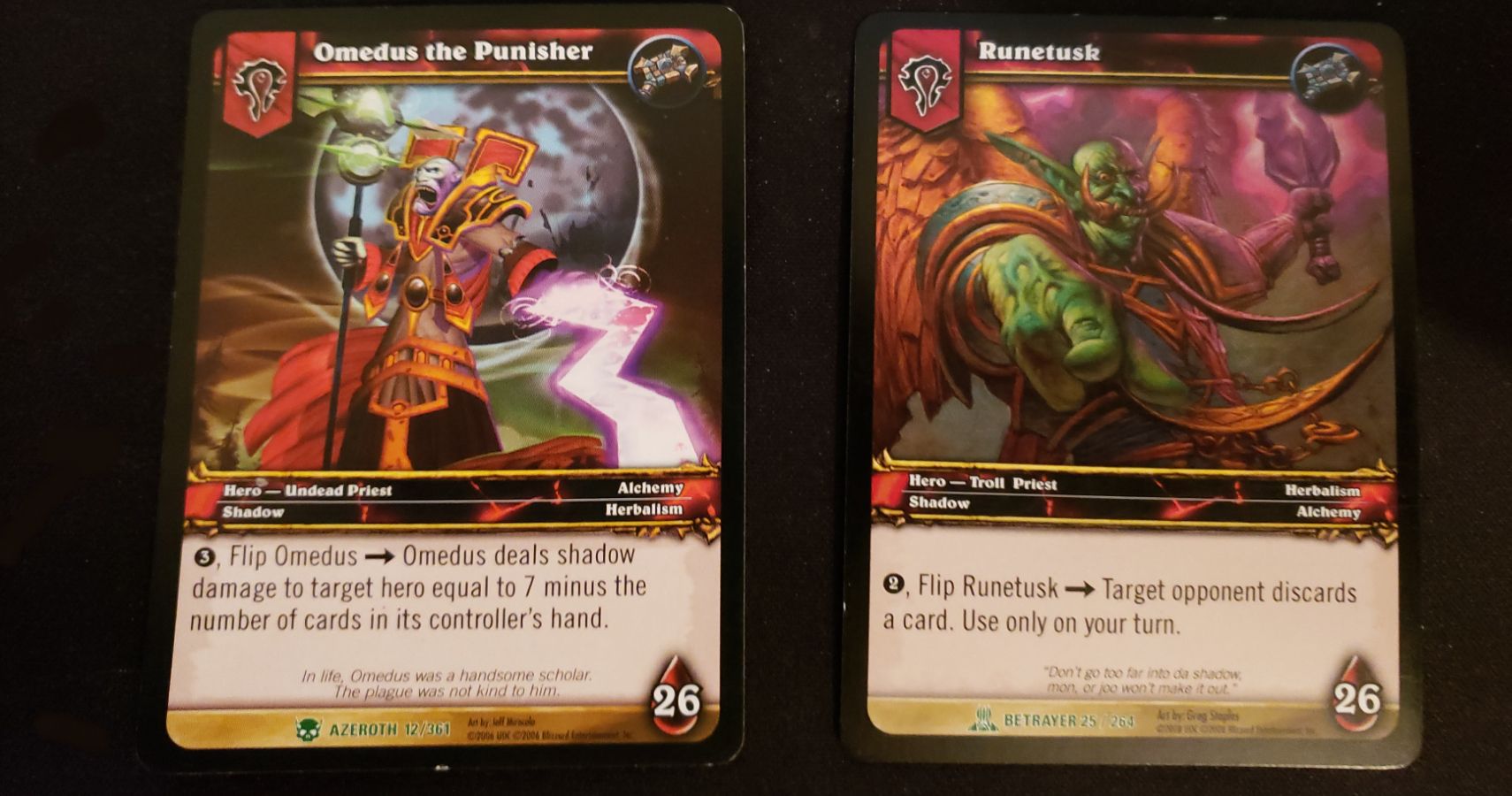 As seen in the image above, both heroes promote a playstyle that forces your opponent to discard their cards. With card advantage being one of the most important things in any TCG or LCG, I did not play this deck often against friends. Though effective, it became known as the least fun for anyone on the receiving end. Couple this with cards in the image below, along with several others like Mind Spike, Soul Rend, Shadow Word: Pain, Touch of Darkness, and others, Shadow Priests become known for leaving their opponents with empty hands and literally nothing to do. 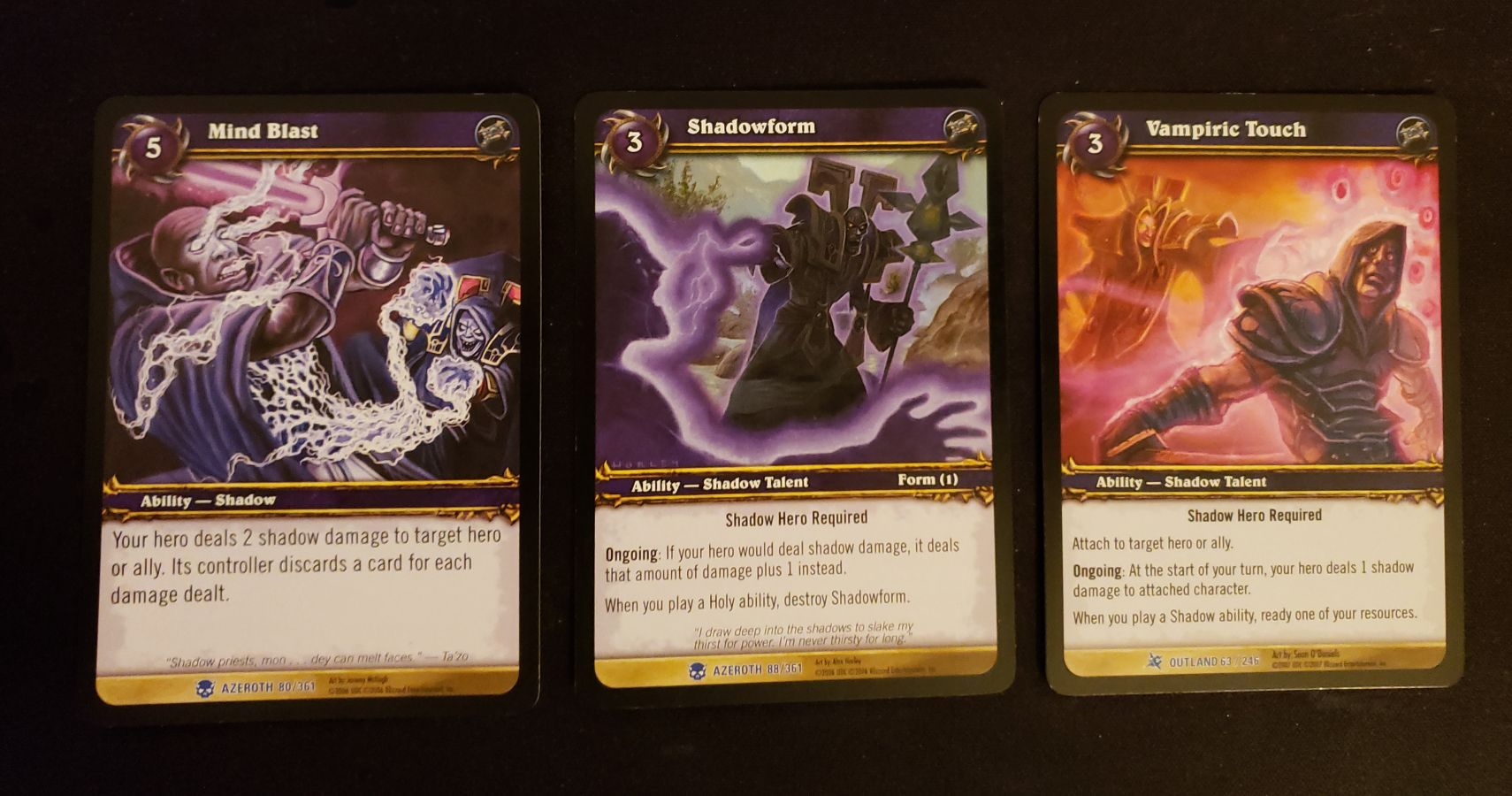 Therein lies a design problem for Hearthstone because a playstyle that makes an opponent discard their entire hand is terribly unfun to play against. Warlocks briefly had some experience with the Howlfiend and Treachery cards to make an opponent discard their hand, but this was not particularly effective or reliable in any meta. Instead, Blizzard seems to draw the line at cards like Dirty Rat for combo disruption, or mill which seeks to draw an opponent’s deck, but neither leaves you with an empty hand.

So, since a discard mechanic seems inherently off the table for Hearthstone, what about DoTs, DoTs, and more DoTs?

Another core design of Shadow Priests in the WoW TCG was Damage Over Time (DoTs) effects. As seen in the image above, cards like Vampiric Touch (the art for which is used in Hearthstone for the spell Mind Control) attach to a hero or ally and deal damage each turn. This would be a far better option for Hearthstone than an irksome discard mechanic, and the concept has already been tested once before with the Curse of Rafaam card from the League of Explorers adventure in 2015. 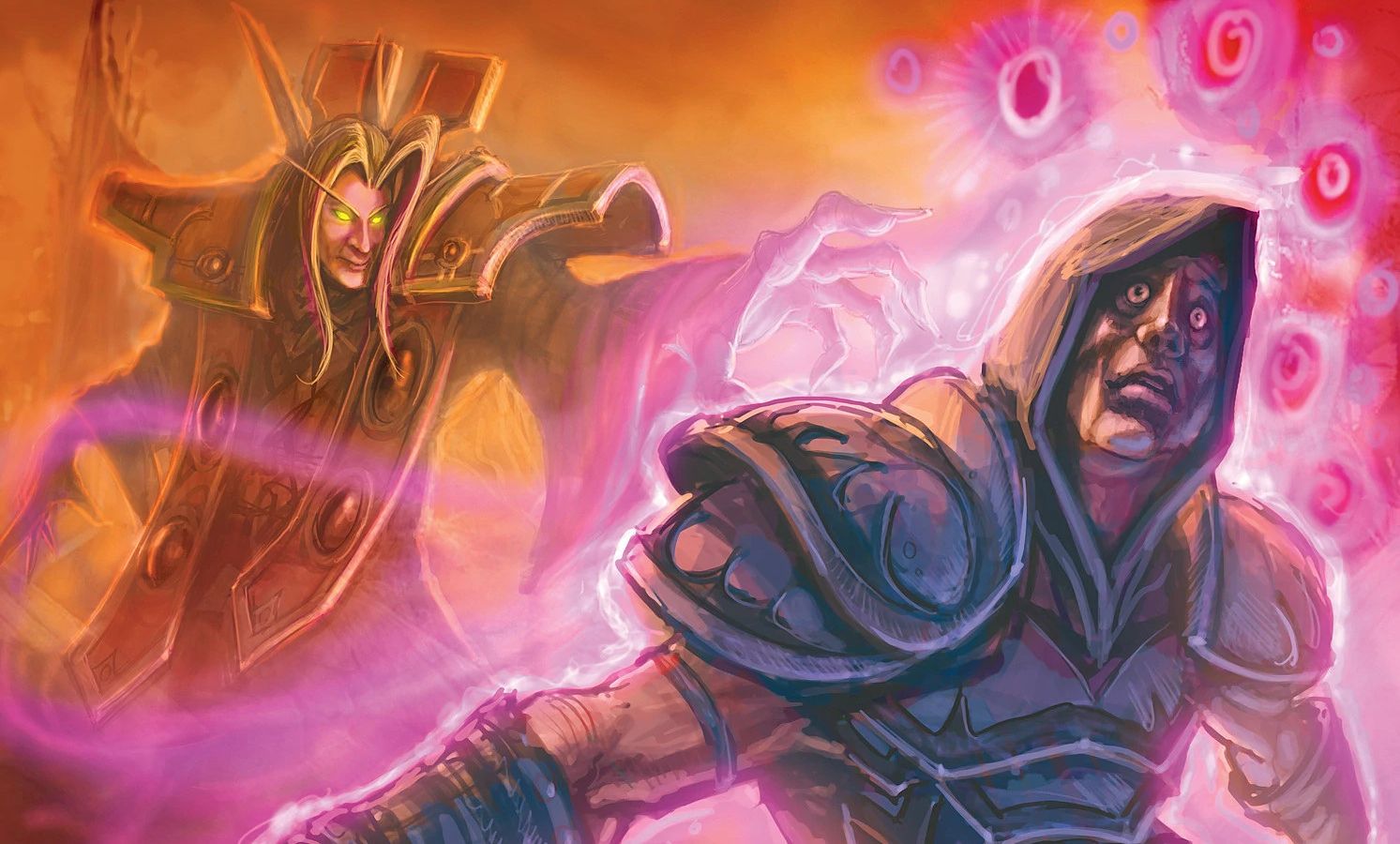 Since Blizzard has already done a direct-damage Shadow Priest with Shadowreaper Anduin, DoTs would offer you a brand-new way to play. Combined with Tempo-Curve or Control cards, the goal would be to chip away at an opponent’s health, and in Standard, there are few classes with the ability to heal.

Granted, I will concede that DoTs might only work in Standard, because in the Wild format there is simply no desire on Blizzard’s part to slow things down for DoTs to be effective. In Wild, a high-rolling Discard Warlock or Odd Paladin can take your hero down by turn four or five, and the slow burn of a DoT would need a ton of support to be viable there.

In any case, Iksar’s revelation that Shadow Priests are coming back in some form is still exciting, not only because it was my personal favorite way to play the Priest class in both the WoW MMO and TCG for years, but also because it would be nice to move away from so much random generation in the class. It may not end up this way, but the possibility certainly exists.

NEXT: Skyrim: Beginner’s Guide To Modding On PC And Console 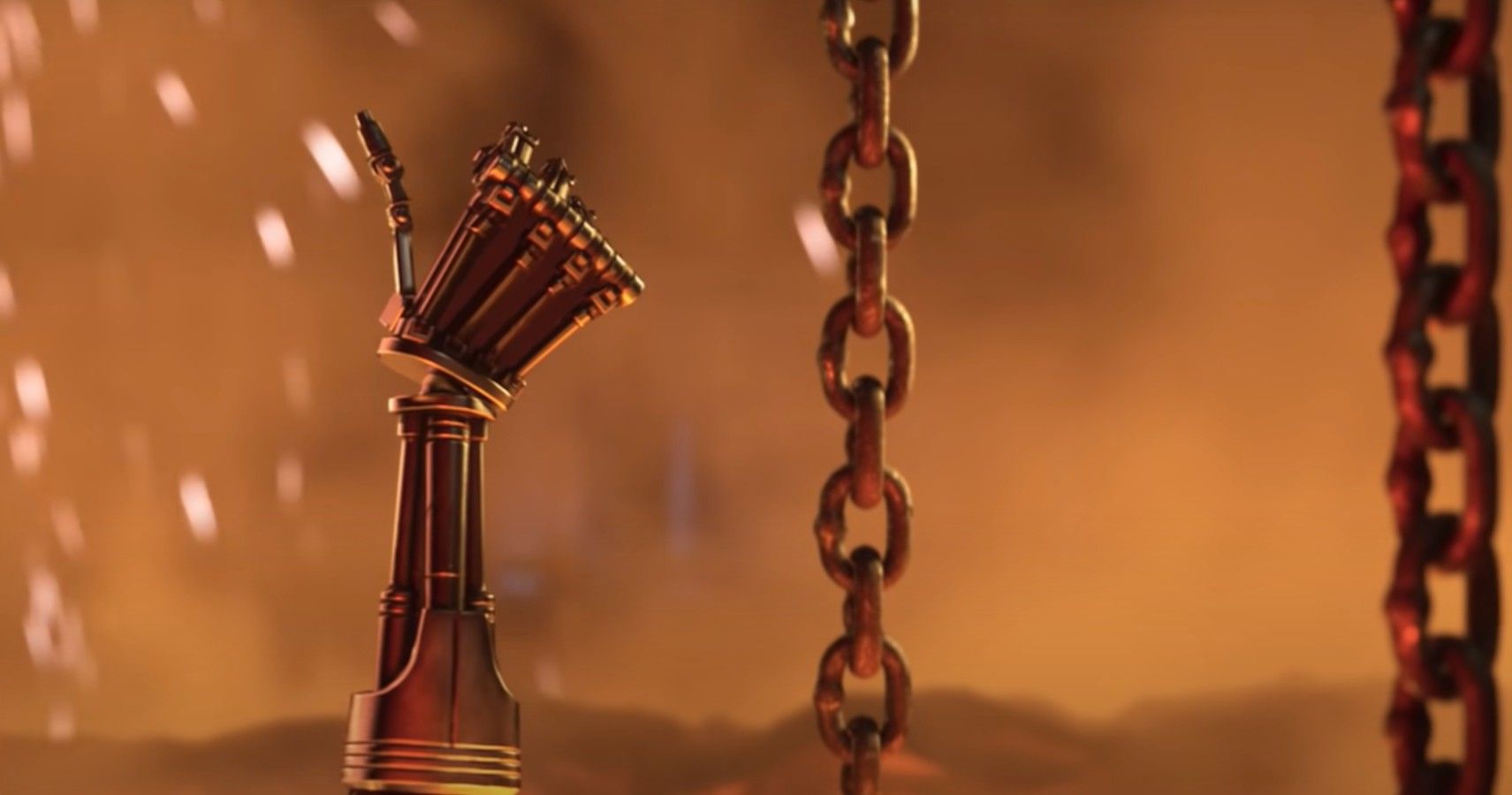