It’s the second week of our indie spotlight, and it only feels right that – as a British writer who says things like “bloomin’ ‘eck”, “jolly good”, and “toot toot” all the time – that I should take a look at Not For Broadcast, the British-designed indie game that tells the story of a probably-caffeine-addled television controller coming to terms with the slow, poisonous decay of modern media.

Not For Broadcast is deeply chaotic and bitingly satirical. Your role is to censor, warp, and direct a series of television channels, from political broadcasting to sinister advertising that blares on in the background almost constantly. The early part of the game is all about bleeping swear words – cue the Americans missing out on bleeping “fanny” as it's mumbled by a pint-sloshing politician. It means the opposite side of you here than it does over the pond.

That’s because, despite its dystopian overtones, Not For Broadcast is silly. Completely silly. In a sort of ‘Bottom’ way (that’s a British TV show, maybe you Yanks have one called Fanny), with the crude humor and silly puns – an actor flashes up as starring as General U-Bend in an Archers-esque countryside domestic soap opera – that Rik Mayall and crew would’ve appreciated. These moments are hidden in flashing screens and audio snippets. They’ll make you laugh because you don’t expect them.

This silliness is juxtaposed with serious commentary on the bizarre state of modern hyper-media and hilariously acted scenes. Most FMV games fail because their acting is sub-par. Plenty of content creators I watched play Inscryption skipped straight over the FMV scenes, but they weren’t too bad. The genre just comes with a lot of stigmas and cringe attached to it. Not For Broadcast is different. These are silly actors doing silly things and doing it well. 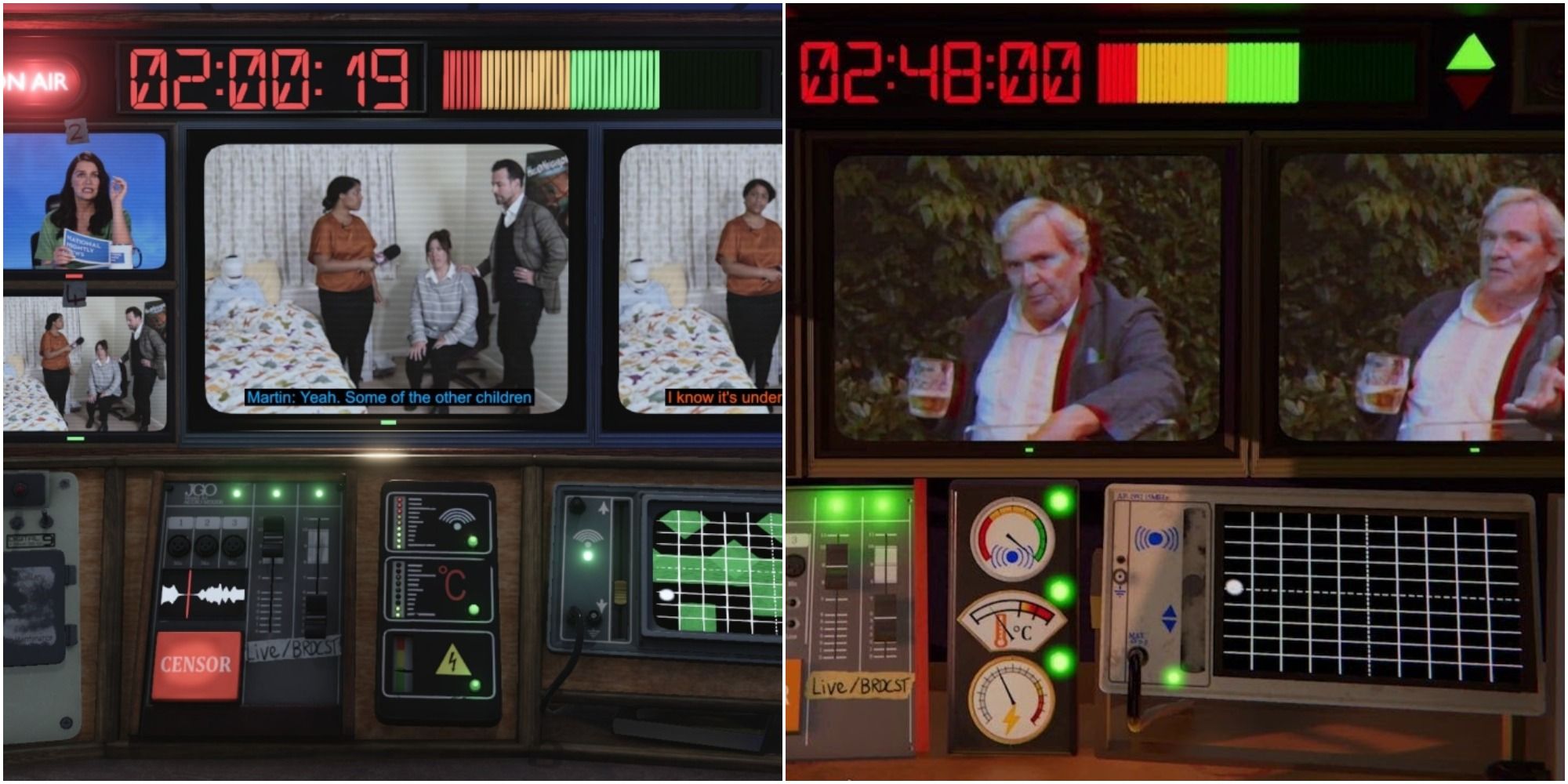 The humor is created by the player and your success and/or failures with the switchboard. You have to imagine an old grandma sitting at home watching the television (she’s eating beans on toast). The broadcast wildly flicks between three unhinged individuals talking about living through the lockdown—trapped in a hotel and then complaining about no one noticing they’ve filled their beach house with beef, I don’t know, I really don’t—and then to a short clip of a man eating raw meatballs. Grandma doesn’t have a clue what’s going on, and, clearly, neither do you.

Not For Broadcast’s design is impeccable. Audio cues and slick button management make what is essentially one of the best multi-tasking simulators I’ve ever played. It's completely hectic at points and immersively stressful. My game stuttered at one point because my Steam started downloading a game in the background—I was so deep into the blur of chopping and changing TV channels that I thought it was part of the experience. This tape goes here, oh, that man’s just said “fuck” on live TV and I missed the bleeper, oh, Christ, this camera is pointing at the wrong person. I’m lost and I love it.

Because for all Not For Broadcast’s acting, storytelling, seriousness, and complete ridiculousness, it’s still a game about managing time and staying hyper-vigilant—akin to Papers Please. The protagonist, much like in Papers Please, is divided in half between his engrossing and stressful job and caring for his family at home. Learning the story of the protagonist behind the switchboard is an added benefit, but this part isn’t necessarily what captured me the most. It’s the rest of the game’s storytelling that gets you.

While all this chaos unfurls around you, there’s actually a gripping story being told. I first played this game back in 2020 and knew that I would have to wait to see how everything turned out. Its finished form is exhilarating, sad, and funny. You are almost entirely responsible for the twisting, turning narrative through a number of your own choices. It’s dark, shocking, and hilarious. I can’t spoil it, because to tell you what’s going on is to rip the heart out of the game.