On the surface, Papers, Please seems like a dull and boring game, but it’s a heart-pounding, nerve-wracking, morally dubious, soul-crushing experience. I consider myself a fairly left-wing person, but stepping into the shoes of an immigration officer with a family to look after turned me into a good little fascist far quicker than I’m comfortable with.

The game was made by ex-Naughty Dog developer Lucas Pope, who was inspired by films like Argo as well as his own traveling experiences to make an immigration game. Set in the fictional country of Arstotzka, based loosely on the Russian-controlled East Berlin, Papers, Please reveals that total abandonment of your moral and political values is only a few missed meals away. 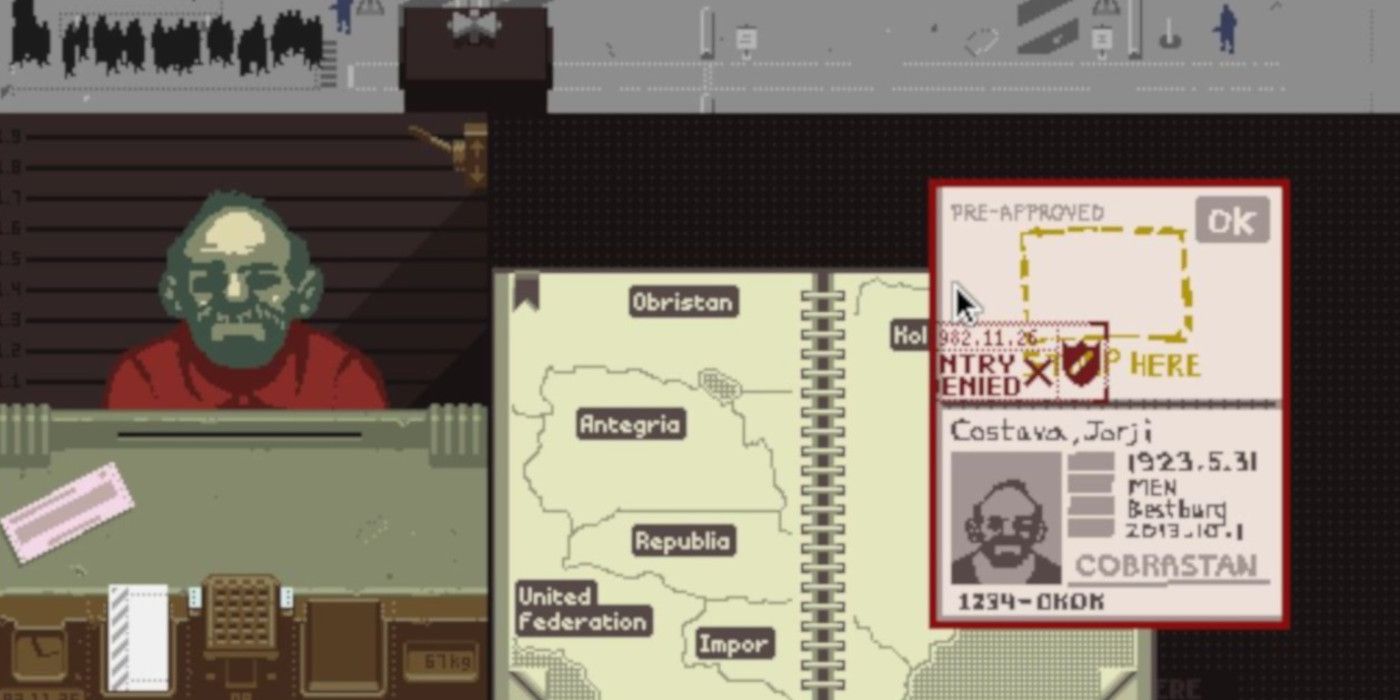 Papers, Please has a cold, dark, pixelated aesthetic that perfectly fits the fictitious Eastern Bloc setting. Tensions in the region run high, as a fragile peace has just formed amongst nations that have been at war for six years. The story of the game starts with my first day as an immigration officer at a new border checkpoint, my job is to ensure people coming into Arstotzka have the right paperwork. As the days progress, I have to check more and more things: passports, entry tickets, work permits, vaccination records, diplomatic status. The experience is deliberately clunky, I have to juggle multiple documents on a small counter just to confirm someone’s identity.

At first, denying entry based on an expired passport or invalid work permit doesn’t feel too bad, I’m just doing my job. But then I get the sob stories; people escaping forced prostitution or trying to reunite with loved ones. So I let someone in. The grating sound of a citation being telegrammed to my booth cuts through me like nails on a chalkboard. I know I’ve messed up, but it’s just a warning. I do my job properly, but then let through a husband who just wants to reunite with his wife. The sound of the citation bores into my head again. Final warning. “Okay, I can break the rules twice a day,” I think to myself. That sound tears through me again. Someone I let through had a passport that was issued in an invalid city. No more warnings, this time, I get fined. 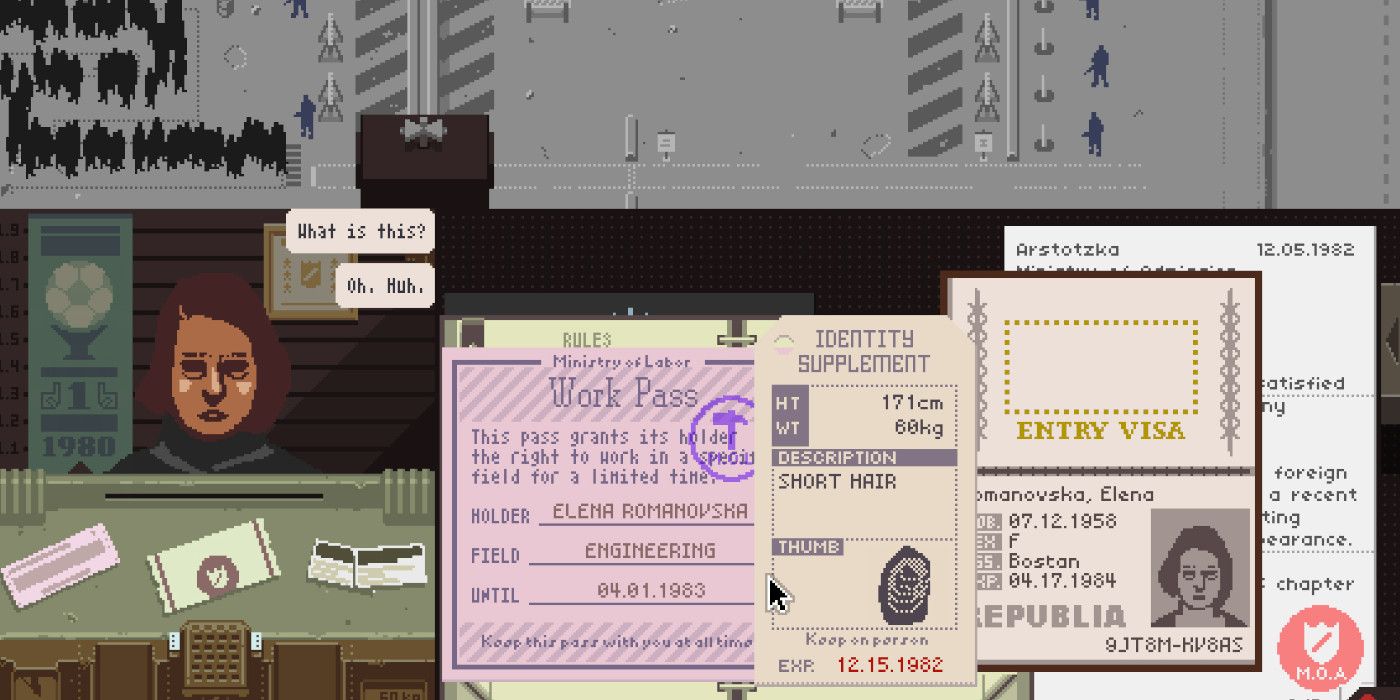 At the end of each workday, I decide how to spend my wages. Rent is taken automatically, and then I can choose between food and heating. At first, I can afford all of this and even put some money into my savings. I get paid based on how many people I process, and each day only has a set amount of time in it. One day, one of the people I let through throws a grenade at a guard, so the day is cut short. My family will have to go hungry, and I learn that each day is not guaranteed. Speed is of the essence, but make a mistake and get met with that grating citation sound – and mistakes are easy to make as the game progresses, and I have to check more and more documents. I may have to stop helping people, or I risk my family starving. The state is the real enemy here, giving me more and more work but not increasing my wages while also increasing my rent.

The terrorist yesterday was from Kolechia, so now I have to start using a body scanner to search all Kolechian’s for weapons. “You’ve been selected for a random screening,” I say as I force someone to strip and be scanned. As an Arab who has almost never gone through airport security without a “random” check, this moment hit me hard. I realised that the game had very easily converted me into someone who was “just doing their job”, even if that job meant putting people through the same dehumanising treatment I face every time I want to go on holiday. It all felt very Stanford Prison Experiment.

One man had some contraband strapped to his leg. When I questioned him, he said it was only medicine, but I couldn’t afford to risk losing another day’s pay, my family was already hungry. As I had him detained, he spat out at me that “they must pay well for such loyalty, dog.” They didn’t pay well. I was barely keeping my family fed anyway.

I stopped doing the screenings, and I took the fines. No terrorists got through, so I felt happy with my choice. But then my son got sick, and I couldn’t afford his medicine – it felt like karma. My morals were going to get my son killed. The summary at the end of the day is kept simple to let you project whatever feeling you want onto your family. They’re just tickboxes: wife, son, mother-in-law, uncle; hungry, sick, cold. Even though they weren’t real, even though they didn’t have faces or names, I felt for them. 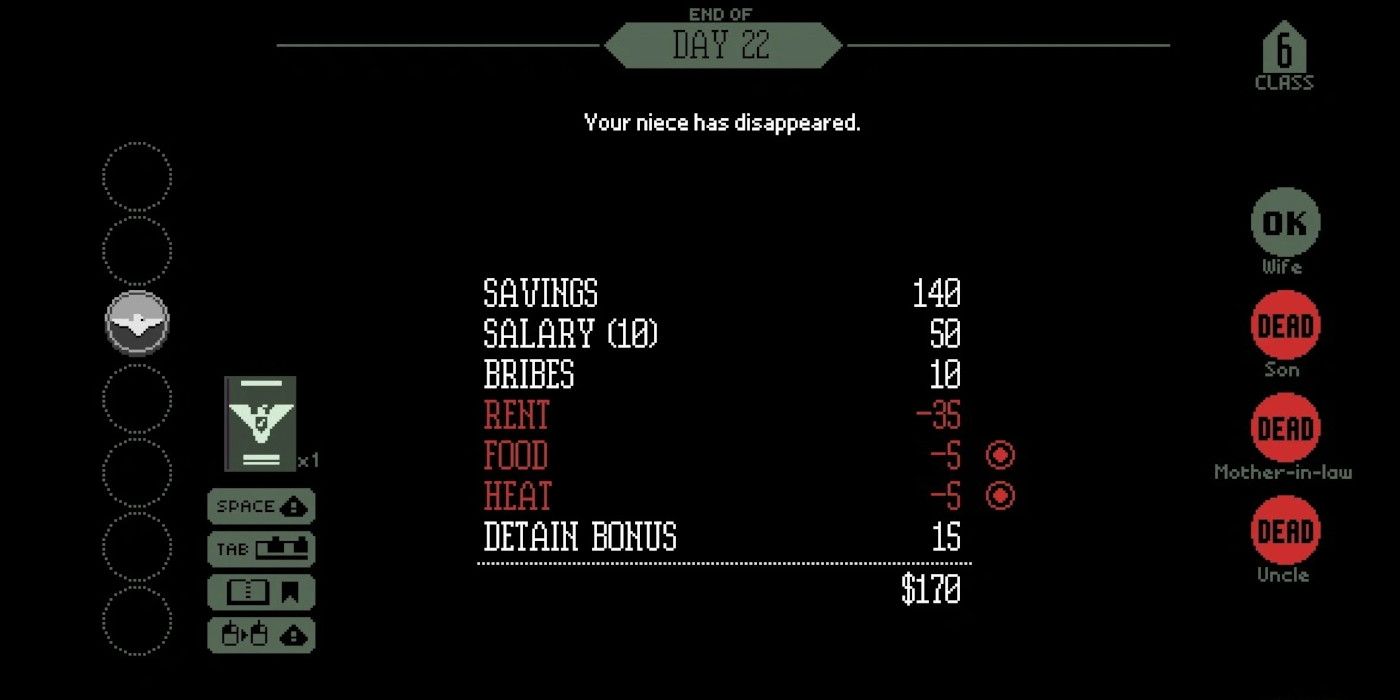 How do I decide between morals and family? How can I justify helping a stranger while letting my son die? Every time I tried to help someone, the grating sound of citations reminded me that it was my family I was hurting, not myself – that’s the hardest part of the experience. My character was always fine, never hungry or cold or sick. But my family? They’re the ones who rely on me to provide for them. As I kept playing, I was asked for help by an organisation intent on overthrowing the authoritarian Arstotzka government, but I couldn’t keep my family alive long enough to see their dream come true.

The game didn’t make me sympathise with authoritarian regimes, it made me furious that those regimes put people in impossible situations. I can try the game again. I can be faster, I can learn the names of the issuing cities and make sure I save my two mistakes for members of the resistance. But a real person can’t. They don’t get a second chance at toppling their government or protecting their family. Papers, Please steeled my resolve that it’s corrupt and exploitative systems that need to be torn down, not individuals. It also showed me how important it is to fight back against authoritarianism while it’s still possible, before our families’ lives are on the line.

Alfred Henry Lewis said, “the only barrier between us and anarchy is the last nine meals we’ve had.” All it takes to completely change a person is going hungry for three days. I stopped helping people and tried to save my family, but there were too many documents to check, and I kept making mistakes. After my family all got sick and died, it was game over. I was informed that the nation of Arstotzka helped families, so my job would go to a man who still had one. A final kick in the ribs for the loyal dog of an authoritarian regime.

Next: Video Games Let Me Live Out The Fantasy Of Owning A Home