Resident Evil Village feels like Capcom’s Greatest Hits album. The seventh instalment of the survival horror series was a bold and inventive step into new territory, while this next adventure takes that formula and slathers it in archetypes that have defined the series for decades. In essence, this is a spiritual successor to Resident Evil 4 – an attempt to replicate the brilliance of a timeless masterpiece for a new audience.

The setting, characters, tone, and pacing of the experience all cater to the identity Resi 4 helped cement, even if at times it stumbles when it could have soared. Village is Capcom at its most confident, delivering a dark, foreboding journey into unfamiliar territory that also has a clear path towards the future and exactly where Ethan Winters and company are headed next. I’m unsure it reaches the heights of what came before, but this remains an accomplished chapter in a world that continues to surprise.

Resident Evil Village once again places you into the shoes of Ethan Winters, a heinously bland protagonist who has found shelter in an unspecified European country since the events of Resident Evil 7. Ethan, his wife, Mia, and their daughter have been provided with a new life, a chance to start afresh following the trauma that all but ruined them in the last game. Obviously, this peace doesn’t last and things quickly take a morbid turn. 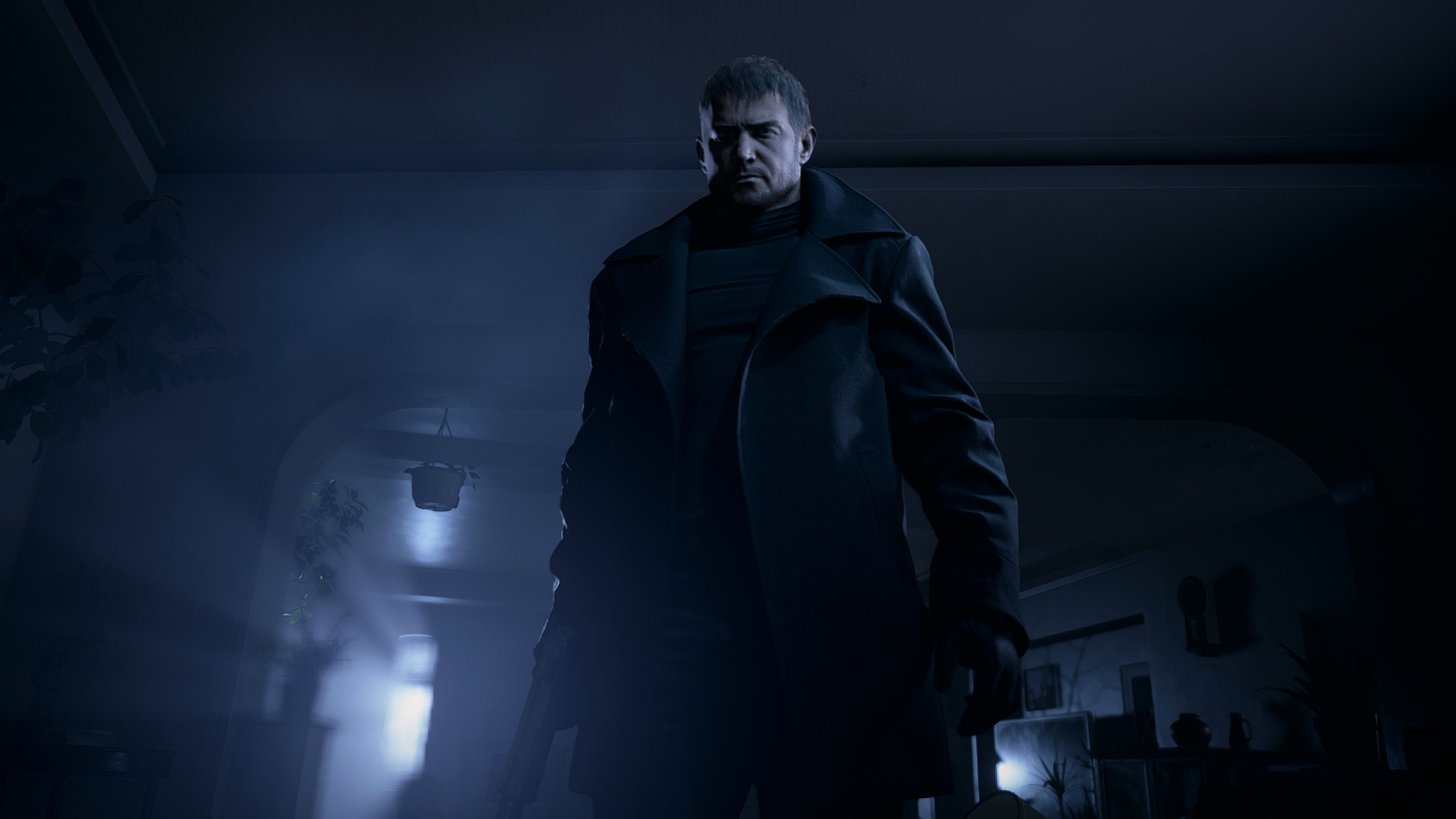 After a peaceful opening exploring the Winters’ home and putting Rose to sleep, Chris Redfield raids the place, murders Mia, and steals your baby. Ethan protests – as you would when your wife is gunned down by your pal – but Chris begs him not to get involved, knowing that the scrawny man would just get in the way of his massive, massive biceps. Upon being knocked unconscious and taken hostage, Ethan soon awakens in the wreckage of a fallen vehicle. He’s the sole survivor, with streaks of blood and undecipherable documents being his only clues amidst the snow-drenched darkness. But his daughter is missing and in danger, and that’s the only motivation he needs to save the day.

So he moves forward, walking hesitantly into the night in search of something, or someone, to tell him exactly what is going on. Similarities to Resident Evil 4 rear their head constantly throughout the opening as we stumble across an abandoned cabin, pilfering through blood-soaked belongings in the dead of night. Family portraits and hastily scribbled notes provide little relief, with the violent rumblings above us showing that something definitely isn’t right here. The darkness is soon behind him as he stumbles into the titular village, with Castle Dimitrescu towering in the distance like an occult monolith.

When I said it was just like Resident Evil 4, I mean that literally. Village purposely apes the iconic opening for a new generation, although unfortunately it’s not nearly as well executed. Still, the atmosphere is palpable, drenched in the anxious hopelessness that Capcom expressed perfectly all those years ago. Just like Leon could back in the day, Ethan can push furniture in front of doors to keep enemies at bay, but this mechanic feels woefully underbaked. Aside from the opening sequence and to uncover rare collectibles, I never found myself seeking shelter in the village, it was much easier to march outside and murder whatever beasties ailed me. Despite being survival horror, Capcom far too often forgets about the ‘horror’ part of the equation.

From here, it’s off to the zombified races. The village is a sprawling landmass that slowly opens itself up throughout the 10-hour campaign, emphasising backtracking as you unlock new items and routes for uncovering treasure and other collectibles. But first, a trip to Castle Dimitrescu is in order. While the castle and its inhabitants have been making the internet weirdly horny, this location is easily the game’s most underwhelming. Much of the marketing for Village has focused on Lady Dimitrescu – a tall, beautiful lady who I desperately want to murder me. She’s gorgeous, her horrifying dominance sinking itself into the consciousness of millions before the game’s release. Sex sells, and Capcom knows it.

Sadly, her presence in Village is laughably brief. I won’t spoil anything here, but those hoping for this to be a ‘please step on me, mummy’ extravaganza will be sorely dissapointed. The castle itself is also rather bland, when it could have easily matched the scope and ambition of Raccoon City’s Police Station when it came to puzzles to solve and discoveries to be made. Instead, it feels like a fractured introduction to the world of Resident Evil Village before we’re thrown into the wider world. It’s still great, but with no option to return after departing, the castle quickly becomes a distant, foggy memory. What I’m saying is: Resident Evil Village has mommy issues.

Things are far more engaging once you’re let loose in the hub-like village. While events unfold in a linear fashion, you’re free to explore the world at your leisure, finding items, ammo, and other goodies that will prove invaluable for the mission ahead. 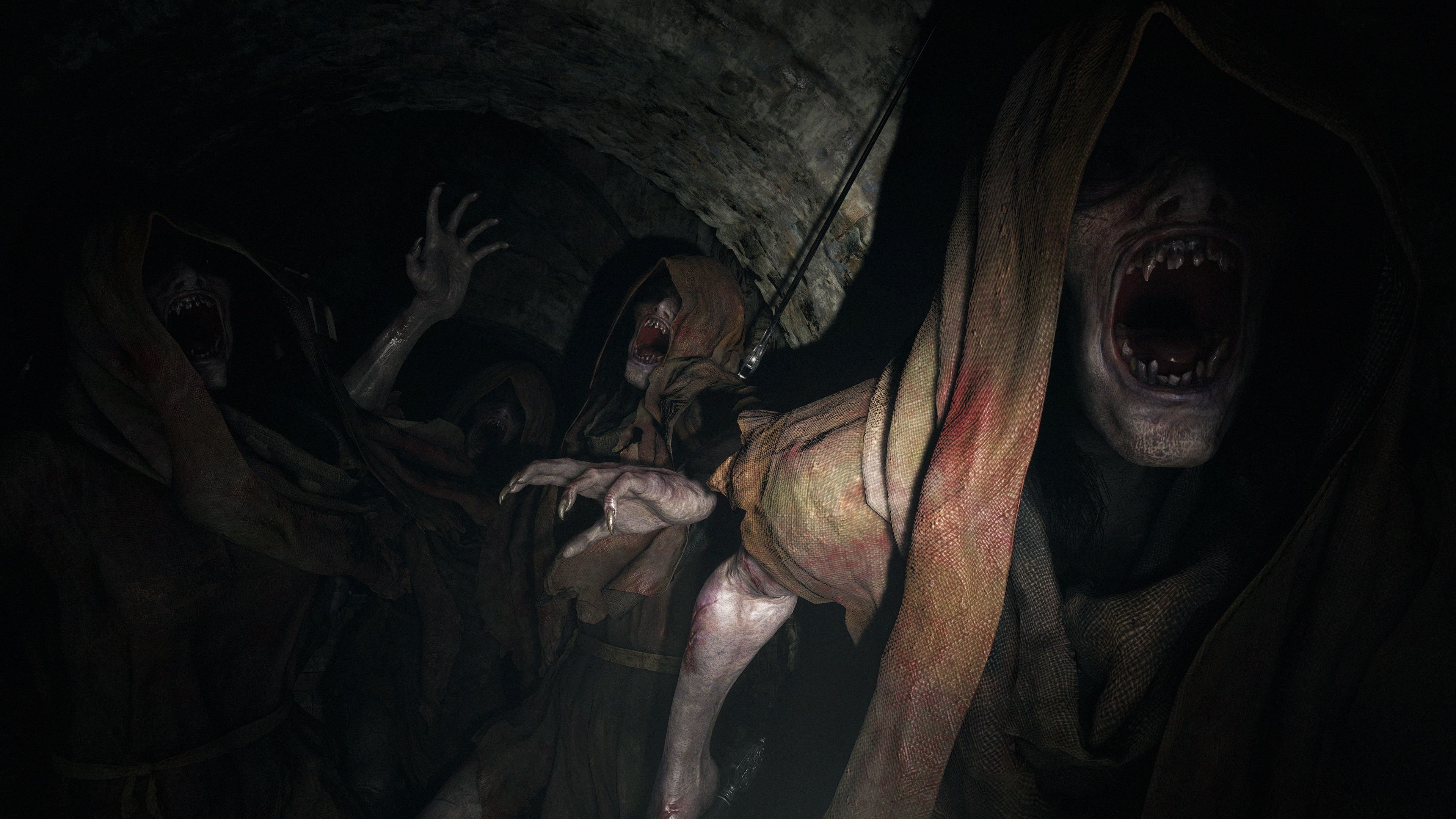 The personal dynamic found within the Dimitrescu Family is incredibly compelling. Without delving into concrete specifics, Village takes time to explore the personality of each child, their monstrous appearance giving way to inner insecurities about their own self worth in the eyes of their matriarch, Mother Miranda. While they might seem like terrifying creatures from our worst nightmares, they are still people, even if some of them can turn into massive, rotting fish – they’re individuals with doubts, worries, and irrational fears that underpin their internal motivations. Of course, none of that matters once I’m pilling dozens of shotgun shells into their faces. The storytelling borders on nuance once or twice, but it always falls back into its usual B-movie stylings.

The sheer variety of locations and enemies across Resident Evil Village is staggering. Capcom received a lot of flak for the gooey monsters that dominated the last game, which both weren’t very fun to fight and just looked unimaginative when compared to the Baker Family. By comparison, Village feels like a victory lap over the corpse of this criticism. Throughout the game you’ll battle with werewolves, zombies, vampire bats, evil witches, and more. Boss battles are also terrific, epic confrontations that require ample firepower and sufficient smarts to conquer.

It constantly surprises, with the final act providing some of the most dramatically poignant moments in Resident Evil history, offering up narrative revelations that are bundled alongside brave, inventive gameplay ideas that make me so excited for where this franchise might go next. There are still moments of tedium, with some levels content with just throwing endless waves of foes at you when the only way forward is to fight past and flick a switch. It’s an exercise in wasting resources as I find myself locked in inescapable animations over and over again. Instances like this simply aren’t fun, and show Village moving dangerously close to the action-packed drollness of Resident Evil 5 and 6. 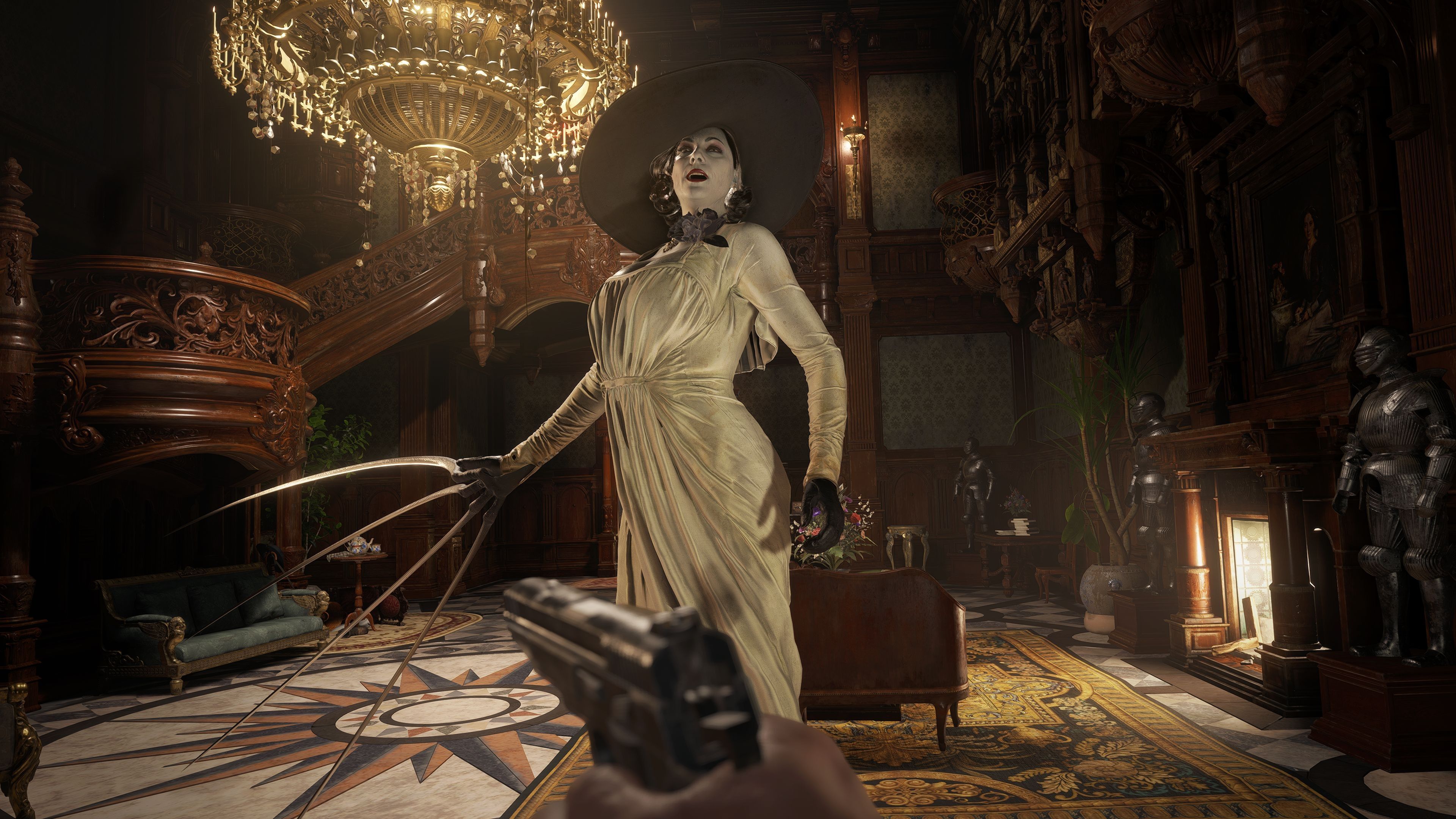 Village is at its best when your weapons are taken away. The game’s scariests section is set in a luscious estate. Here items are stripped from your person as darkness descends upon the expansive halls and claustrophobic corridors. It’s reminiscent of Konami’s P.T., the environments designed to trick and disorient as the true nature of their existence comes into view. It’s overwhelmingly bleak, culminating in a disgustingly morbid chase sequence where an unknown horror stalks me around the house, laughing and screaming while threatening to swallow me whole as I desperately try to restore the power.

With the exception of moments like this and the overall atmospheric tone, Resident Evil Village really isn’t that scary. In fact, this section being so effective and coming so early on, it almost numbs you to the rest of the game. Nothing else comes close. Aside from a few crafty jump scares, I never found myself hesitant to explore or to throw myself into dimly lit rooms. I had a fully-upgraded shotgun and five pipe bombs, if anything threatened to mess with me I’d roast them into oblivion. Even when I’m pitted against its greatest conceivable horrors, I seldom felt overwhelmed, knowing that I had more than enough in my arsenal to deal with any and all threats before me.

Perhaps the novelty of its new first-person perspective has worn off, or Capcom was afraid of making us subject to momentary instances of weakness in the service of horror. Even if it meant abandoning series staples such as the magnum or grenade launcher, I’d much rather be scrounging for pistol ammunition in the face of overwhelming odds than blowing the majority of my problems to pieces with a sniper rifle. It’s a sour detachment from the survival horror identity that Resident Evil 7 did such a beautiful job of reintroducing, and I hope whatever comes next is able to hold onto that. 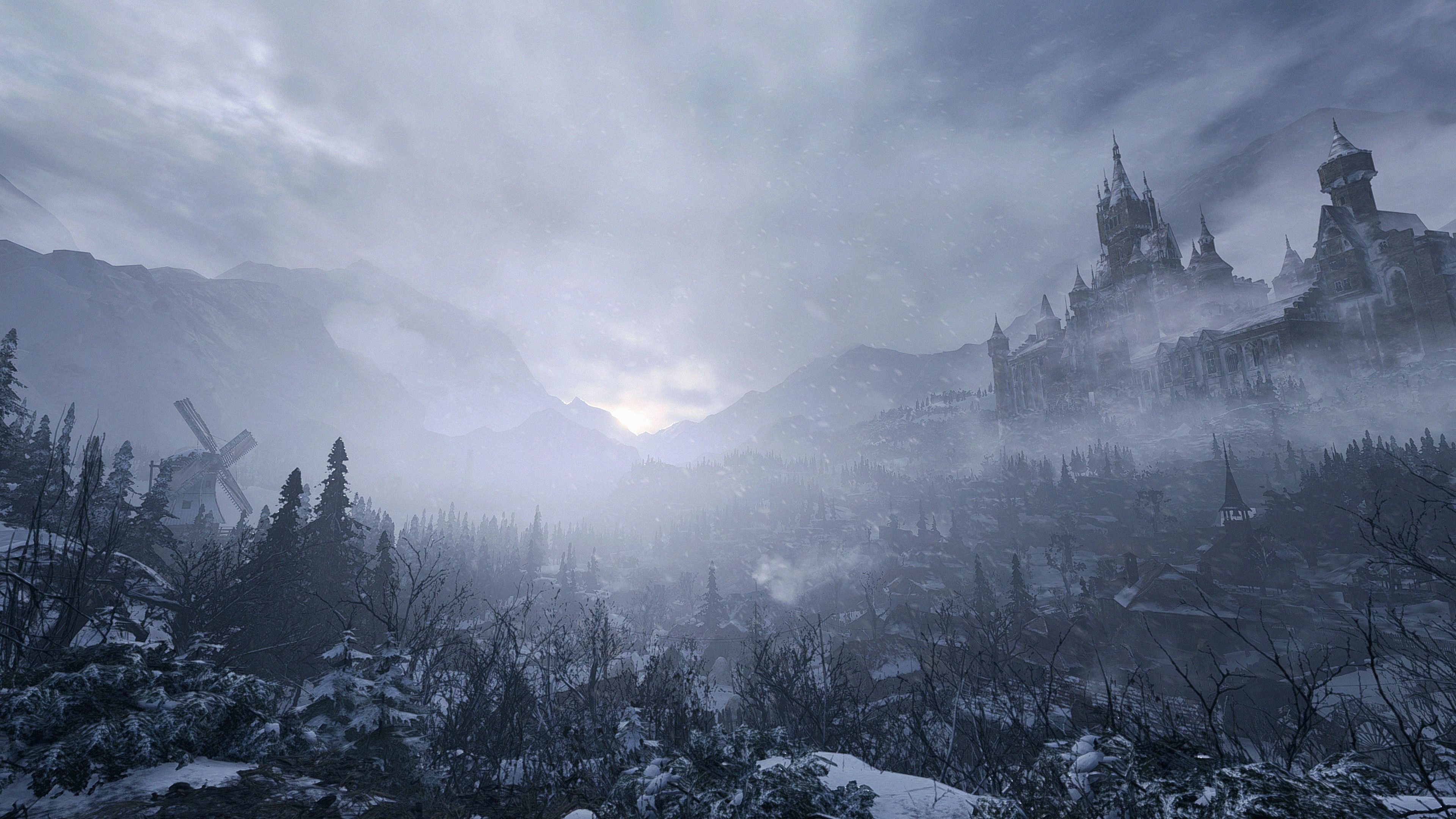 If you aren’t opposed to a greater focus on action, Resident Evil Village does not disappoint. It’s an absolute blast, with each act introducing fun and creative twists on existing enemies and environments that never failed to pull me into a false sense of security. It’s not a scary subversion of my expectations, but it always ensures that combat remains fresh even if the enemies don’t – and this mantra remains true right up until the credits roll. The campaign isn’t too long, coming in at roughly 10-12 hours after hoovering up the majority of collectibles. This isn’t a flaw, since like all games before it, Village feels fine-tuned for speedrunners to master in the months to come.

Mercenaries also unlocks after beating the main story. Much like the original, it feels like a hastily thrown together gauntlet of combat encounters where you must strive to achieve the highest score possible. It’s a triumphant return for the mode as I found myself losing hours to chasing high scores and that elusive “SS” rank. Alongside this there are oodles of behind-the-scenes clips, figures, and other bonus content to be unlocked with repeat playthroughs. It’s a very generous package, dwarving contemporaries with everything it has to offer. 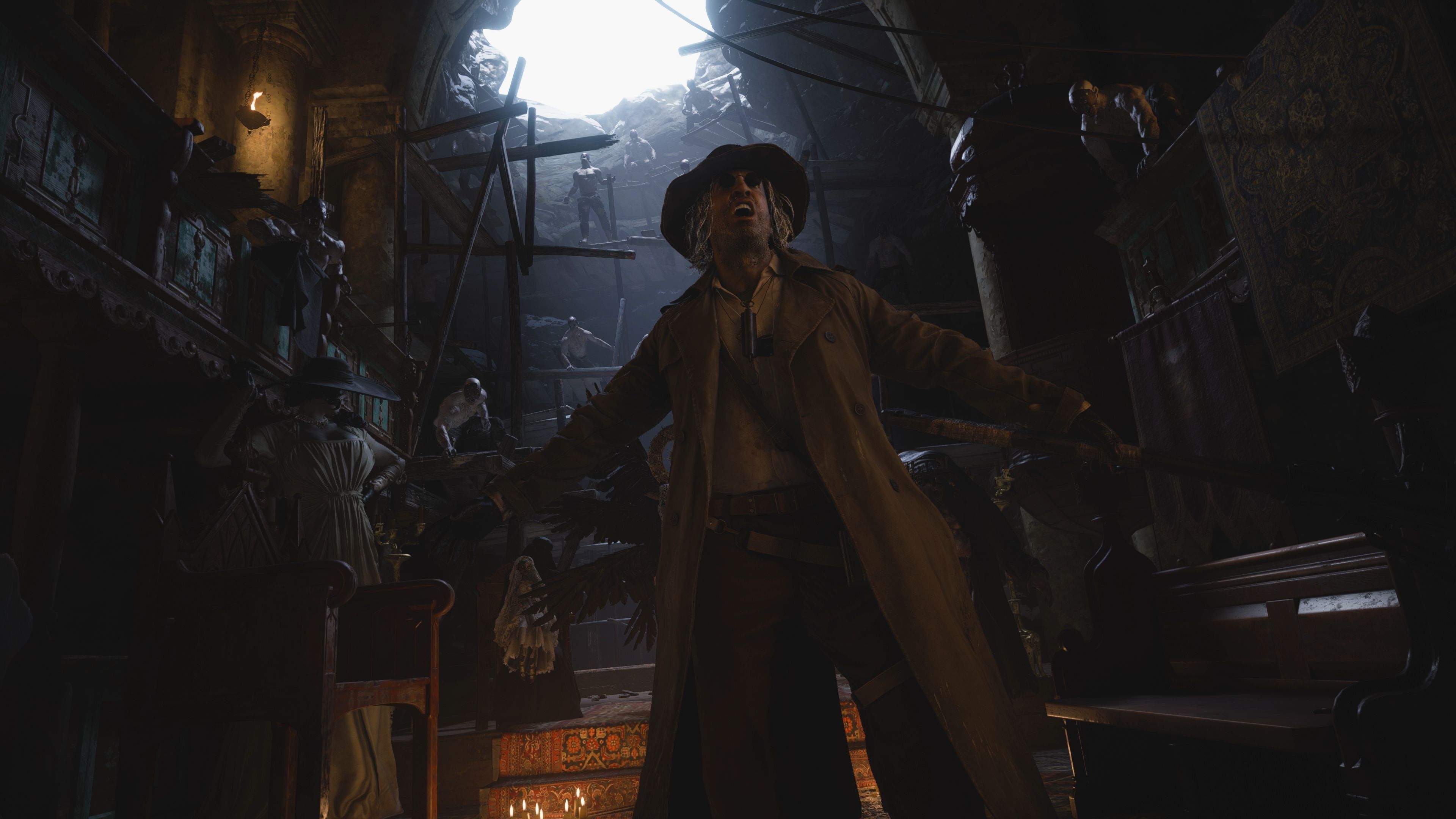 Resident Evil Village is yet another stroke of genius from Capcom as its modern ambitions for the franchise finally come full circle. The first-person perspective has been combined with the pacing and ideas of Resident Evil 4 to craft an experience that feels both refreshing and nostalgic in equal measure. In conclusion – it’s fantastic, but not without a few flaws.

Its attachment to the past can hold it back from greatness, especially in regards to its dedication to bombastic set-pieces and a hesitation to explore its own ideas. Village is drenched in excellence throughout, but the occasional fumble stops it from reaching the heights of both its predecessor and the seminal masterpiece it is so desperate to imitate. There’s also not nearly enough big lady – she needs her own game.

We tested Resident Evil Village on PS5 and a review copy was provided by Capcom.