“Wait… I know that name!” shouts Ceana. “That’s that bastard who grabbed my arse the other day at the pub! Well, if you want to give him that feather, be my guest – I’m not going anywhere near him and his wandering hands.”

This dialogue is remarkable for a number of reasons. It’s concise but extremely dense, articulating quite a lot with very little. It also feels natural – “that’s the bastard from the pub!” – and can be easily parsed without having to suspend disbelief, which is obviously important for a fantasy game like Final Fantasy 14. 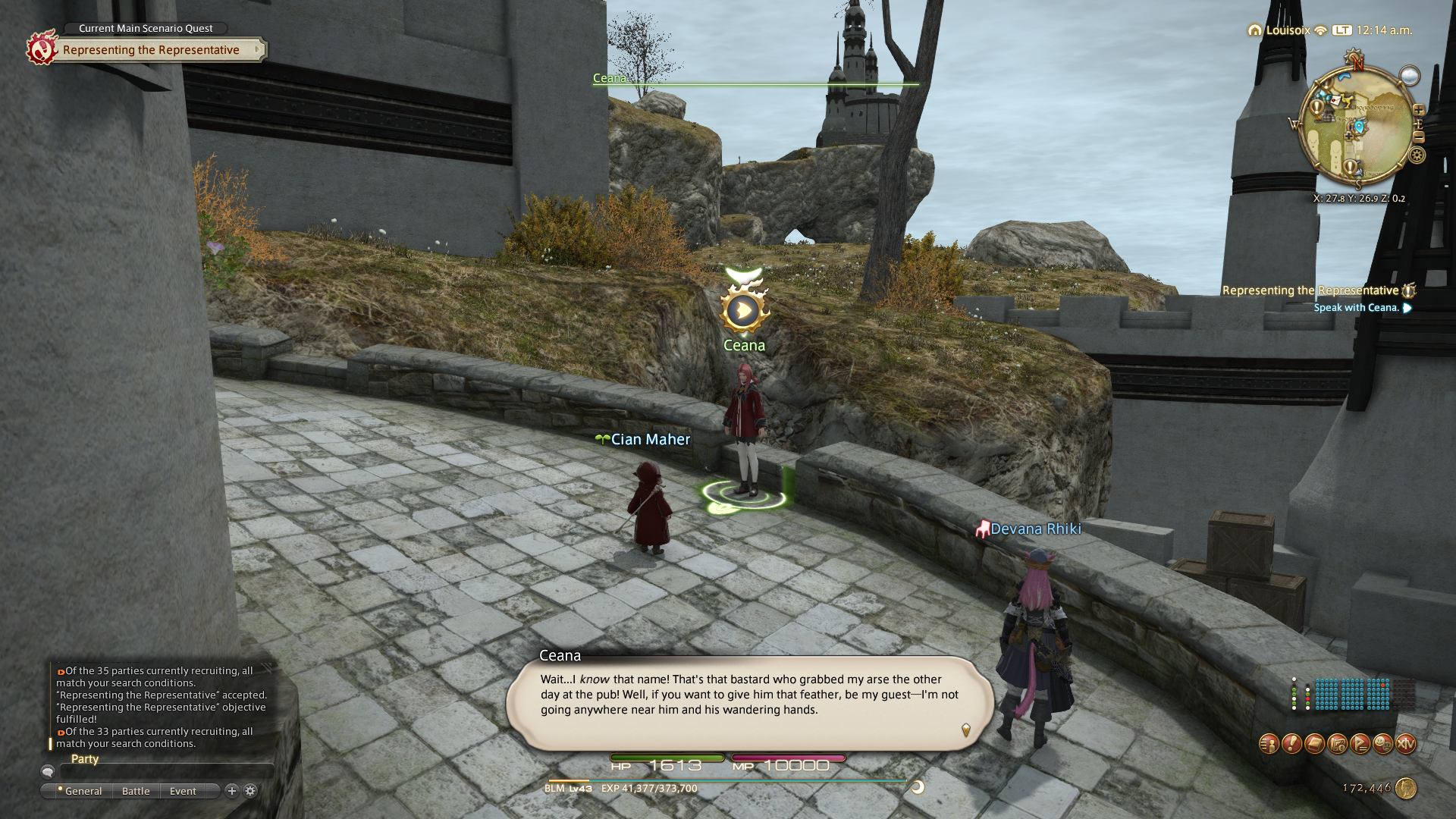 But the best thing about this is that it’s specific to Ceana, and to Aleport, and to this very precise region of Eorzea. In Final Fantasy 14, dialogue isn’t just used for narrative exposition – it’s charged with all kinds of extra worldbuilding potential that speaks to elements like geography, class, history, and culture.

Take the example above: Ceana is a talented scholar of wide renown, but she’s also from Aleport. Here’s the official in-game description of this boozy harbour town:

“Unlike water, ale will not go stagnant on long sea voyages. Thus, many ships put into this, the second harbor on Vylbrand, to fill their holds with the stuff. Subsequently, Aleport does a goodly trade in grog, a trade encouraged by low taxes on various brews. Less well known, however, is that this was a stratagem specifically designed to prevent large vessels from clogging the port of Limsa Lominsa.”

Like Ceana’s dialogue, this is densely packed with context. By considering the two alongside one another, Ceana’s mode of speech makes sense. Words like “bastard” and “arse” are consistent with a town packed with sailors and booze, while “wandering hands” resembles the abstract color of a regional dialect more interested in the spoken word than its written equivalent. We can garner a lot of what constitutes Aleport’s overall atmosphere simply from connecting the cadence of its inhabitants’ speech to their surroundings – and this is just a single example from a single area. This idea permeates every line of dialogue in Eorzea, all of which are deeply committed to characterization and worldbuilding, as opposed to the more hollow NPC speech we see in plenty of other games.

Let’s consider another example, this time in Eastern Thanalan. After completing the general Thaumaturge quests in Ul’dah and deciding to specialize as a Black Mage, you’ll eventually be tasked with meeting Kazagg Chah, an outcast of the Amalj’aa. When you speak to him, he says, “Well come, Lalafell, chosen of Ququruka and bearer of the Gem of Shatotto.” 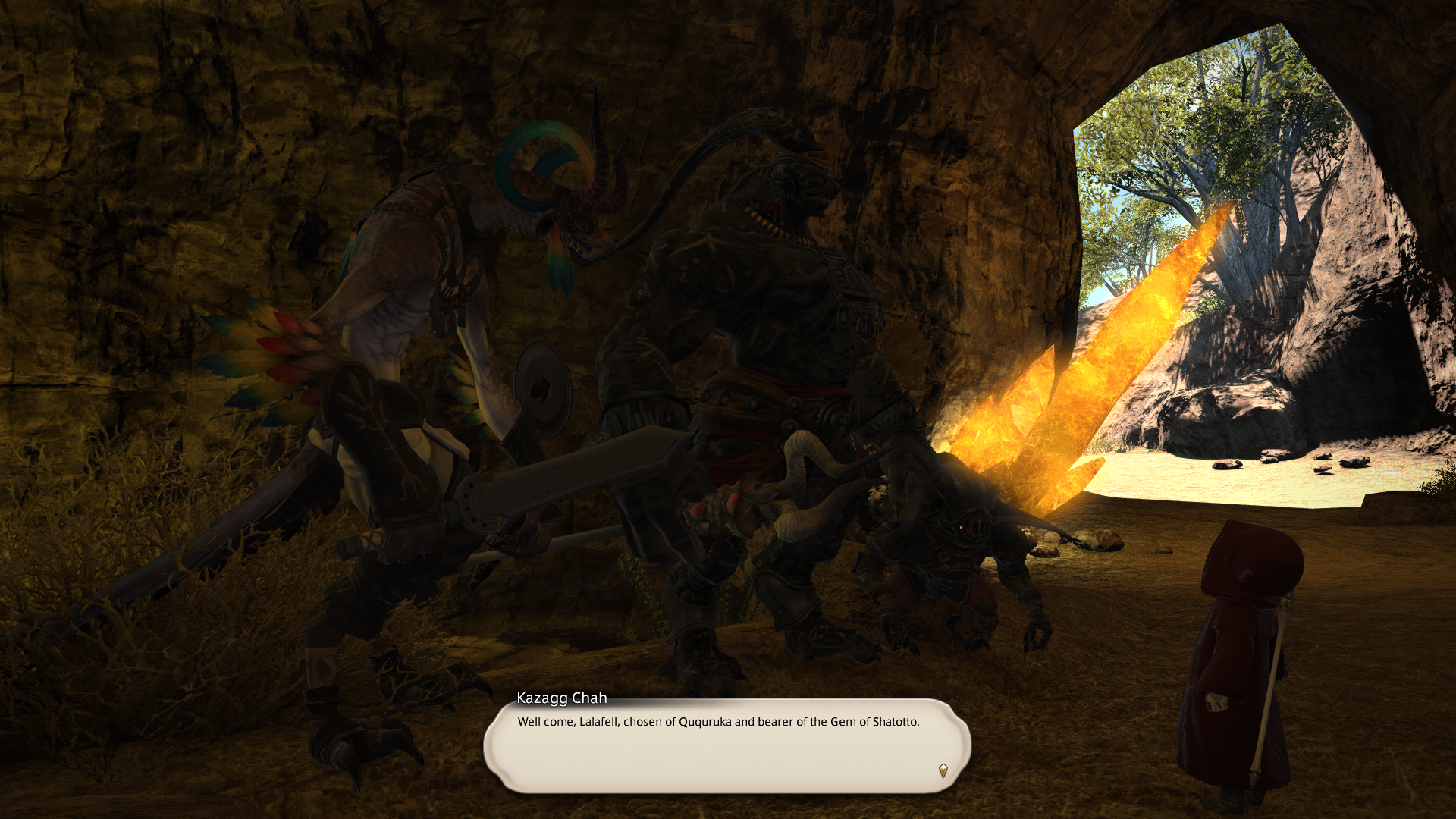 Again, there’s a lot going on here. Aside from the syntax being indicative of Kazagg Chah’s clear investment in elements of the arcane – and, by extension, his commitment to having become an outcast – the “well come” part might look like a standard case of poor subtitling. It is not.

This is a basic example of code-switching, something that happens all the time in Final Fantasy 14. I chose this screenshot specifically because I haven’t captured many other instances of this happening recently – I don’t stop and interrogate every single line of decent dialogue. Only most of them.

Code-switching, put simply, is a linguistic device used to create cultural context in writing. It involves a conscious change in style, to the extent that language either borrows words from another language, or intentionally misspells words so they can be read phonetically. Here’s an example from Charles Dickens’ The Pickwick Papers:

“Sorry to do anythin’ as may cause an interruption to such wery pleasant proceedin’s, as the king said wen he dissolved the parliament.”

This is designed to be read in a certain accent, at a certain pace, with a certain tone. And so when we see Kazzag Chah say “well come,” it’s not a bastardization of welcome, nor is it a mistake by the localization team. It’s a low and slow greeting that’s stretched out. It’s loud but soft – “Wellll-comeee, Lalafell.”

Another example that springs to mind is from George Orwell’s 1984:

“‘Top ‘ats!’ he said. ‘Funny you should mention ‘em. The same thing come into my ‘ead only yesterday, I dono why. I was jest thinking, I ain’t seen a top ‘at in years. Gorn right out, they ‘ave.’”

Meanwhile, Chinua Achebe’s Things Fall Apart contains this impressively meta line that goes beyond phoneticism and speaks to how certain people have a highly specific way of conversing that is deep-rooted in their own culture:

“Among the Igbo the art of conversation is regarded very highly, and proverbs are the palm-oil with which words are eaten.”

I think all of these examples are applicable to the two pieces of dialogue I’ve pulled from Final Fantasy 14, but I want to draw your attention to another line. This one’s spoken by a guard in Camp Dragonhead: 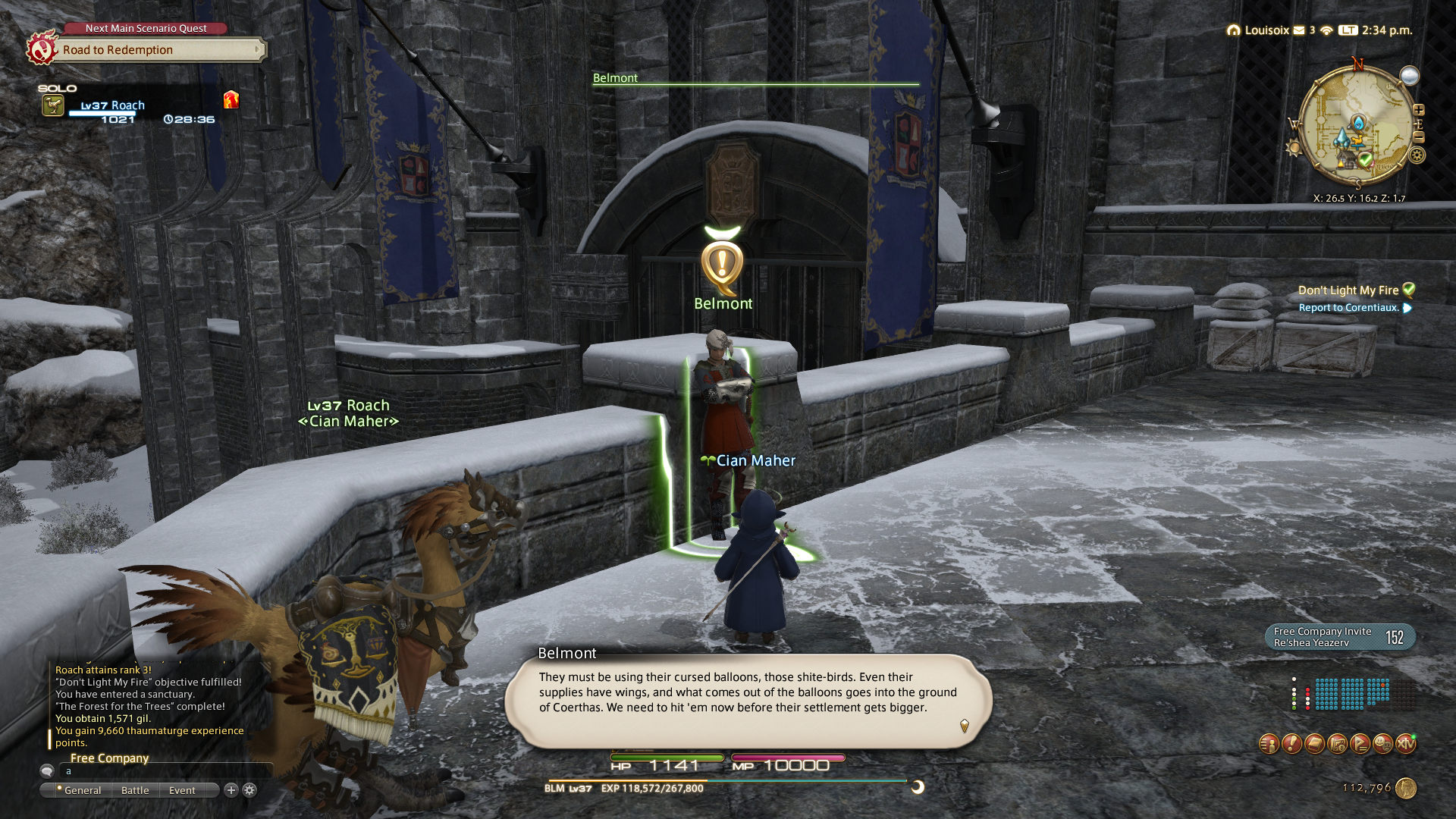 “They must be using their cursed balloons, those shite-birds. Even their supplies have wings, and what comes out of the balloons goes into the ground of Coerthas. We need to hit ‘em now before their settlement gets bigger.”

I’m not sure about you, but I adore “shite-birds.” Also, everyone in Coerthas says this – that’s what I mean when I say that these small things contribute to a much larger cultural context across each of Eorzea’s specific regions.

While most of the time this is the case – that dialogue reflects not just the speaker, but their surroundings – there are occasions where Final Fantasy 14 just goes balls to the chocobo and lets a character go wild. As an Irish person, I have to admit – I feel quite a strong connection to the sylphs of Little Solace. 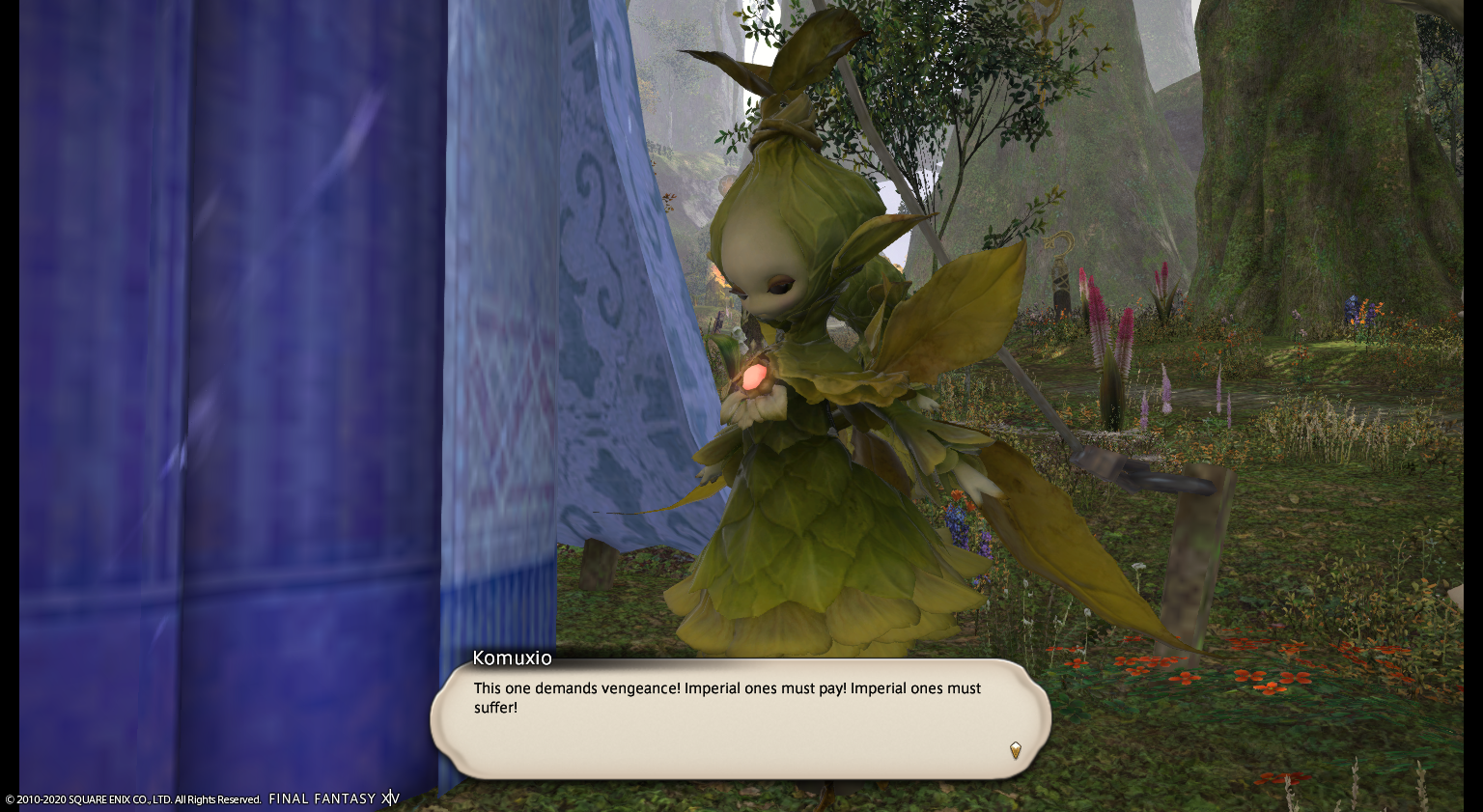 I think the context here is pretty self-explanatory, but also, it’s just another excellent articulation of a unique cultural context through dialogue – and it’s anti-Imperial. Brilliant.