I remember seeing Venom in the cinema with my dad and brother on opening night back in 2018. I knew precious little about it going in, save that Tom Hardy was flexing his Legend experience to play both Eddie Brock and Venom – who are technically the same person, but have very different personalities. Critical consensus, though? Mate, I went straight from work. I didn’t even know the film was out until I was ordering my popcorn.

About 20 minutes into Venom, I sat and thought to myself, “This is my favourite Spider-Man movie of all time.” Yes, there’s no Spider-Man, but Venom is a Spider-Man villain, eh? Also before you ask, I’ve seen all of the Spidey movies. Into The Spider-Verse is my favourite Spider-Man flick that actually features someone who can do whatever a spider can – several of them, in fact. You might reckon it’s blasphemous for me to say Venom is better, and more power to you if so. But do you know what? I’m allowed to have my own opinion, and if you think it’s a bad one, cool. If your opinion is that Venom isn’t the best Spidey film, then I think your opinion is bad too, so we’re even.

Venom is a campy cacophony of cackles and carnage (eh? eh?). It is outlandish in the best possible way, and that is precisely why it’s better than every other Spidey film. Take Raimi’s original outing with Tobey Maguire, who, in the first Spider-Man, essentially played the same character as he did in Fear and Loathing in Las Vegas. He somehow manages to be simultaneously doe- and glassy-eyed at all points in time, except for when he backflips over Willem Dafoe’s sweet hoverboard and inadvertently kills his best mate’s dad.

That brings me to my next point: aside from Spider-Man 2, Sam Raimi’s Spidey trilogy is an unintentional comedy. It is an extremely important cultural artefact for its part in defining the modern superhero blockbuster, with Jon Favreau’s Iron Man – the genesis of the MCU – owing a lot to the most famous Spidey films in recent memory. But when Willem Dafoe throws a pumpkin bomb at a bunch of innocent bystanders and they immediately disintegrate into skeletons, that is comedy. When Willem Dafoe smashes a vial on the ground for no reason, and his assistant in the background of the shot looks at it as if to say, “For fuck sake, I have to clean that up now,” I simply could not stop laughing. When Willem Dafoe – look, you get the point. Willem Dafoe looks like he is having so much fun in that first movie, and the Green Goblin went on to haunt each subsequent flick in more ways than one.

Like, do you remember the skull scene in Spidey 3, where Peter just sort of lies there hallucinating and all of a sudden multiple skulls show up on screen?! I like the stories, Doc Ock is great, and Spidey 3 could have been brilliant if it chose to focus on one (1) villain, but I do not think Sam Raimi’s Spider-Man is beloved for the reason it wanted to be. Venom, on the other hand, emphatically leaned into the campiness that makes so many modern superhero movies resonate with non-superhero fans, like Thor: Ragnarok and Guardians of the Galaxy. However, it also focused on an anti-hero, and it didn’t rely on some ostensibly fictional act of overwhelming altruism. It’s about Tom Hardy chatting to his local shopkeeper and having to convince Venom that no, he cannot bite her head off. It’s about Tom Hardy trying to speak to his ex and making a total show of himself. It’s about Tom – look, check out my previous paragraph about Willem Dafoe, right, except bear in mind that everything is intentional this time around, and considered, and structured in such a way that you’re laughing with it instead of at it. 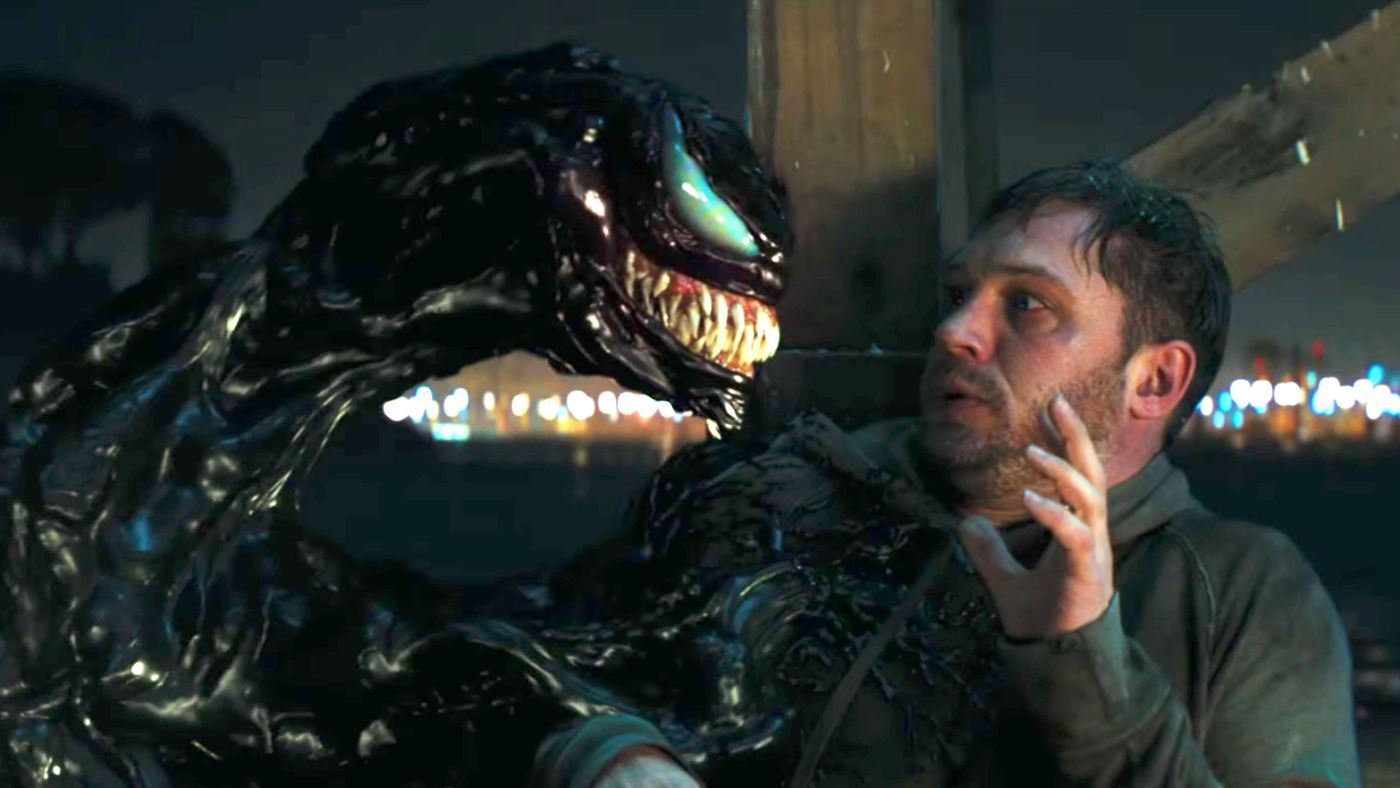 I don’t need to talk about the Garfield movies because we all know how each and every one of us feels about them – cool skater bro Peter Parker is even worse than Fear and Loathing in Las Vegas Peter Parker. I really like the Holland films, if I’m honest, and Michael Keaton and Jake Gyllenhaal were excellent in them. I also think Tom Holland is both a fantastic Peter Parker and Spider-Man, which is no easy feat. But still, Homecoming and Far From Home have nothing on Venom. They’re funny, and cute, and feelgood, and they are legitimately captivating for the most part. But: does Venom use symbiote tentacles to sling a dumbbell at a mobster’s balls? Does Venom go full Bilbo Baggins in Rivendell and explode through Eddie Brock’s face to scare a metalhead? Most importantly, does Venom tell Eddie to jump off a 20-story building and call him a pussy for not doing so? No, no, and no. Case closed.

Into The Spider-Verse is a masterpiece, a bona fide gem in both contemporary animation and superhero film design. Venom, however, subverts all of the tropes that allow you to know how a superhero film is going to end before it even begins. I mean, it’s not really a superhero film, right? It’s an anti-hero narrative that unapologetically indulges in its own absurdity to offer an experience that is just fun. I usually dislike that word, “fun,” because of how meaningless it can be when there are far more specific and descriptive qualifiers when it comes to measuring something, but Venom earns its fun badge – in fact, Venom earns all of the fun badges. And now it’s got Woody Harrelson playing Carnage? Are you kidding me? This is going to be even better than the first one, meaning that Venom 2 and Venom are going to be gold and silver medalists in the marathon for best Spidey flick. Honestly, I can’t wait to watch Tom Hardy and his extraordinarily funny parasite take the piss for two and a half hours on screen all over again. I’d take that over self-serious drama or unintentionally funny comedy every day of the week. I mean, come on. These are stories about people who get bitten by radioactive spiders and use webs to catch trains in midair – at least let us see a shapeshifting symbiote from outer space call Tom Hardy a loser.